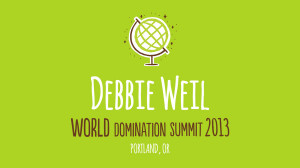 Loyal readers know that I was relieved to make the discovery that a gap year, according to the British definition, is 15 months long. We’re at the end of the twelfth month. That means we’ve got a few more months to close out a year of reinvention.

So what have I learned? What is the biggest takeaway? Is reinvention possible? I can’t answer the last question yet. And maybe I don’t need to. One of the things I have come to appreciate this past year is that a change in mindset happens slowly, even imperceptibly. So even if reinvention were possible you wouldn’t experience it in a flash.

As an example, Sam was already comfortable last fall with the idea of selling our house in D.C., our home for the past 32 years. It took me many months to come around to that decision. In fact, the idea didn’t gel til about May 1, 2014.  When it did, I swung into action… even as I felt twinges of ambivalence. We moved down to D.C. for a month. I lined up painters, trash haulers, furniture movers, a stager, etc., to empty out the house and make it look its best. Approaching the sale of our house this way means I really can’t change my mind. The train has left the station.

As I write, regret and sadness about leaving D.C. are mixed in with excitement about moving forward to new possibilities. At the top of the list is a plan to rent an apartment in Brooklyn this fall for three to six months. Brooklyn, it is clear, is the antithesis of Stonington, ME. It is everything that the coast of Maine is not: high volume, dense, overflowing with restaurants, shops and museums. As well as a place I can meet with clients, put on face-to-face workshops, network with the publishing world, etc. We also have two grandchildren there.

The most significant takeaway for me, at the end of 12 months, is that I am finally more comfortable embracing uncertainty, as the tagline says. Except for the past few weeks of discombobulation, as we pack and sort and clear out the house, not knowing exactly what comes next feels good. It’s the new normal and I have adopted it.

With that, I’ll stop and invite you to listen to my three-minute  talk at last summer’s World Domination Summit in Portland, OR. The topic was “embracing uncertainty” and why that’s a good thing. The responsive crowd of over 3,000 was the biggest I’ve ever addressed. If you don’t see the video below, click here.

View all posts by Debbie Weil →
Hands-On Grandparenting: Another Chance to Be a Parent
Report From the Void: Sam’s Reflections After 12 Months