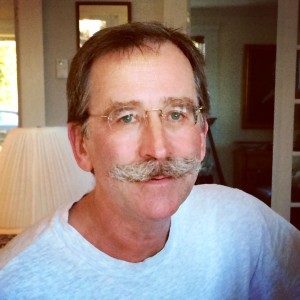 I shaved off my mustache yesterday. I am pleased to note that I recognized the newly familiar face in the mirror. Eight weeks to grow – and gone in a few moments.

I grew it for the show, The Last Ferryman. I had hoped it would help me to channel my character B. Lake Noyes, M.D., the only doctor on Deer Isle from about 1900-1946. It did not help much as each time I tried to relax on stage and become my character, I missed some lyrics, dropped a line or exited incorrectly.

But it did take on a life of its own. Several people on the street commented, independently, “Nice mustache.” My sister suggested it should have its own zip code.

The sensual pleasure of a mustache 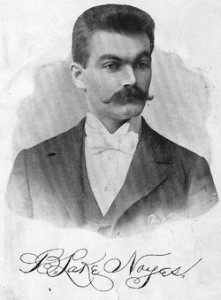 It had come to control my life. I was constantly stroking it. The sensual pleasure of stroking a mustache is hard to explain. It must relate ontogenetically (Ed. note: a developmental biology term relating to the developmental history of an organism within its own lifetime) to the sensitivity of whiskers that dogs and cats use for position location and spatial orientation.

The coarseness of the hair when it is rolled into position rewards the finger tips and the tug on the upper lip rewards the primitive feline reflex. The luxury of lushness on the sensitive skin of your face compares favorably to the lank and thinning hair of one’s insensitive scalp.

With unfortunate regularity, however, a rogue hair would spring out of line and bristle its way into a nostril or over the upper lip. Like a stiff wire it would noxiously tickle, demanding attention in the form of a smoothing stroke or a scissors trim. Mustache wax was a consideration that I regularly discarded as too complicated and too vain. One step too far in mustache maintenance.

Debbie was constantly commenting on it. “It smells funny” or “It’s too prickly,” were daily remarks. I kept trying to clean it. I applied soap, shampoo, water and tissues frequently in an effort to tame it.

Enjoying a beer many times over

Meals required added attention so as not to befoul it with sauce. But a pint of beer with a good head could be savored many times over as the hoppy foam was squeegeed out of the baleen (Ed note: the filter-feeder system inside the mouth of a baleen whale) by the lower lip.

I will miss it, but not much for now. And, I have all winter to grow it back.

View all posts by Sam Harrington →
The Letdown and the Lessons: Sam’s Time on the Stage
Onward: Sam’s Gap Year Wrap-Up

One Response to A Mustache With Its Own Zip Code