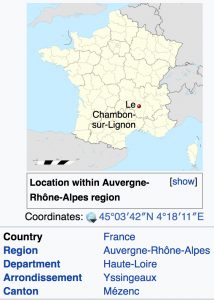 Sam and I fly to France tonight to make a second pilgrimage back to the boarding school I went to half a century ago. But it’s more than a trip down memory lane. This time, I am aiming to make sense of the extraordinary history of the French village of Le Chambon-Sur-Lignon, especially as it is intertwined with the history of Le Collège Cévenol. And yes, murder and mystery are involved.

Le Chambon is in south central France in the rugged Massif Central. My parents sent me to this remote village in 1966 – 1967 to attend Cévenol for my ninth grade year. A shy, introverted child, it never occurred to me to protest. And in fact,  I loved the experience (the school was co-ed!) and loved becoming semi-fluent in French. Maybe they knew I was ready for an adventure (my first “gap year,” if you will) after a sheltered experience attending the same day school for ten years with the same small group of friends. 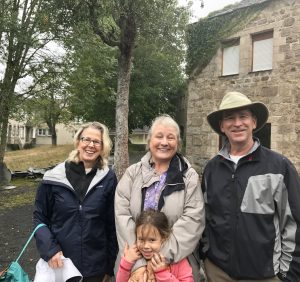 Sam and I tour Cévenol’s campus in August 2017 with Josiane Escotte, who was in charge of the girls’ dorm.

Cévenol was founded in 1938 by two Protestant pastors in Le Chambon who were continuing the Huguenot tradition of nonviolence and resistance to political and religious persecution that began on this remote plateau as far back as the early 18th century. The tradition of resistance included hospitality towards refugees and led to the remarkable story of the citizens of Le Chambon and surrounding villages risking their own lives by taking in and hiding several thousand Jewish refugees, including children, during World War II.

Thus Cévenol’s history has always been intertwined with that of Le Chambon. The two pastors, André Trocmé and Édouard Theis (and their wives), are credited with orchestrating the effort which saved hundreds of Jewish children from deportation and certain death at the hands of the Nazis. Of course some of the hidden Jewish children were early students at Cévenol. I am not certain how much my parents knew of this history of the school when they sent me there in the late 1960s. 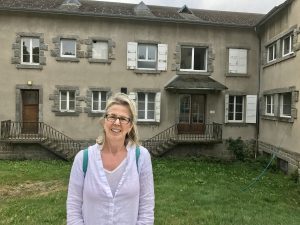 In front of Milflor, the girls’ dormitory, in August 2017. Just as I remembered it.

But they surely knew that Protestant meant no frills as far as accommodations and meals, and chores that included cleaning toilets. They also knew that Cévenol was an international school that was distinguished by openness and tolerance and that welcomed students from any religion and ethnicity.

Cévenol’s heyday was from 1938 – 1970 when it was a private lycée. From 1971 on it became part of the French national education system and was a private / public entity. It is here that the plot thickens. Apparently the school’s finances were not well managed and enrollment began to decline in the late 1990s. A succession of school directors couldn’t stop the decline and, according to some, the school’s standards were loosened. In about 2010, a student named Matthieu Moulinas was accepted and enrolled as a boarder. He had been convicted of rape and had served a three-month sentence but this fact appears to have gone unnoticed, or was not reported by the then school director. You can see where this is going.

On November 11, 2011, he murdered 13-year-old boarding student Agnès Marin, after inviting her into the woods to look for hallucinogenic mushrooms. He raped her, stabbed her 17 times and then burned her body. Less than three years later, Cévenol closed its doors for good. Moulinas has been sentenced to life in prison.

This was the story that Sam and I tried to understand when we visited one year ago. Now we are returning to make sense of a bigger story: the terrible irony that a school founded on the principles of non-violence and pacifism should cease to exist… after a murder. This is what I’m calling the “mystery,” although it is not entirely mysterious. Fingers were pointed in every direction after the murder: the lax director of the school, the French judicial system for allowing a teenage offender to go free, local psychologists who didn’t pay close enough attention to Moulinas, and more.

As you can see, this is kind of complicated. And it is doubly so because we must try and understand everything in French. But it fascinates me. 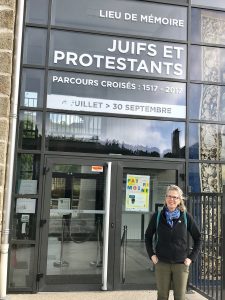 The museum in Le Chambon honoring the heroism of local inhabitants which saved thousands of lives.

In order to have a better chance of making sense of the irony, Sam and I are embarking on a five-day séjour linguistique in Lot et Garonne (near Bordeaux) to revive our French speaking skills before driving across France to return to Le Chambon. You may recall our séjour linquistique on Belle-Isle-en-Mer (off the coast of Brittany) of three years ago. Wish us luck!

P.S. It is quite possible that certain facts in this account are incorrect. If so, it is entirely my fault and I will correct them.

View all posts by Debbie Weil →
Bad Blood: Worse than deception is false premise that more blood tests prevent disease and death
The year of AT PEACE and what comes next

6 Responses to Back to France for Memory, Murder and Mystery