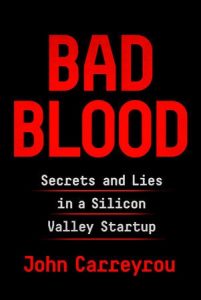 Debbie and I recently devoured the audio version of this summer’s hottest read: Bad Blood: Secrets and Lies in a Silicon Valley Startup by Pulitzer Prize-winning Wall Street Journal reporter John Carryrou. It’s a mesmerizing business thriller about the rise and fall of blood-testing startup Theranos, a Silicon Valley unicorn with a one-time value of $9 billion.

Carryrou masterfully recounts the story of Elizabeth Holmes and her co-conspirator Sunny Balwani as they raise over $700 million for a finger-prick blood-testing device they insist will change the world.  Their greed, their lust for power, and their sociopathic lack of concern for causing patients direct harm is stunning. They used Non Disclosure Agreements as bludgeons to hide the truth (the devices didn’t work) from their employees, their high-profile board of directors (none of them scientists) and consumers of their product (doctors, pharmaceutical companies and the giant Walgreens chain which installed blood-testing centers in their stores).

Scores of employees who signed the NDAs either quit or were fired and dared not speak up. The pharmaceutical companies, unconvinced by Theranos’s demonstrations, never communicated their concerns to others. No one, it seemed, could penetrate the Madoff deception-like narrative that Holmes constructed.

Indeed (and this fascinated Debbie) major media, including The New Yorker (One woman’s drive to upend medical testing) and Fortune (This CEO is out for blood), were almost entirely duped by Holmes’s misleading claims about how her blood-testing devices worked and how they would revolutionize healthcare. Then along came Carryrou to slowly dismantle this house of cards with his investigative reporting.

The massive falsehood everyone seemed to miss

Underlying all this, not clearly articulated by Carryrou, and ignored by most observers, is the central untruth that delivering more commercialized medical access will change and save the world. This barely-questioned premise captivated investors and a celebrity board of directors but it is a massive falsehood.

Ms. Holmes’ vision was that in the privacy of their homes, and at the time and frequency of their choosing, patients could test “a single drop of blood” for any of several hundred diseases, diagnoses, chemicals, and conditions. Citing the premature death of a “beloved” uncle from metastatic melanoma (in reality she rarely saw him or cared about him), she alleged that with a pinprick of his finger he could have diagnosed his cancer early and been saved from his fate.

Accepting this scenario as likely, and indeed fact-based, investors poured money into her project and directors and lawyers shielded her from unmasking. Most saw vast profits from this snake-oil pitch. Some, based on a desire to do well by doing good, apparently believed that creating more access to unregulated medical analyses would change the world for the better.

The reality is that unfettered screening programs do generate vast profits at a great cost to consumers. But unfettered screening tests under the guise of preventative medicine also lead to the overdiagnosis and overtreatment of large numbers of patients, obscuring the identification of the few patients who truly benefit from controlled screening and early diagnosis.

Currently, there are blood tests that serve as markers for a variety of cancers. During my decades of clinical practice the use of these markers rarely, if ever, were of significant clinical benefit to my patients. When they were negative, they offered some immediate, but never long-term, comfort. And when they were positive one of two scenarios played out. Most commonly they were falsely positive, meaning that the patient had a test indicating they had a cancer when they did not.

Under this circumstance, endless costly and potentially dangerous testing was undertaken to prove a negative (which, of course, is impossible). On the occasions when the cancer blood test was truly positive, the cancer was generally so advanced that the clinical outcome was predetermined.

The promise of perfect, effective, screening programs has proven ephemeral. And the idea that more medical intervention leads to better outcomes is an unshakable (yet inaccurate!) premise of American healthcare. Putting the power of indiscriminate testing into the hands of consumers, as proposed by Theranos and others, will indeed sell products but it will cost lives.

Instead, if we want to save lives, we should stop over-promising and under-delivering. We should more realistically appraise what works and what doesn’t. And we should not allow poor science to hide behind NDAs.

View all posts by Sam Harrington →
Déja Vu All Over Again: Three Physicians:
Back to France for Memory, Murder and Mystery

One Response to Bad Blood: Worse than deception is false premise that more blood tests prevent disease and death