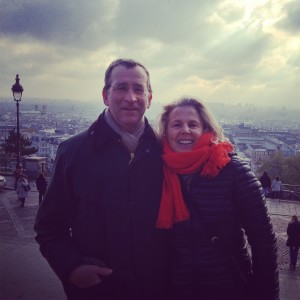 What do an American physician, a German hausfrau, an Armenian priest, a Vietnamese nun, a Peruvian mother, a Philippine economist, and university students from Italy, Poland, Mexico and Ohio have in common? The answer is French lessons at the Alliance Française. What else do they have in common? An atrocious French accent.

We have been in Paris for just over two weeks. During that time we have tried to assimilate; we have taken French lessons; and, we have suffered from writer’s block. 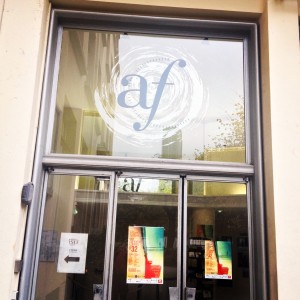 The effort of relearning some of our French grammar and recapturing some of our previous triumphs in Gaul has been exhausting. That’s my excuse for why we have not applied fingers to keyboard.

I find Paris far too stimulating. Not only am I constantly trying to formulate and rehearse my next French phrase but I am trying to read and understand the billboards and signage whilst acting sufficiently cosmopolitan that I do not invite immediate dismissal.

Classes at the Alliance Française have been eye-opening, frustrating and well worth the effort and expense. Each class has some devoted Francophiles, some lazy students, some engaged students, and some focused immigrants hoping to advance their French enough to gain local employment. It is an inspirational mix of geniality, desperation and commitment. Only the accents leave much to be desired. A few minutes of fractured French with an Armenian, Philippine, Chinese or Brooklyn accent will leave your ears bleeding.

But it is fun to mix with all these groups, exchanging pleasantries and simple phrases, in a mutually safe and accepted environment.

Unfortunately for me, I wake up with nightmares of French verb conjugations running through my head. This has not led to a daytime conversational breakthrough. I can only hope for that day to come. 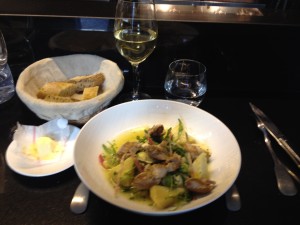 In addition to repeating our usual sequence of restaurant and museum stops we have extended ourselves to shop for a replacement ironing board cover, a down pillow and the best baguette in Paris (Eric Kayser). I found an affordable two-star restaurant specializing in French poultry (Le Coq Rico in Montmartre) where I discovered – and enjoyed – a salad of “sot-l’y-laisse.”

“Sot-l’y-laisse” is the expression for the two tender morsels of chicken found on the back of the bird, below the scapula and above the pelvis. We call the them “oysters” for they have a texture and flavor that is neither dark nor white meat. The French phrase (spoken as a single word) translates as “only a fool leaves them.” 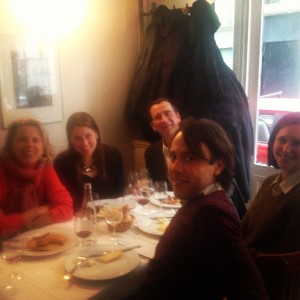 Today we shared a Thanksgiving dinner in yet another lovely restaurant (Timbre) with our daughter and two of her American friends. Duck and rabbit loaded our plates. Snails, mushrooms, cheeses, chocolates and wines filled out the menu and our stomachs.

Of course, neither our chef nor our Greek/French waitress knew or cared about Thanksgiving. We would be fools to leave behind the treasures of their table.

View all posts by Sam Harrington →
Deer Hunting: Mindfulness Without Maliciousness
Paris: Dark Corners in the City of Light