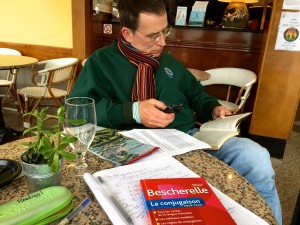 Studying French in a café

{Update from both Sam and Debbie} First, an apology for the hiatus on our blog. Debbie will be telling you more about that. In the meantime, I want to tell you about our French immersion during March.

It took three airplanes (we stopped in Barcelona and London), three trains, one bus, and one ferry to get to Belle-Isle-en-Mer, an island off the Brittany coast that is roughly the same size as Deer Isle in Maine. 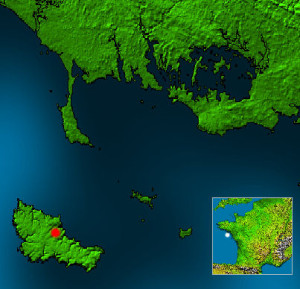 This was our destination for a French immersion, a follow-up to our séjour in Paris during our official Gap Year. While we loved our time in Paris, we both felt that getting outside the capital would give us more chance to practice our French – and perhaps in a kinder, gentle setting.

That proved to be true. More about our French speaking experience in a minute. First, some observations.

Belle Île is a medium-sized island, 45 minutes off the coast of Brittany. It is five by ten miles in dimension. It is populated by about 5,000 people during the winter and overrun by about 30,000 during the summer. Situated at 47 degrees latitude, Belle Îsle is a bit north of Deer Isle but it rarely freezes and never snows. Plant species from the Mediterranean thrive there. 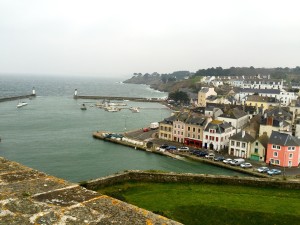 The permanent inhabitants are descended from several lines of fiercely independent fisherman and farmers struggling to maintain traditional lifestyles and values in the presence of a rapidly changing world. Rich Parisians have inflated land values over the past few decades and government regulations complicate fishing practices. To confound things further, retirees from around the world live full or part time throughout the communities. 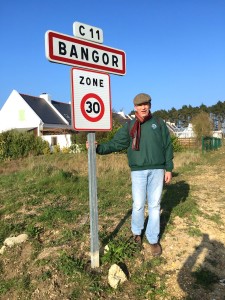 Sound familiar? It would if you wintered on Deer Isle. That’s what I mean by a busman’s holiday. We left the isolation of Deer Isle, where we hike and write and study, to travel to an equally isolated – and beautiful – island to do the same thing, more or less.

Like Deer Isle, Belle Île (or Belle Isle) has an inspiring history of intrepid fishermen and devoted farmers. Celts, Normans and others blended to create the Bretons who have populated this region for centuries. A separatist movement was strong in the ‘60s. Road signs remain printed in French and Breton. The isolation of their island further inspired the independence of the Belle Îloise.

Now, property rights, fishing standards, property values, farming standards, government taxation, ferry ticket costs, and fuel costs compete for focus with long hours of hard work in the fields or on the seas. Most farms are fully mechanized but draft horses are everywhere, adding to the quaintness and visual harmony of fields full of sheep and cows. 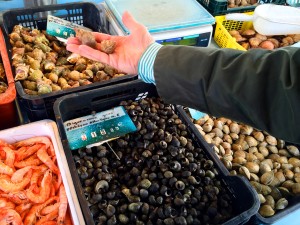 Fishing remains focused on netting and trawling. The daily fish market is full of giant spider crabs, and an assortment of clams, mussels, cockles and scallops. An enviably luxurious assortment of fish stalls allowed for dinners of fresh cod, sole, mackerel and plaice. Fifty five gallon drums of giant whelks and periwinkles reminded me that others see “fruit of the sea” where Americans do not.

Intriguing to my eyes, many of the commercial fishing boats have adopted catamaran hulls to accommodate the sandy bottoms of the harbor floor where they rest at low tide. Floats, docks and piers are rare on Belle Île. Moorings that bottom out are common. 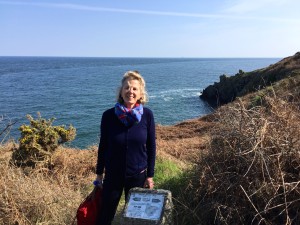 Hiking on the interior coast

Unlike Deer Isle, Belle Île is not surrounded by an archipelago of smaller islands with a moderating effect on the wind, weather and seas. Belle Île is miles from the nearest coast as well as miles from another three or four other island communities. The wind is uniformly fierce and the windward side of the coastline, usually that which is facing west toward the Atlantic, is routinely savaged by pounding surf. Small sand beaches and rocky outcroppings punctuate a coast of dramatic cliffs.

Of course French culture is readily apparent. Back-packed children march to and from school on shoulder-width sidewalks. Adults slip into and out of cafes throughout the day. They have a small beer, wine or coffee then move on to their next task. 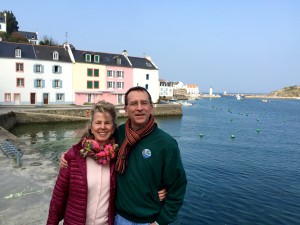 Stores close everyday for a two-and-a-half hour lunch, except on Saturdays when they stay open all day. Nothing is open on Sundays except the church and the occasional café. The narrow roads are empty after dark as the burgers make their way to bed.

Did I say the roads are narrow? Visualize two compact cars having to slip off the roads, giving way, ceding mirror space, to allow safe passage. No one slows down. 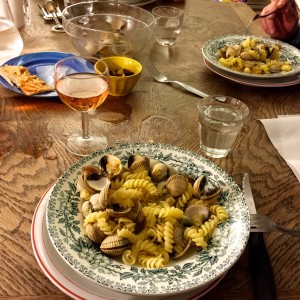 Our final destination was the hamlet of Borchudan in the interior of the island. Borchudan’s population is three during the winter (it swelled to five with our arrival) and about 40 during the summer.

Before leaving Stonington, we inquired what the street address was. Our host advised us to Google Borchudan: https://goo.gl/maps/rHbbr. The hamlet roads have no names.

Our host, Michel Denance, is a semi-retired language professor who supplements his income by receiving foreign guests for a week at a time and tutoring them intensively in the vagaries of French grammar. He was funny and erudite. 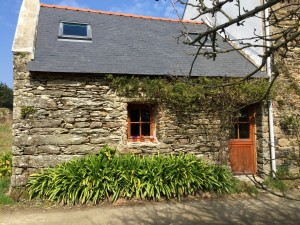 Our apartment attached to Michel’s house

Our eight-day stay with him was perfect. He lives in a small, centuries-old stone house with an even smaller separate (rudimentary) apartment attached to it. Distraction free, this was the perfect environment in which to improve our French.

Every morning, after brewing our own coffee and eating day-old bread with butter and honey, we stepped outside and next door to Michel’s house. There we sat at his kitchen table wearing layers of sweaters and scarves. It was decidedly chilly. His wood stove was always stoked but he seemed reluctant to turn up the radiator heat. 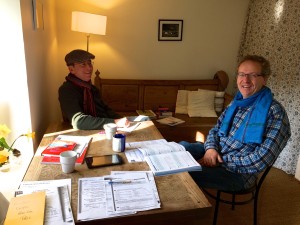 Lessons at the kitchen table

The French lessons were totally absorbing. We reviewed details of grammar that neither Debbie nor I have properly grasped (despite speaking halting French):

– the passé composée vs. the imparfait

And so much more. The French – and Michel – are serious about grammar and syntax. 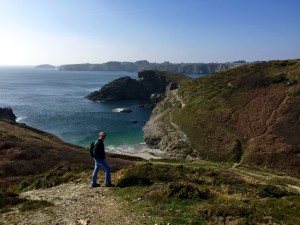 Hiking on the Côte Sauvage

The lessons continued informally throughout the day (we spoke French constantly) as we ate the simple lunch and dinner he prepared for us. He wasn’t exactly a vegetarian but he was a very thrifty cook, often using left overs. I’m accustomed to eating more at lunch and dinner but I supplemented with endless amounts of French bread and Breton butter (and returned home with pants that felt a bit too tight). 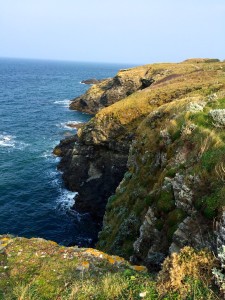 A highlight of the week was several social outings to visit with Michel’s friends (transplants from Paris), and to tour their remarkable gardens. In the afternoons, we hiked the cliffs of Belle Isle (breathtakingly precipitous), napped or rode bikes through the green fields to the beaches.

Michel was endlessly patient and flexible, finding a teaching moment in everything we said, including my halting attempts to recount notable stories from my medical practice. These he found hilarious and I suspect they have made their way all over the island, as he phoned his friends to tell them what the crazy American doctor said.

Debbie regretted that we were a little early in the season to see all the flowers and trees in bloom. It was still chilly in mid-March. Otherwise our French immersion was nearly perfect. Debbie is already making plans to return. I’m happy with what we had.

We stumbled onto Michel Denance and Belle Isle via a Google search: Home Stays and Immersion Programs in France

Note: Debbie edited this to add in a few more details about our stay with Michel.

6 Responses to A Busman’s Holiday on a French Island