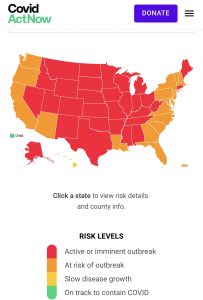 Raging across the country, COVID outbreaks are now in Maine.

Now that we have a new president-elect and can look forward to a new approach to the management of Covid-19, how will Joe Biden appeal to those citizens who see it as their constitutional right to intentionally disregard public health measures? A right they define as being able to assert their liberty and individuality. And, more important, how will Biden create the national will and cooperation that is required to change the course of this accelerating pandemic?

We Need a National Strategy and Nationalized Implementation

Over the last eight months, we have seen the results of a state-led response to a national problem and it has been a serious failure. Although few western countries have had an exceptionally good response to Covid-19, the per capita death rate in the U.S. is comparable to the worst rates in the world. It is dozens of times worse than where a central government has asserted real authority regarding testing and mitigation ( consider China, New Zealand, Australia, Taiwan, South Korea, and Japan).

The absence of a national health structure to address a national public health crisis is foundational to the disaster unfolding. So, what to do?

We will need national plans for diagnostic testing, assurance testing, quarantining, contact tracing, vaccine distribution and administration, and the associated compliance with each step to get this ship on course. But nationalized plans needs nationalized messaging.

What new arguments can we bring to the national discourse? I have several ideas.

Cooperation Must Be Earned, It Cannot Be Mandated

Simple mandates won’t work without scientific proof of efficacy. Asking people to wear a mask failed as one of several mitigation tactics. Wearing a mask was first perceived as a sign of individual weakness in the face of a minor flu-like illness. Subsequently, the wearing of masks was turned into a political statement that overwhelmed the scientific data and that aligned face-coverers with weak globalists and mask-less individuals with America First-ers.

But even achieving 100 percent compliance with mask wearing will not turn around the currently diseased ship of state. We need major education initiatives.

Our Constitution Requires Us to Promote the General Welfare

First, we need to debunk the concept that national mandates and policies, associated with big government, are bad to the core. There is always tension between individual rights, states’ rights, and federal responsibilities. But on occasion federal responsibilities must take precedence. According to Thomas E. Ricks’s new book, First Principles: What America’s Founders Learned From the Greeks and Romans and How That Shaped Our Country, the framers of the Constitution used the term “promote the general welfare” dozens of times in the run up to their final draft which includes the phrase twice, including the opening sentence. This makes efforts to define and achieve the common good one of the foundations of our government.

Avoid the Tragedy of the Commons

Another concept, overlooked in our consideration of Covid-19, and a foundation of Western Civilization, is the principle of averting the tragedy of the commons. This means that individuals, acting in their own self interest, behave in a way that is contrary to the common good and to the benefit of society as a whole. In the case of a national pandemic, medical resources (hospital beds, professional staff members, ventilators, and medications) represent “the commons.”  Misuse of those resources through willful ignorance or wanton neglect represents the selfish over-use of the commons that has incited communities to anger and action throughout history. As I have written before, overburdened hospital systems will ration treatment and overburdened doctors and nurses will make medical mistakes. These will cause deaths in people that were otherwise not destined to die.

First, Do No Harm: Protect Yourself to Protect Others

Two medical concepts, familiar to healthcare professionals but less so in the general public, should also be introduced into our discussion of the current pandemic: 1. primum non nocere (first do no harm) and 2. the unpredictability of disease. The first is a principle that medical practitioners learn early in training and actively practice – the concept that a medical action must offer more benefit than harm. The second is a hard learned truth that no matter how much medical professionals learn about an illness, there is always the threat of unexpected consequences. I.e. when a disease spins out of control and, in the case of a pandemic, the otherwise young and healthy patient is killed or permanently disabled by a usually manageable and, ideally, avoidable infection.

With respect to primum non nocere, I, as a medical professional, do not want to give the disease to anyone else. The principle that I am living by is that I prefer to cooperate with enhanced mitigation than live with the guilt I would feel if I was the source of a cascade of infections, particularly if that cascade resulted in someone’s death. That means that I have to protect myself to protect others.

In my mind, my social responsibility to protect others is more important than my individual right to express myself. The challenge is to convince the minority, renegade, and mask-less  segment of the population to embrace that perspective of social responsibility. Because, if we all embraced primum non nocere, the spread would stop.

My social responsibility to protect others is more important than my individual right to express myself.

With respect to the unpredictability of disease, every medical professional has seen unpredictable complications from illness. Therefore, we must know that when we invite a tidal wave of illness by embracing disease-driven herd immunity we are inviting a torrent of complications. The trick  is to prove (and then convince a skeptical populace) that vaccine-driven immunity causes fewer deaths and complications than the disease itself.

Support of Our Economy and Mitigation of Disease are Not Irreconcilable

With a new team of leaders in pandemic management, with fresh concepts in mind about disease and personal responsibility, let us sacrifice for the general welfare. We should support our economy where it is safe to do so and mitigate where we must. This way we can turn the prospect of a dark winter into a brighter than predicted spring.

IMAGE: As of Nov. 9, 2020, Maine was elevated for the first time to a risk level (red) of active or imminent outbreak of COVID-19, according to CovidActNow.org.

CDC supports wearing masks to protect yourself as well as others (Nov. 10, 2020)

Houston, We Have a Problem: A Retired Physician Remembers Fatal Mistakes

View all posts by Sam Harrington →
Listen to Debbie’s 90-year-old Dad talk about the most extraordinary election of his lifetime
Alex Trebek’s Legacy: What Has It Taught Us?

7 Responses to COVID Management Catastrophe: the End of an Error