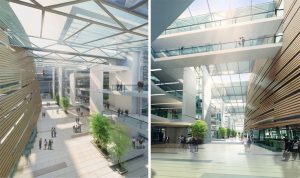 Example of a soaring hospital atrium

When I was a practicing physician, there was nothing more meaningful or rewarding than a middle-of-the-night emergency endoscopy, usually completed successfully (although occasionally not), when a patient’s esophagus was cleared of obstructing food or a bleeding ulcer was clipped and cauterized.

The tension of the scene would dissipate with the team’s collective sigh of relief at a job well done. And then, the computer work, the coding, the billing, the seemingly endless documention – not for the patient but for the system – would begin, deflating the sense of satisfaction at the exercise of medical expertise and coordinated team work.

Part of what I struggled with in the latter stages of my professional life was this dissonance between a one-on-one patient interaction, be it in the office or the endoscopy suite, and the subsequent interaction with the larger system that depersonalized and distorted that relationship. This included the creation of a medical record that focused on meeting the requirements of multiple layers of regulations and regulators: be they insurance companies (coding diagnoses, progress notes, or endoscopy reports – all designed to justify the care given and the supplies used); the federal government (Medicare and HIPPA compliance); the hospital administrators (the quality metric recorders, the patient satisfaction score keepers who report to the “Chief Experience Officer”); the medical staff reviewers; and the medical records department (where the coding of diagnoses was designed to maximize reimbursement) – none of whom were there when you and your team saved the patient’s life.

I was reminded of this disconnect when I picked up Elisabeth Rosenthal’s new book, An American Sickness: How Healthcare Became Big Business And How You Can Take It Back. It is a must-read chronicle of the commercialization of American medicine and how the health care industry has become nearly twenty percent of the GDP.

The author is a graduate of Harvard Medical School, was trained in internal medicine, and worked as an emergency room physician before becoming a reporter for the New York Times. I first encountered her via a popular Facebook group she managed, Paying Till It Hurts, which chronicled the massive cost excesses and inequalities of the American health care system. Recently, she has left the New York Times and is now editor-in-chief of the independent Kaiser Health News (no relationship to Kaiser Permanente or the Kaiser Hospitals).

The examples she gives in her book of pricing irregularities are mind-blowing. Her first example is of a commercially insured patient who receives Remicade infusions for psoriatic arthritis from Dr. A at $19,000 per quarterly infusion. When Dr. A moved her practice a few blocks away, to NYU’s Langone Medical Center, the cost of each infusion rose inexplicably to $140,000.

As an aside, I think that when I was still in practice, Medicare – whose reimbursements generally establish a functional baseline – would reimburse a facility in Washington about $4000 for such a treatment. This indicates both the extraordinary degree of cost inflation over the last few years and the nonsensical geographic variation between reimbursement levels, comparing Washington and New York.

Although not of my own doing, by virtue of my service on the board of my hospital and my work on its medical staff, I felt complicit in the process where people were paying into an insurance system that was not delivering commensurately better quality to patients as a result of this price inflation, but was instead filling the coffers of the medical-industrial complex that excessively reimbursed hospital administrators, insurance company executives, stockholders, and some unscrupulous doctors – simply because it could get way with it.

I wrestled with this perverse variance from common sense and ethical correctness not only in the realm of quality of care but also in the realms of patient safety and patient satisfaction – where excessive government and hospital regulations did not produce commensurately safer or happier patients.

Returning to the March of Progress

I recently returned to my former hospital, once a sleepy community hospital, to find some long-planned new building construction had been completed. The shining edifice, the soaring atrium lobby, and the state-of-the-art equipment were magnificent to behold as architectural tropes and technological advances. Yet something rang hollow.

I reflected on the fact that as a board member I had voted for this project. I had plowed the dirt with a gold painted spade at the ground breaking. I felt that to save Sibley, we had to grow and “compete.” Indeed, as a board, we did have to do that. That is how the system works. I had been caught up in the commercialization of medicine. Yet something was missing. The dissonance returned.

As I toured, I saw many old friends. I was met with friendly faces and shown the large patient rooms, the massive chemotherapy infusion center, the luxurious maternity suites, and the giant emergency department. Everyone pointed to the new surroundings with pride and awe.

We talked about the surgical census, infant deliveries, patient occupancy rates, debt, and depreciation. We looked at each other in appreciation for what we shared in our past and what they were still doing for the common good. And then almost every one of them said, “You got out just in time.” There was definitely a sense of having done too much – of being lost in a bigger system – of a complexity to the systematization of medicine that depersonalizes it too much.

The Aerial View Versus The Granular Interaction

This aerial view of medicine as a business shows us how and why health care now comprises twenty percent of our GDP. It is what makes us think in business terms such as market share and business recovery – a public relations term for making nice with (apologizing to!) a disgruntled or dissatisfied patient. It is the self-fulfilling momentum of growth for the sake of growth, duplication of services in the name of “competition” and “quality improvement,” and all the while charging progressively irrational and obscene amounts because we can. All this has proven to be impossible to stop. But it offers no emotional return to us, for it is at the granular level of interaction between patient and provider that medicine gives us the satisfaction that we crave.

Now, there is nothing more granular, more separate from “progress,” than the dying process. No system can save the patient who is actually dying – although Lord knows it has long been tried. And when we unleash the system on the elderly patient, someone who, based on age alone, is not likely to get long-term benefit, then we simply amplify the dissonance. No one benefits emotionally and yet the financial maw is fed.

The challenge is to recognize the dying patient and to free them from the system.

What to Read Next

For the aerial view of how to understand our health care system and how to change it, read An American Sickness: How Healthcare Became Big Business And How You Can Take It Back. For the satisfaction of saving someone from futile care, read my forthcoming book, At Peace: Choosing a Good Death After A Long Life.

View all posts by Sam Harrington →
How Sam’s book fits into the end-of-life discussion
Sam’s book on end-of-life decision-making to be published Feb. 6, 2018!

2 Responses to Dissonance: from middle-of-the-night emergency to an impersonal system