Proton Beam Radiation Therapy (PBRT) has burst onto the health care scene over the last decade. At cancer institutions across the country, PBRT facilities have been built at great expense. As data is collected and public awareness develops, PBRT has become the new cutting-edge treatment that cancer centers want to claim. In Washington D.C., a competition between two hospital centers is raging. A recent article in the Washingtonian details the controversy.

Loyal readers (you know who you are) will remember my blog post of July 17, 2013 when I wrote about PBRT in the context of a New York Times op-ed by H. Gilbert Welch, M.D. In that piece he asked the question, “At what point does it (the business of health care) become a crime?”

This post about PBRT vs. standard radiation therapy is written to emphasize and illustrate my point about Asymptotic Excess; namely, there is a limit to the benefits we can achieve but there is no limit to the money we are spending for improvements in healthcare.

It is a long post but I promise I will get to the point. I will start by restating the basic principles of radiation therapy. Standard radiation involves an entrance beam, a target of tissue (the cancer) and an exit beam. Normal tissue in the line of fire is damaged by the entrance and exit beams, depending on the radio-sensitivity of each involved organ.

Tissue damage and other results of standard radiation

Nerve tissue is radio-resistant so spinal cord tumors require high-dose treatment. Bone marrow is radio-sensitive which means that the blood-producing cells in the bony vertebral column can be damaged and lead to leukemia when spinal cord tumors are irradiated.

Pelvic tissue is more sensitive than pelvic and prostate cancers. This means that surgery in the pelvic area for benign diseases (diverticulitis, appendicitis) is more difficult if your pelvis has been previously radiated. Patients radiated to the chest for lymphomas and breast cancers can suffer complications such as premature or worsened coronary artery disease.

To minimize the collateral tissue damage, great progress has been made with computerized imaging, mapping and focusing of radiation beams. CyberKnife technology takes this to the next step and divides the treatments into multiple smaller beams focused on the target tissue from many different directions.

The concept is that no single beam will compromise the surrounding tissue but that the sum of the multiple beams at the target focus will be enough to kill the cancer cells.

So what is the advantage of PBRT? Suffice it to say that the practical benefit of PBRT is that the entrance beam is small and the exit beam is nonexistent. I cannot explain the nuclear physics of PBRT. More info here.

Historically, radiation has not been a cure

Let me put the benefits of radiation into context. Historically, radiation therapy has been a palliative or adjunctive therapy but not a curative therapy.

Palliative treatment means that the majority of patients are treated for complications of a cancer that is past all possibility of cure. Exquisitely focused and “non-damaging” beams of radiation (such as PBRT would provide) are not needed because the patient is destined to die before radiation’s complications can set in. Lung cancer with painful bony metastases or un-resectable brain cancers are two examples. The pain of bony metastases is suppressed. The swelling from brain cancer is reduced. But the life expectancy is unchanged.

Prostate cancer is the most common cancer treated for a cure by radiation alone. However, keep in mind that the definition of a cancer “cure” is achieved when the patient has survived 5 years, even if the cancer continues to exist in the patient and ultimately causes the patient’s demise. Prostate cancer does have a significant recurrence rate after radiation therapy and therefore it is generally not recommended to the younger subset of patients.

Radiation complications can show up years after the radiation therapy was performed. I regularly saw radiation proctitis (red, raw, ulcerated rectums) in men years, and occasionally decades, after their treatment. Some were crippled by their symptoms.

The point is two-fold. First, most of these men had been treated before current computerized imaging techniques and cyberknife technology. Second, and more importantly, radiation changes can take a long time to become manifest, complicating the collection of data regarding cures and complications.

My take on the PBRT race in Washington

In 2010, as Johns Hopkins expanded its market base in the Mid-Atlantic states to include Washington, D.C., the University of Maryland cancer program was obtaining a Certificate of Need (CON) for PBRT in Baltimore. Recognizing that the Hopkins “brand” would be diminished by the acquisition of PBRT by a lesser-known competitor, the Hopkins administration determined that putting their own such facility on the campus of an affiliate in Northwest Washington (Sibley Hospital) would suit their face-saving purposes, maintain their rankings in U.S. News & World Report and contribute to the financial stability of their Washington market.

Paying little more than lip service to the principle of coordinating care, Hopkins invited Georgetown’s Lombardi Cancer Center to have a minority position in the investment. Georgetown’s parent organization, MedStar, immediately filed for its own CON.  The result has been a competitive, antagonistic, name-calling race for approval through the archaic councils of the District government.

The larger point here is that PBRT is theoretically excellent for children (in whom a “cure” could result in longer, complication free, existence) and for tumors in or near the central nervous system (where the delicate tissue around the resistant cancers would be comparatively spared). For other cancers the benefits are yet to be proven and it could be decades before all the essential data is collected.

Why this is a “nuclear” arms race

This is a medical arms race among these “not-for-profit” institutions and their for-profit investors. Each one of these facilities will cost more than $100 million to build and plenty of money to operate and maintain. The reimbursements will be set to cover these high costs. If there are not enough children with cancer to fill the treatment rooms, then more common cancers will need to be treated so that each institution will maintain the necessary cash flow.

We are now learning that prostate cancer is currently over-diagnosed and over-treated. How will the availability of single treatment PBRT affect that equation? Since most prostate radiation is underwritten by Medicare dollars, how can an over-utilized and underfunded system support the increasing use of PBRT?

My image of Asymptotic Excess 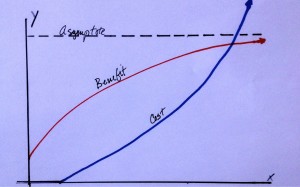 If you’re still with me, review in your mind the cost/benefit graph I drew for you (at left). I describe this image as Asymptotic Excess. If an appropriately small number of PBRT treatment centers are used to treat pediatric cancers and spinal cord cancers, the cost/benefit curves and coordinates will likely be plotted in the lower left part of the graph – i.e. where the benefit justifies the cost. However, if an excess number of PBRT centers are built and used for more mundane cancers, then the cost will far exceed the benefit and the cost coordinates will be above the dotted asymptote.

Think of your least favorite male politician. Imagine that politician is diagnosed with prostate cancer. How many of your tax dollars should be allocated to his care (and taken away from future infrastructure investment) so that this man can get single-treatment PBRT? My answer is “not many.” (Note: CyberKnife and other newer forms of radiation are still available to him.)

There are only two things slowing down Hopkins and MedStar in their nuclear arms race. One is the Elizabethan system of checks and balances in D.C. that precedes the issuance of a CON. The second will be the likelihood of future litigation.

As the country is further divided into large health care systems, consumers must recognize that “competition” among these giants is not about delivering more health care for less but is about maintaining their rankings in U.S. News & World Report and other PR score sheets.

We need to strengthen our Certificate of Need processes, mandate cooperation and coordination between giant systems, and outlaw “competition” based on media rankings.

View all posts by Sam Harrington →
My Nightmare: The Law of Diminishing Returns As Applied to Healthcare
Why Are Medical Executives Paid So Much?

5 Responses to An Example of Excess: Proton Beam Radiation Therapy