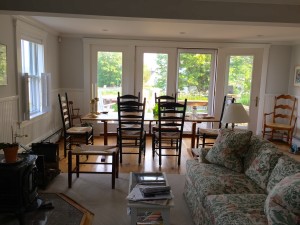 Something clicked into place a few weeks ago. It was a long time coming, considering I left Washington D.C. two years ago.

After a long winter of discontent*, we drove back to the coast of Maine in early May. About a month later, click. I realized, “I’m home.” 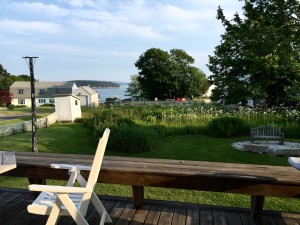 Our view of the Deer Island Thorofare

Maybe it was the first hint of color as our garden began to bloom after an endless winter. Or maybe the ever present glint of the Deer Island Thorofare and the archipelago of islands, known as Merchants Row, from our windows.

Or falling asleep every night to the steady honk of Mark Island Lighthouse. Or the briny, bait-scented smell of the Stonington Lobster Co-Op just down the road from us.

It might have been the excitement surrounding the (almost) completion of the addition to our century-old Opera House, a stunning lobby with floor to ceiling views of Stonington’s harbor. 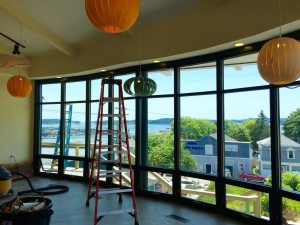 More likely, it was the fellowship of Opera House board members as we worked to prepare for our Annual Gala and Fundraiser in early July. Party planning is not my favorite thing. But napkin folding, seating charts, menu vetting and table set-up took on special significance with such a congenial group. (Thank you Mary Kay, John, Judy, and Ray.) 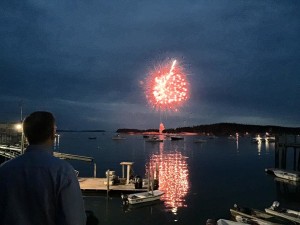 But really, it was none of these things. It was the sense of belonging and being part of something. The sense of being in just the right place at the right time. And, I’ll admit, the resonance of Sam feeling the “click” at exactly the same time.

After two years of (me?) wondering what’s “next” for him, I believe Sam has found his identity as a writer. He’s deep into the first revision of his book on end-of-life issues and decisions, tentatively titled, A Better Death.

I’ve noticed that I write about Sam more than he writes about me on this blog – an interesting phenomenon. As a friend put it on Facebook, talking about her husband, he is “the voice in her head.” I wonder if that is a female thing?

As much as I pride myself on being fiercely independent, how Sam is feeling affects me deeply. I spent much of 2014 worrying how he would make the transition from physician to … what? It felt like a burden I was carrying. Now that he’s made the transition, I am breathing a sigh of relief.

“Now is the winter of our discontent
Made glorious summer by this sun of York;”

Photos: all snapped with my iPhone 6 Plus. As good as any camera, I think.

View all posts by Debbie Weil →
Lobstering at 3:00 AM: Hard Work, Beauty, and Profit
Enjoy… or Improve the World? Sam Solves the E. B. White Conundrum