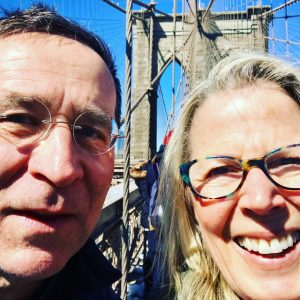 This stretch of months, this time, this moment right now is the happiest I’ve ever been. It’s taken five years to get here. I’ve crossed, separately, and together with Sam, some dark canyons since 2013.

We left D.C. five years ago with the intention of reinventing ourselves. Yes, for a final act. When you start your reinvention at age 61, you don’t have a whole lifetime ahead of you. You have a chapter left, maybe two. The pages are still turning on those chapters but I want to note a few highlights. 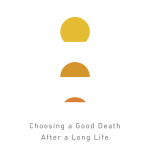 The most obvious achievement between the two of us is Sam’s book, At Peace: Choosing a Good Death After a Long Life, which was published Feb. 6, 2018 by Hachette / Grand Central Publishing. It is a wonderful book! Beautifully written, highly useful and important. Having published a book over a decade ago with a big-name New York publisher, I know what goes into writing a book. It ain’t easy.

For me, as I work on a new book about changing your life with a “grownup gap year,” it is shudderingly difficult. The writing of our books is one way Sam and I are so different. For Sam, there was no procrastination or spinning of wheels, at least that I could see. Over a period of three years, he got up early and went to a writing space either in Stonington or Brooklyn and… wrote and re-wrote.

In contrast, I am a gerbil who runs endlessly and often with angst when it comes to writing. And this despite the fact that I am ostensibly the writer and the editor.*

*In fact, I may be a better editor than a writer. That’s for another time.

But that’s ok. Well, almost ok. It’s always better not to procrastinate in the name of elusive perfection. Getting to know yourself and accept yourself is part of what happiness is. And going one step further, learning how to love – and not loathe – yourself is a big part of it.

Do you secretly loathe yourself?

Not everyone does, of course. But a surprising number of “successful” people quietly, secretly loathe themselves. Author and lifestyle guru Tim Ferriss talked about this recently in a remarkable podcast interview. Loathing yourself is not a good thing. It leads to depression and even, for some, suicide. Tim talked about how he came to the realization, on a meditation retreat, that he had loathed himself since he could remember, despite his extraordinary success as a bestselling author, podcaster, investor and more. I was riveted, listening to the interview.

The goal was more than happiness, of course

Of course, the goal of leaving D.C. to reinvent ourselves was not to chase happiness. I’m pretty sure Sam was perfectly happy in D.C. He practiced medicine for 31 years, taking care of thousands of patients. To his delight, he is now seeing a number of them on his book tour.

As for me, I did some wonderful things in D.C., although I didn’t save any lives. Unless you consider business blogging a lifesaver. Much of what I did revolved around D.C.’s burgeoning tech community. It was awfully fun after the publication of my book to get speaking requests on the topic of corporate social media for exotic places like Antwerp, Dubai and Sydney as well as London and Paris.

But after the excitement died down in 2011 (five years after my book was published), I wanted a new adventure. Something different and unexpected. In retrospect, I realize I also wanted to outrun the depression which has plagued me periodically since I was a young adult.  I wanted some “thing” and some “place” where I would find clarity and contentment. (Watch my four-minute video here, if that topic is of any interest.) Ultimately, that strong desire inspired and propelled both of us to leave our comfortable life in D.C.

Then, unexpectedly, depression came rushing back. I wrote about it here. Thinking that I could leave depression behind when I left D.C. was naive. Suffice it to say that I’m learning how, in this moment and in this new time, to keep it at bay.  That’s a big part of my (and our) reinvention. I’ll leave it at that because depression is a fraught topic.

Five years is enough time to look back and ask some important questions:

Why did we do what we did? Very few, if any, of our friends have followed suit. It’s not just about money. Almost anyone can figure out how to downsize.

Were we brave – or was I just desperate? It’s an interesting question.

What were the decision-making steps?

How do you reinvent yourselves as a couple when you are quite different individuals?

What do you give up, and what do you gain by leaving the community you’ve lived in for three decades?

What happens when working for pay is no longer your primary goal? (I hate the word retirement.)

How do you contribute and make a difference in a new community, which, after all, is what leads to happiness? (In Stonington, I’ve created, produced and directed a multi-generational women’s storytelling event at the Opera House.)

Oh, and how do you learn to love yourself, especially when you have a lively, opinionated and sometimes fractious family? Ahh, the answer to this one is complicated. I do love my amazing 87-year-old parents and my three siblings, even when we fight.

I’ve got a bunch of answers percolating. Stay tuned.

From Stomach Doctor to First-Time Author: Sam’s behind-the-scenes article on how he wrote AT PEACE.

Halfway Through Life: What Really Matters?:  Jonathan Fields‘ podcast interview with Tim Ferriss on spiraling into a bad place on a meditation retreat and what he chose to do about it. (Nov. 27, 2017)

One Response to Getting to Your Happy Place: How Long Does It Take?