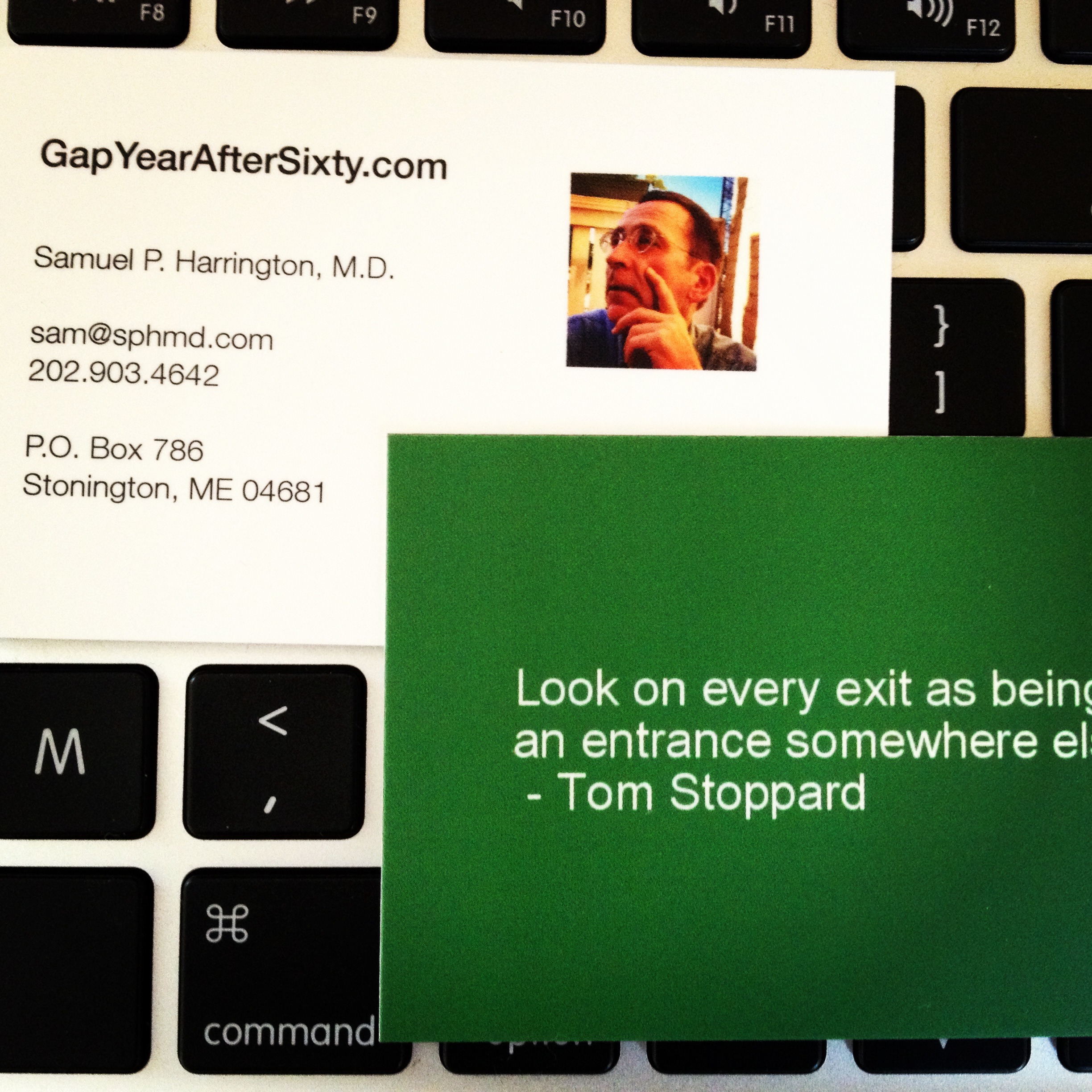 The first month of my Gap Year is over. Eleven months to go. I have had two business discussions about potential future endeavors but remain committed to holding off on serious talks until I have really separated from my practice by several months.

Over the weekend a patient called. She is one of the few who have my cell phone number. I instantly went back into the “Doctor” mode for a few minutes of advice. It was not comforting or comfortable. It just was.

We (Debbie and I) remain in limbo as the “transition” of the first month bleeds into the second. We have decamped to our cottage in Maine but because of construction delays we cannot completely unpack and settle in.

We are living in transit among boxes, suitcases and unhung art. This blocks the flow of progress. I cannot redefine myself if I have to devote my limited brainpower to organizing rooms.

We are also preparing for the World Domination Summit (WDS). I have my new business cards. This is a break from my past. The old cards were black on white with name, number, subspecialty and “By Appointment.”

Now they are in color, with a photo (avatar head shot), blog site, email address and motivational (or demotivational) quotes on the obverse.

My family will recognize most of them. For example: “Always be sincere, whether you mean it or not” – Michael Flanders. And “Neither man nor woman can be worth anything until they have discovered that they are fools” – Lord Melbourne.

And particularly apt, “Look on every exit as being an entrance somewhere else” – Tom Stoppard.

Of course my family will not be anywhere near me when I am passing them out and pretending to be a new age thinker.

Debbie was selected to do a two-minute, main stage presentation on Gap Year after Sixty. We are writing the talk together. She has done short talks before, for Ignite DC, and is a good choice.

This is our second collaboration. It is going well. The first collaboration is to allow Debbie to edit my rants. She is a good editor but is completely inflexible on certain punctuation issues. [Ha! – Debbie]

For example, why not end a sentence with the period outside of the quotation marks? It is good enough for the Brits and it is promoted by the space bar function on the old Blackberry. On my current iPhone a double tap on the space bar inserts a period before the next sentence.

This function also promotes my old habit, on a typewriter or full keyboard, of using two spaces between a period and the start of a new sentence. Where did I learn this? Debbie insists it should only be one. I cannot easily break this habit but it is killing her to eliminate the space between sentences as she edits. Who will crack first?

On to WDS, where I will try on a new persona as a travel-hacking, self-redefining, old age pensioner-blogger.

More medical rants with my next posts. They are therapeutic.

View all posts by Sam Harrington →
For now, you can call me Plain Mr. Harrington (S.)
Q. & A. with Debbie and Sam on “collaboration”

4 Responses to Heading to the World Domination Summit… as a travel-hacking, old-age blogger