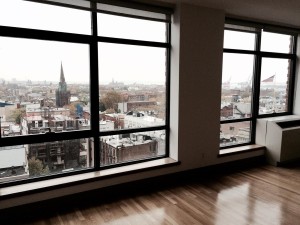 One day after we moved out of our sublet, we stumbled onto the perfect apartment near our daughter and son-in-law in Brooklyn Heights. It’s a tiny 1 BR (yes, everything in Brooklyn is tiny) on the 10th floor of a building with a view south to the Verrazano-Narrows Bridge. I fell in love with it and I decided, on the spot, that we should sign up for a one-year lease.

If you’re reading closely, you’ll note that I said “I decided” and not “We decided.” Sam is still speaking to me, barely. But he is thoroughly annoyed that I made such an impulsive decision before he was completely on board with it.

He has a very good point. I feel badly for running roughshod over his slower and more thoughtful decision-making. I shouldn’t have done that. But I did. The one-year lease is now signed. That means we’ll be spending part of our time over the coming year in Brooklyn, a place that spoke to me in a very deep way during our recent month-long sojourn.

And as loyal readers know, a place that also got under Sam’s skin.

We are NOT moving to Brooklyn

Don’t misunderstand. Brooklyn and New York are too noisy and crowded and frenetic compared to Deer Isle, ME.  Sam and I agree on that. So we are not “moving” to Brooklyn. We are continuing, very happily, to put down roots in Stonington and Deer Isle, Maine as our new permanent residence.

But having this apartment means we’ll be able to visit as much as possible with our three young granddaughters, we can go deeper into the maze of Manhattan’s museums and theatres, and I can expand my book coaching business with more F2F events like the SoHo Writing Workshop I did last month. With our own apartment as a base, we can explore the idea of Brooklyn as a second home. To emphasize, it’s a one-year rental.

We did finally sell our house in D.C., in case we didn’t update you on that. Now, after 32 years, we have no official connection to Washington. I am slowly digesting that. It’s both sad and liberating. We are both in the process of getting Maine Driver’s Licenses.

(More about that in another post. Applying for a license in Maine is a high-touch, weeks-long process. Rather than the impersonal, but more convenient, get-it-in-an-hour method of D.C.’s DMV.)

And, perhaps prematurely for Sam’s taste, we are investing in an urban pied-à-terre. That is something we talked about before embarking on our official Gap Year in 2013. And an idea that we have returned to frequently. The timing is a bit precipitous, I admit. I’m a little nervous about it. It means moving furniture down to New York in the next few weeks along with a bunch of other logistics.

My rashness and Sam’s deliberateness are the yang and yin of our relationship. That’s both a good thing and a continuing challenge to be confronted and negotiated. I am quite sure that if we didn’t possess that combination as a couple we would not have embarked on a Gap Year After Sixty.

So, onward to more Extended Gap Year adventures and to pushing yourself outside your comfort zone.