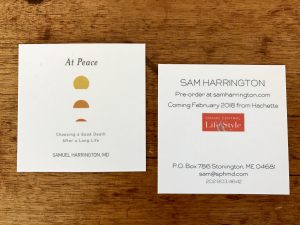 As I wait for the publication date (Feb. 6, 2018) to arrive, my mind is playing tricks on me. I wake up at night, asking myself if I have made one of several central points in my book. In the morning, I remember I have. Other books on end-of-life issues are popping up or recently published. Does the world need mine?

In April of 2017, the Economist and the Kaiser Family Foundation published: “What people most want in their final months.”

The article, based on a survey, compares answers to probing questions from four countries: Brazil, Italy, Japan, and the U.S. Brazil has the youngest and most Catholic demographic. Italy is less so on both counts. Japan has the oldest and most agnostic – yet still spiritual – demographic. And the U.S. is the most heterogeneous.

As one might expect, there are significant differences in the responses that have grown out of these cultural differences. For example, in Japan, only 13% of people said that religion plays a major role in their thinking about end-of-life care (the U.S. figure is 50%) but 76% of Americans and Japanese feel that spiritual peace is very important for the dying.

Let me focus on the responses of the U.S. population because those results are more pertinent to my book.

When faced with ranking seven questions as extremely important, very important, somewhat important, or not important, 87 percent of Americans ranked “not burdening their family financially” as extremely or very important. This was the most highly ranked of the values researched. In descending order, the other values were recorded as: make sure end-of-life wishes are followed (85%); having loved ones around (81%); being comfortable (78%); family not burdened by decisions (77%); being at peace spiritually (76%); and, living as long as possible (46%).

Although this study did not ask about the importance of “being in control,” that is the attribute of a good death that is most important in other studies I have seen. For “control” to be challenged by the rise of “not being a burden” (either emotionally or financially) from the middle ranks of other studies to the top ranks of this study is important to note. It must say something about Americans’ appreciation of the costs of medical care and the emotional drain of poor planning and communication.

51% of Americans over age 65 have a living will, but only 22% have had an end-of-life discussion with their physician and 92% would be willing to have that discussion.

My take-aways? I think that if a patient wants to die at home they should have the expectation that (finances permitting) they can make this come to pass. Hurray – my book explains how to make this happen.

I think that physicians need to do a better job introducing “The Conversation” into their medical practices. Alternatively, patients can take the initiative and introduce the topic themselves. Again, this is where my book comes in.

If 71% think we should prioritize comfort and 41% think the current system does not do enough in that regard, we have some work to do educating physicians and patients about the appropriate use of hospice care.

If 19% think we should prioritize extending life (my assumption is that this figure is comprised of people expressing an opinion based largely on religious beliefs) but 33% think we are not doing enough to extend life, the 14% difference must represent some intellectual difference. I suspect it represents patients, family, and physicians who are outside of the core 19% but do not recognize when appropriate treatments for extending life become futile or inappropriate – an example of this would be maintaining a brain dead patient with mechanical ventilation and artificial nutrition beyond the limits of generally accepted health care standards.

My book squarely addresses the issue of extending life – or not. For example, maintaining comatose patients will include cruel treatments (suctioning the lungs or changing tubes and catheters, for example) and cruel complications (bedsores and contracted limbs) without any personal benefit in terms of improved quality of life or human interaction.

My book explains how the American health care system fails the chronically sick elderly patients. It educates the reader about the diseases that plague the elderly. It promotes communication between doctors, patients, family members, and caregivers to discuss prognosis, performance status, disease trajectory and end-of-life wishes that will best offer patients control, comfort, and closure.

These are big complicated issues. My book offers a practical approach to dealing with them.

Click here to order from Amazon. Or go to his site at samharrington.com.

View all posts by Sam Harrington →
You can pre-order Sam’s book!
Dissonance: from middle-of-the-night emergency to an impersonal system