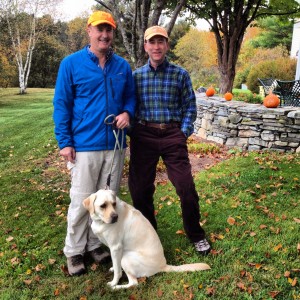 I now have a hunting license. Let me explain.

The prerequisite to obtaining a hunting license is a Firearms Hunter Safety Course. The courses are very popular in Maine and I had to drive an hour away to take mine.

After twelve hours of class time and six hours of home study, I passed the test. No surprise there. The instructors were so diligent about teaching to the test that the majority of the class scored 100 percent.

In one sense that diminishes the process. But the sheer number of hours involved and the devotion of the instructors was enough to drive home the main points of gun safety, hunting principles and survival skills.

I certainly took away some important lessons about hypothermia, topographical map interpretation and gun handling in the field. The time commitment alone would weed out a large number of people, but keep in mind that this course was for a hunting license and is not related to gun ownership itself.

Almost anyone can buy a gun. After that, the license relates to how you use it.

Why my sudden interest in hunting?

Well, my friend and college roommate is putting me up to it. He lives near Portland, ME where he owns nearly 200 acres of land with deer, rabbits, coyotes, turkeys and other game birds – ripe for the taking.

He has hired a Native American guide for the first weekend of deer season in early November. I am interested in seeing how the process unfolds and am also looking forward to spending some quality time with him.

More importantly, accepting my friend’s invitation is a Gap Year challenge to get me out of my comfort zone. I do not own a gun and have no intention of buying one.

As I reviewed the 50 students in my Firearms Hunter Safety class I became aware that most of them were male students from Maine Maritime Academy, which is based in Castine, ME. I presumed from that fact that they had some degree of discipline in their lives and they were seeking a hunting license for recreational purposes.

The two young men who spoke regularly with the instructors about getting “concealed carry” permits were both MMA students and sons of military or police parents.

Their interest in discussing this permit was slightly unsettling to me, as I do not think that permit process requires a hunting license and I know it requires a separate course of instruction.

I think they were trying to focus attention on themselves but I took some small comfort from knowing they came from apparently responsible families with firearms and policing in the background.

The women in the class were less easily explained, especially the mothers and their daughters. During the “field” exercises we stepped outside of the auditorium and onto the boulevard of the main street in Castine. There we paired up to unload and reload firearms before and after crossing simulated logs, fences or streams.

It was clear that most of the females had not carried guns for any distance. It was not clear why the pedestrians on the other side of the road were not unsettled as we paraded up and down with rifles in hand, “locking and loading.”

One young woman explained that she had fired guns at a rifle range but someone else had transported the weapon and handed it to her, loaded. I suspect that she was getting a license for purposes of social acceptance or possibly to get an extra deer tag for the family and its meat supply. I have learned, however, that “tagging” a deer that someone else has shot is explicitly forbidden, even within a family.

A few words about the gun culture in Maine

Although ambivalent, I am easing into the gun culture. Here it is part of the local fabric of life. Perhaps this is the explanation for non-plussed acceptance of our field exercises by the local matrons.

Guns really are important to the community of locals and year-rounders who use them for hunting, food supply and varmint control. Without animal control officers in these small towns varmints are a measurable problem. Uncontrolled beaver populations can flood roads and isolate communities, for example.

I have never shot anything big.

I have shot skeet and done target practice on several occasions. But I have not shot at any living thing since I was a child and aimed my grandfather’s 22-caliber rifle at a harmless woodpecker. It never occurred to me that I could hit it.

I thought I did hit it, way back then, but I never found the body and the memory of this unfortunate act and the unresolved result remains with me. 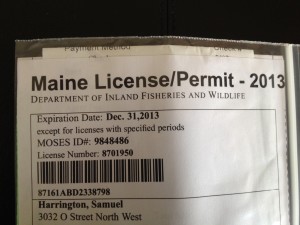 Shooting a deer will be another matter entirely. Although they are an appealing species they are in a state of overpopulation. They are pests and they have salvageable (donatable) meat.

I think I can do it but I do not think I am likely to get a chance. I will let my friend tag out before I take a shot. The likelihood of us taking two deer in three days seems remote. But if I like the process I can try again next year.

In the next few weeks I will have to sight-in the rifle I borrow and do some target practice. One of the primary lessons of the course was that only a clean-kill shot is responsible and worth taking and only practice will lead to that event.

So today, with Safety course certificate in hand, I walked down to Stonington’s town hall to buy my hunting license. I could have purchased it at a number of other locations. Licenses are available at many local convenience stores, most gun shops and turnpike service centers.

Get your license on the go. Go figure.

On urban liberals and rural conservatives

A recent New York Times article about some conservative counties in Colorado threatening to secede and form the 51st state highlights the divide between urban liberals and rural conservatives.

Although our Maine township is not as socially conservative as the rural west (the majority of locals accept same-sex marriage and universal background checks for gun purchases), there is the urban rural divide here in Maine as well.

This is exemplified by the divide between Portland, ME and “everywhere else.”

Rural Maine views Portland as a suburb of Boston. Portlanders have too much money, power, and liberal influence over the legislature in the state capital of Augusta. They view Washington DC as completely out of touch. Fortunately those politicians are far away.

So think of me, dear reader, when I am sitting in a blind or stalking deer with my college roommate. I will not present a great danger to the white-tailed deer species. I will be learning something more about my new neighbors and myself.

More later after my weekend of hunting and male bonding.

View all posts by Sam Harrington →
Josephine: Welcome to Our New Grandbaby!
Toughening Up With a T-Shirt in Cold Weather

4 Responses to I Got My First Hunting License