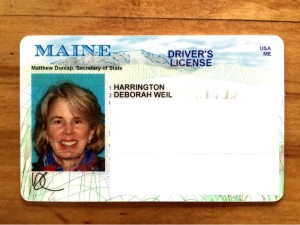 I am not good at embracing uncertainty. Nor am I good with transitions despite the tagline of this blog. As we drove away from Washington D.C. in June 2014, having packed up our house, I wept. Sam peered at me in confusion. “Why are you crying?” he asked. “Weren’t you the one who decided we should clear out the house to get it ready for sale?” Yes, I responded. But this means we’re leaving the city where our children grew up and where we have lived one half of our lives.

What happened next was surprising. Despite D.C.’s supposedly hot real estate market it took several months longer than we expected to sell. This made for a painfully extended goodbye. But as soon as the sale was complete (i.e. the proceeds had been wired to our bank), I felt unexpectedly liberated. The sadness evaporated. We had traded a wonderful house for money in the bank which meant security and more options.

Now we could make it official. We’ve been living in Stonington, on the coast of Maine, since June 2013, the beginning of our Gap Year. Now we could become legal residents of Maine.

What makes you a legal resident of a state?

Exactly what makes you a legal resident varies from state to state. It’s usually pretty straightforward: you are a resident of a state if you are paying income tax and voting in that state. But there are a few wrinkles. The FAQ on the state of Maine website includes the perfectly phrased question: “How do I know if I am a resident of the state of Maine?” I might answer that it’s a state of mind, particularly if you are living in remote midcoast Maine where the nearest Starbucks is two hours away but you don’t really care because it’s beautiful and quiet where you are on Deer Isle.

But the official answer is more straightforward. You are a resident of Maine if you are domiciled there in your permanent home for more than 183 days a year. That requires you to pay Maine income tax.

And if I understand the tautology of the law correctly (see P.S. below if you are a lawyer and you are reading this), paying income tax makes you a resident.

Most readers know that we will be spending time in Brooklyn this year. But not too much time. You have to be super careful to count your days of residency in the state of New York. Overstay your allotted 184 days and you are considered a resident and required to pay New York’s hefty income tax.

The charm of getting a Maine driver’s license

I don’t know if this is legally correct but I decided that getting a Maine driver’s license would make me a more official resident. That’s where the charm of Maine comes in. I drove one hour to Ellsworth, the nearest small city, and went to the BMV. At first I thought they’d mixed up the initials. Having spent 31 years in D.C., I thought DMV was shorthand for “the place you get your driver’s license.” Turns out that in Maine the “department” of motor vehicles has been downgraded to a “bureau.”

I took a number and sat briefly till I was called. A very friendly BMV employee asked me a few questions. I had correctly brought along my D.C. license, a utility bill with my name and local address on it, and my passport. All was in order and soon we headed around back for the eye exam and a photo.

OOPS. I experienced a moment of panic. The last time I renewed my license in D.C. I had forgotten about my laser eye surgery. My right eye sees 20/20 (or close to that). The left one has been surgically “corrected” so that it only sees close up. The total effect is called monovision. Very useful if you don’t want reading glasses hanging around your neck all the time.

Anyway, when I approached the desk in D.C. and leaned into the eye exam machine, things didn’t go very well. “Read from left to right and tell me what you see,” the D.C. lady barked. “Well, the left box is blank. The middle and right boxes read Q, E, V… ”

The left box was NOT blank. I just couldn’t read any of the letters because that eye is so near-sighted.

Needless to say, I was sent packing from the DMV, tail between my legs, to get an “official” letter from my opthalmologist saying this peculiar situation was OK. I was to return another day to renew my license. Dang it.

So, as the nice BMV lady was chatting away, I surreptitiously pulled out a pair of distance glasses that I keep in the glove compartment. She looked at me funny, clearly thinking: “I thought you said you didn’t need glasses for driving – ?”

“Oh, you don’t need those,” she said cheerfully. But… I tried to explain the problem. “Don’t worry,” she said brightly. “Just try it. If it doesn’t work, you can put on your glasses.”

So I leaned in. The left box was “blank,” the middle and right-hand boxes had recognizable letters in them. I could feel my cheeks burning with embarrassment. “You did just fine!” she exclaimed, adding “You only need one eye to drive in the state of Maine.”

It’s official. This is my kind of state.

P.S. If you are an attorney and you are reading this…

You know who you are: son, son-in-law, father, etc. I am, frankly, a bit confused by the difference between a residency “requirement” for a particular state and what makes you “eligible” to be a resident. Feel free to correct my legal interpretations above.

5 Responses to Goodbye D.C., Hello Maine: the Charm of a New Driver’s License