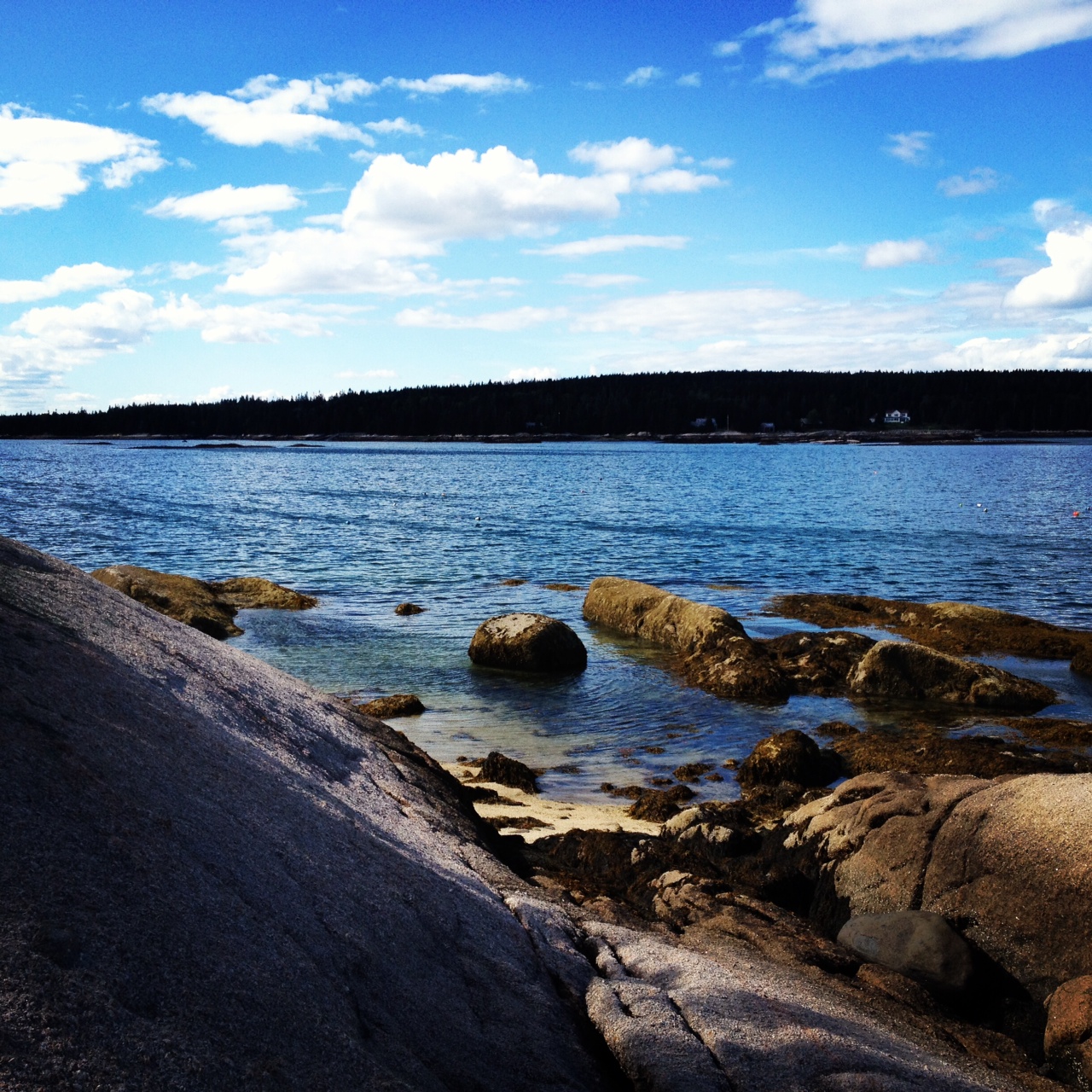 One of the surprising things so far about our Gap Year is what I’m learning about Sam, my husband of 40 years. The most surprising thing, of course, is that there are surprises.

I knew he was a good writer, for example. But I didn’t realize how good until I started editing his posts. He writes with a lovely cadence (short sentences mixed with long), provocative phrases, precise descriptions.

What he says about my family’s island is so spot on that I can’t improve upon it. I’ll repeat so you can enjoy:

An island evokes a kaleidoscope of feelings that is so reproducible from year to year that it acts on the brain like a hard reset on the computer. There are feelings of isolation, power, exceptional independence, safety, danger, vulnerability, and (curiously) a primitive eroticism. >> More.

But I do want to add a few words. I won’t name the island because the privacy and isolation are what my siblings and I cherish the most. My father, with amazing foresight, bought the property in the late 1960s when he and my mother were cruising Maine’s Penobscot Bay. Family lore has it that he moored his sailboat in Stonington’s protected harbor on a foggy day. Then he rowed into the town dock and walked around the, then, largely undiscovered fishing village.

There wasn’t much going on in those days other than fishing (meaning lobstering). But there were several real estate offices along the main street. He wandered into one, sat down and inquired as to whether any of the dozens of small islands in the Deer Island Thorofare were for sale.

There was one, quite small and conveniently located a ten-minute boat ride from town. The price was low. So he bought it. Then he rowed back out to their boat and told my mother. Ha!

July and August are the golden months on the island

Of course there is a lot more to it than that. I must check the details with my dad. It seems there was some dispute over title to the island and it took several years to clear up. Not until the early 70s was ownership firmly established. It was then that my parents built the cabins. They are simple but “modern” in design with sloping roofs and lots of windows. Forty years later they are still in remarkably good repair.

About a decade ago, my dad gave the island to his four children so we could manage repairs and maintenance, pay taxes, etc. I won’t get into the family drama of how we decide who will use the island when during the summer. Suffice it to say that July and August are the golden months and we squabble – despite having a clearly organized rotation of who gets to pick which week first. 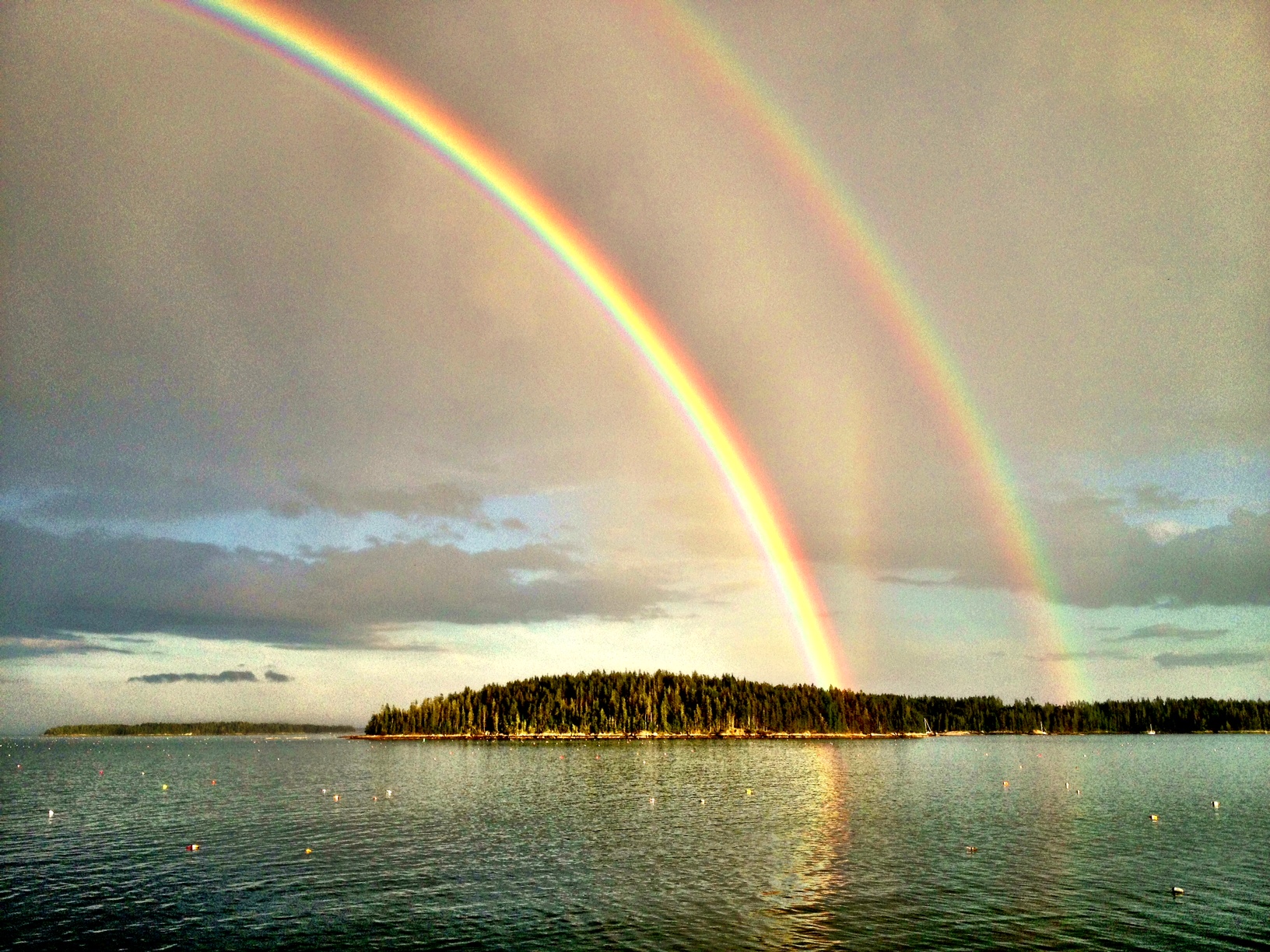 I was #1 this year. So I called primetime, a stretch that included the first weekend in August. Some old friends joined us.

As is usual on the island, we had every kind of weather from rain and fog to blue skies and hot sun. A double rainbow one evening was stunning but not without precedent.

On the island you don’t think, you feel

As for my reflection on our island, it comes down to this: my scurrying, worrying brain goes into hibernation. I don’t think. I feel. At high tide I drink in the sight of the perfect clear water lapping on the rocks.

We live by the 10-foot tides. High and low are separated by six hours. They occur four times every 24 hours. Low tide is good for collecting mussels. One year (a long time ago) we were awash in starfish. They clung to the rocks so you could only reach them at low tide. My mother paid each grandchild a quarter per starfish. I can still see them, pink and prickly, piled up on the granite blocks.

Mostly, we wait for high tide 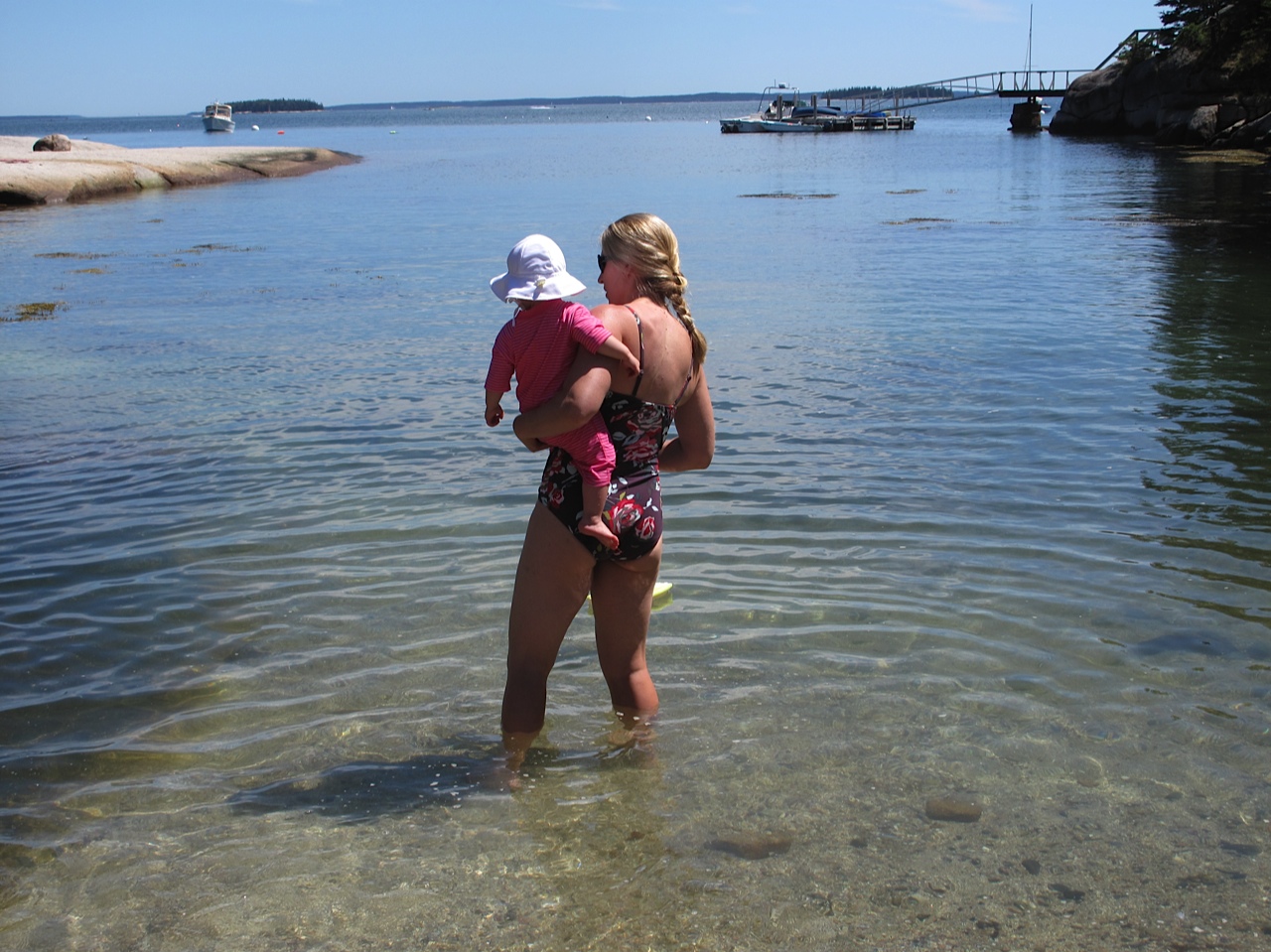 Mostly, on hot sunny days, we wait for high tide to fill the little cove so that it’s perfect – despite the frigid temperature of the water – for swimming and sunning on the flat rocks. The pure, physical beauty of the island with its pink and gray granite rocks, evergreen trees and mossy paths is a tonic and, as Sam puts it, a reboot.

I can never get enough of it.

View all posts by Debbie Weil →
Life on an island: an annual hard reset
Gap Year metrics: how to fit it all in