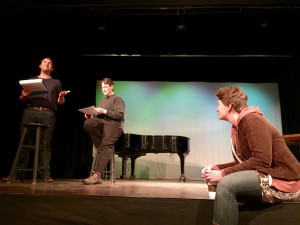 Sam and I are both in a play reading this week at Stonington’s Opera House. That may not sound like much, but it’s the first time we’ve appeared on stage together. Opening night happened to fall on Feb. 3rd, our anniversary.

Love and Information is a quirky, challenging play by brilliant British playwright Caryl Churchill. Rather comfortingly, Churchill is at the top of her game in her 80s. Her newest play, Escaped Alone, is currently running in London. The one we’re in is made up of 57 mini scenes, played by 17 actors. It’s directed by Meg Taintor, the new producing artistic director of the Opera House.

Sam and I play opposite each other in a scene called “Ex,” about a man and a woman reliving their long-ago love affair in two minutes. We talk about sex, including the time we made love on a friend’s kitchen table while soup was on the stove. To remind: this is in the play. Except the scene is more complicated than that.

In fact the whole play is more complicated. The playwright dissects “love” (meaning communication, the desire to be heard, the yearning to be understood) and “information” (digital overload, our DNA, memory, knowledge) in a dizzying kalaidoscope of snippets.

Somehow it works. Churchill’s specialty is “unfinished” or incomplete scenes, where the scene starts in mid-sentence and the audience is left hanging at the end with words unsaid.

Because the play farcically mimics real life, Sam and I are finding it curiously rewarding. So much is not said between a couple. Or said but misheard. And Sam and I have been working on that a lot lately. At least for the moment – and as part of reinvention – we are finding ourselves re-invigorated to avoid miscommunication.

So there was a delicious irony in performing together on our 43rd anniversary.

Here is a sampling of our Churchillian dialogue on a recent low-tide walk to Sheephead Island. You decide who is saying which lines. That’s the way Caryl Churchill writes. Either actor can start. And depending on who does, it changes the meaning of the scene.

Where did you go?

I couldn’t see you.

I left the beach and cut through the woods.

You chose the wrong spot.

It worked for me.

John Steed, left, and Mary Bernier perform “Virtual,” a scene in Love and Information where John’s character is in love with a woman in a computer game and Mary’s character is trying to tell him that “SHE is NOT real.” He doesn’t believe her… Meg Taintor directs.

Photo snapped with my iPhone.

View all posts by Debbie Weil →
Reflections on Dirty Snow and Political Hyberbole
On Public Speaking, Writing, and Why You Should Ban the Word “Struggle”

2 Responses to Love and Miscommunication: Appearing Together in a Caryl Churchill Play