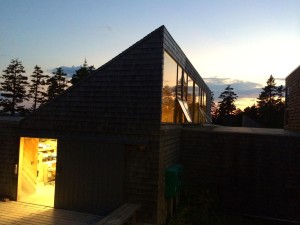 I’ve let a whole month pass without writing about the poetry workshop I took the last week of August. It was, coincidentally, the last week of our 15-month Gap Year. A lovely way to end the summer and to end our “official” gap. Although, as I have noted, the “gap” between our old life and our new one continues to widen.  I am not anywhere near figuring it out.

Back to poetry. The workshop was at Haystack Mountain School of Crafts, about 20 minutes from where we are living in Stonington. It’s not a mountain but rather a 40-acre campus of spruce trees and woods and granite ledges and a cascading series of wooden buildings designed by architect Edward Larrabee Barnes to fit seamlessly into the setting. 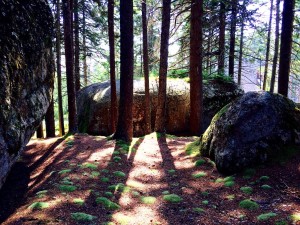 I’ve known about Haystack for years but this was the first course I enrolled in. It was not in glassblowing or ceramics or blacksmithing or fiber art – what Haystack is internationally recognized for – but in Earth Verse, described as “a workshop in writing under the spell of place.” Specifically, the landscape of Haystack. Perfect, I thought, when I hurriedly applied in February before leaving for Africa. 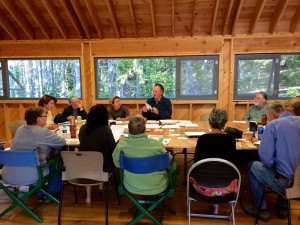 I was thrilled to be accepted. I’ve never considered myself a “poet.” It sounds rather lofty even if you do a lot of writing. Several in our group didn’t even consider themselves “writers.” But thirteen of us showed up around the table to be guided by Pacific Northwest poet and essayist Kim Stafford, an extraordinary teacher. Following Kim’s gentle prompts, we began writing. This consisted of free writing in our journals (“Shall we write?” Kim would ask quietly) along with specific exercises and assignments. No rhyming required. Within a few days, each of us felt we could rightfully claim the title of poet. 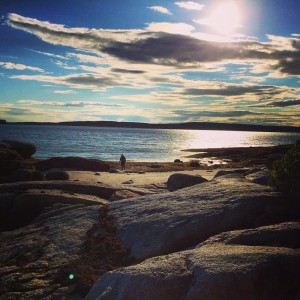 Author, journalist and writing teacher William Zinsser famously said that writing is a craft, not an art. He also said a lot of other hard-nosed things about writing. I live and work by many of them.

For example: “Writing is hard work. A clear sentence is no accident. Very few sentences come out right the first time, or even the third time. Remember this in moments of despair. If you find that writing is hard, it’s because it is hard. It’s one of the hardest things that people do.” – from On Writing Well: the Classic Guide to Writing Nonfiction.

Kim Stafford made it a whole lot more fun. He read to us in Chaucerian Middle English, he told stories about teaching writing in Bhutan and Alaska, he quoted from his own poems and recited from memory dozens of poems by his father, the famous poet William Stafford. With Haystack as a stunning backdrop and in the warmth of the last days of summer, we wrote and wrote and wrote and there was an ease to it that made the workshop exhilarating.

Here are a handful of Kim’s writing prompts that I loved and continue to experiment with:

There is so much more that I could say but I’ll stop here. Otherwise I’ll never publish this.

With special thanks to my fellow workshop participants, David, Mary, Anne-Claude, Leslie, Liora, Emily, Julia, Barbara, Scott, Kristine, Lynn, Holly – and especially, Kim – here are two of the poems I wrote at Haystack:

On Becoming a Poet

Start with a granite ledge,
an elephant humped on the shore,
and count the crevices
deep and full of possibility
or maybe briny water at high tide.

and now add granite boulders
lots of them
nestling and jostling
or standing alone
or maybe invisible at high tide.

and don’t forget the seaweed
splayed on your boulders
so green and glossy, rubbery
with pods you can pop,

and don’t forget the seagulls
wheeling and bleating above your head
their cries so ordinary and so important.

Be the noticer, the collector, the lover.
That’s all.

I’m not at my writing station in the woods
seated on a mossy granite rock
gazing at the rippling tide of Jericho Bay
for inspiration
as our instructor bade us do.

No, I am inside my head
where the crevices are very deep
and the lichen is encrusted on the walls.
If there is moss, it is on a path
from one thought to another.

Sunlight pierces, on a good day,
to the depths of these fissures
and stirs old memories
into dazzling shards
I can share with you.

Photo credits: all taken with my iPhone 5.

View all posts by Debbie Weil →
Unethical Doctors and the Business of Medicine
First Day in Brooklyn… Oh My (Meet Libby!)