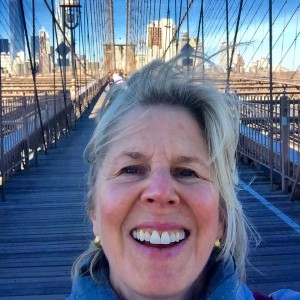 Speechless on the Brooklyn Bridge

I decided recently to get back up on stage to do public speaking.

After my book came out, I delivered keynotes all over the world: Dubai, Sydney, Paris, Beijing, Shanghai, London, etc. It was empowering. It was terrifying. It was a lot of work.

Unbelievably, that was a decade ago. The Corporate Blogging Book was published in 2006 by Penguin Portfolio. This was years before Sam and I took the first steps that led to our Gap Year and to leaving Washington D.C.

This time around I have an ulterior motive for getting up on stage. It’s to help me write a book. The topic is “reinvention.”

I am looking for a way to force myself to tell a story and deliver a message that reinvention is not only possible, it is essential. It doesn’t matter whether you are 55 or 60 or 75 or 85. The last act of your life matters and you must give it meaning, no matter how uncertain or difficult that might seem.

So I’ve deliberately sought out a situation (a public speaking program) where there is no safety net. When you’re up on stage, it can feel like you’re swinging on a trapeze. You could fall and die! Of course, that is just a feeling. Few people die from giving a speech. But along with fear of snakes (agh!!) and heights, fear of public speaking tops the list for most Americans.

Getting over fear of the “shitty first draft”

For some of us, fear of writing something crappy is near the top of the list as well. It’s a fear of the shitty first draft (SFD), a term coined by the wonderful Anne Lamott.

I’ve been wrestling for over a year with how to write this book about reinvention, taking a gap year, and embracing uncertainty. I haven’t figured out how to organize it or what the framework or formula is. I’ve been blocked. I’ve procrastinated. I’ve made excuses.

My placeholder title is Reinvent Yourself. Write a Book. Yes, a section on “how to write a book” fits into it. A lot of people (especially older professionals) want to write one. One study says that 81 percent of Americans want to write a book. It is the ultimate expression of your expertise and knowledge. It is a way to create meaning out of your life and your work.

(Readers of this blog know a certain someone who is doing just that. Update soon from Sam on his book.)

So what is the problem? I’ve written and published a book already. Why is it so hard to write another one? I’ve been blocked by the necessity of getting a SFD down. I’m a perfectionist and an experienced writer with a devilishly strong inner editor. She makes things more difficult than they need to be.

Most important, I’ve been using the word “struggle” too much. It’s a very bad word. It doesn’t correctly capture the process of writing. Say you get up on stage to try out a story you want to include in a keynote. You haven’t told it before. So you sputter and improvise and try to be clear and to connect with your audience. What is that called? It’s not a “struggle;” it’s a rehearsal.

The same applies to writing. The initial draft of a book is a rehearsal. It’s something you put down to cover the canvas. It’s not a struggle, like drowning, that you’re going to lose. It’s part of the process.

Only after the SFD can you go back and cut out the irrelevant and boring bits and add in what you forgot. And so much more.

Getting rid of shame

It’s to experience this concept of “rehearsing” that is getting me back up on stage. There is no shame in rehearsing. You have to rehearse, multiple times, in order to perform. You can be bloody awful the first time you stand up. You can feel tongue-tied and uncomfortable. It’s OK. It’s part of the process.

And you are not alone. Speaking and rehearsing is not something you do on your own. You are not hunched by your lonesome over your computer. You need a director to help you tweak and an audience to react to what you’re trying to say. That live engagement can be the difference between insanity and hope when you’re creating something.

So that’s why you’ll find me in Philadelphia for four days in April, May, and June. (I’ve done four days in March.) I’m attending Heroic Public Speaking’s Graduate School, run by the amazing Michael Port and Amy Port.

If you want to learn more about the program, check out Michael’s new book, Steal the Show. Read the excellent chapters on creating content and how it is the same process whether you are preparing a speech or writing a book. More on that later.

P.S. Our long stay in Brooklyn… 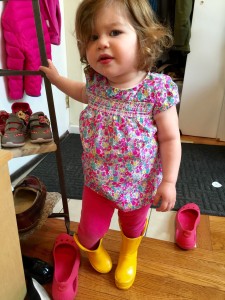 Libby, 1.5yo, hanging around in her yellow boots

We’re winding up a wonderful six weeks in Brooklyn. We head back to Stonington in a few days. We love this schizophrenic yin and yang. We’ve been to plays and museums, worked almost every day in Brooklyn Law School’s library, and played with our three granddaughters as much as possible. Leaving them is so hard, but we’ll be back.

View all posts by Debbie Weil →
Love and Miscommunication: Appearing Together in a Caryl Churchill Play
Selling False Hope: What’s Wrong With This Picture?

8 Responses to On Public Speaking, Writing, and Why You Should Ban the Word “Struggle”