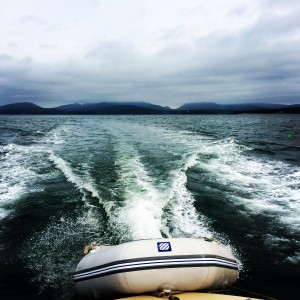 Today is the last official day of our 15-month (courtesy of our British friends) Gap Year. The time for the wrap-up has arrived. What did I learn? What can I pass on?

Let me begin with a quick summary. Having left a progressively dysfunctional healthcare system, a key issue was how would my sense of self survive. Just fine, it turns out.

I never looked back. I spent three uninterrupted months on the coast of Maine in the summer of 2013, highlighted by my first trip to the World Domination Summit in Portland, OR and then, in early fall, a hunter safety course. I started my blogging career and punctuated the time with trips to Milwaukee to visit my aging father.

In November, a short hunting trip with my buddy convinced me to make that a more frequent undertaking. (I bagged my first game, a turkey, in May.) Subsequently, a long trip to Paris (with stops in Amsterdam and London) allowed me to reconnect with France. The highlight of our fall trip was language lessons at the Alliançe Francaise and a final visit with my friend, Simon Hoggart.

Holidays with family in Connecticut were followed by a blessedly quiet January in Maine. Then it was off to Africa to reconnect with East Africa (after 42 years) and to see lemurs in my dream destination of Madagascar.

Back to Maine for April and a bit of May to reconnect with Maine politics, initiate my mentor commitment with Ready By 21, think about healthcare reform and accept the challenge of my first public speaking gig, the six-minute, 30-second Pecha Kucha talk at the Stonington Opera House.

Five weeks in May and June were lost as Debbie and I packed up our D.C. house for a sale that has yet to come to pass. We missed the market by a few weeks and might take a bath on the price. I know there is a lesson in there somewhere but it is not a happy one.

My 45th high school reunion occurred in June and was well worth the effort. Then back to Maine for family, guests, a follow-up trip to WDS, a visit from a young French friend, Bruno Chavanes, and the triumphant rebirth (and immediate death) of my stage career as Doctor B. Lake Noyes in “The Last Ferryman.” After eight SRO sellouts and eight standing ovations, I am retiring on top.

The highlights were structured activities

There were many highlights. In broad terms, structured activities afforded the greatest satisfaction. French lessons, The Last Ferryman rehearsals and performances, my hunting safety course and travel were all particularly gratifying. This blog has been satisfying both for the creativity of writing and the opportunity to express myself.

Unstructured time set aside for reading, networking with people I’ve met and creative energy directed at something other than writing this blog did not work well for me. It is possible that some sparks were ignited by unstructured time and inspired some aspect of my structured play but I do not see or feel that.

The absence of a locked-in schedule did allow for some spontaneous travel decisions that were very gratifying. An example of that was our last minute decision to go to Uganda. But a free-wheeling schedule also contributed to our only failure of the year which was the delayed decision to sell our D.C. home. This contributed to missing the spring market.

One of the goals, perhaps the greatest goal, of our gap year, was to reinvent myself. A folly to a large degree. But I do believe that I have made progress towards personal change. I have always felt more reticent and passive than I wanted to be. To the degree that I was a leader on my former medical staff,I led by example.

The Gap Year has allowed me to try on differing personas and to be “out there” via the blog. Now, I have found my voice and am able to articulate my thoughts on a variety of subjects including the disgraceful behavior of health care leaders over the last decade. It has made me optimistic about honing public speaking skills that I hope to use in the cause of turning Maine into a single payer system state.

I now approach many situations with a Gap Year mindset. I ask myself if I want to deal with an issue as the pre-Gap Year Sam or the post-Gap Year Sam. I frequently accept the challenge of dealing as the post- Gap Year Sam.

In that sense a Gap Year is just another example of self-examination and self-awareness. Because it is coupled with lots of self-indulgence (travel, non-remunerative down time, psychological and physical challenges) it is more fun (and expensive) than simple navel staring, but the fundamental goal of introspection remains the same.

A gap year should be a hard reset

My final thoughts are these. A gap year does not have to be a full year in length and certainly not 15 months. It can be, and should be, some finite period of time that won’t break the bank but is dedicated to a “hard reset” based on a combination of personal challenge, self-examination and some indulgence.

We all are familiar with and live by a variety of philosophical bumper sticker saws (Carpe Diem; Do as I say – not as I do; Live by the Golden Rule; Be the change you want to be, inter alia…). At various phases of life we may emphasize one nostrum over another. My immediate post-Gap Year goal is to speak up and to speak out tempered by the important lessons of WDS 2014 (“Fake it ‘til you make it”) and The Last Ferryman (“Do not fix your neighbor”).

View all posts by Sam Harrington →
A Mustache With Its Own Zip Code
Incremental Change: Debbie’s Gap Year Wrap-Up