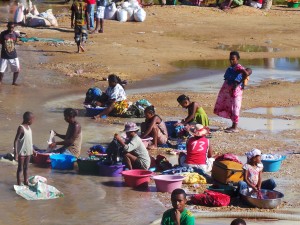 We have been back for a week. It has been a quiet return. I’ve been catching up on bills and creditors, recovering from jet lag and contracting (and then recovering) from gastroenteritis acquired here in the U.S. Debbie suffered a shorter bout in Uganda.

The highlight of the week was a trip to Portland to see the world premiere of Jon Imber’s Left Hand, a remarkable documentary about our neighbor and friend from Stonington, an accomplished and respected painter, who contracted ALS about 18 months ago. The film is the story of Jon continuing to paint with his left hand despite his rapidly diminishing physical condition. 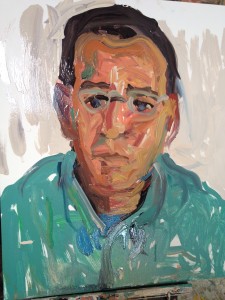 But it’s more than that. Filmmaker Richard Kane surprises viewers with Jon’s humor, his determination and focus, and the extraordinary partnership with his wife Jill Hoy, also a painter. This is a documentary that I can recommend without reservation. It is most appropriate for people touched by debilitating or terminal illness. [A DVD will be available.]

But, when reminded by Debbie to produce a blog post, I am drawn back to our African adventure and the curious confluence of a few circumstances that occurred when we got back under the digital umbrella.

Just before we got back online, Rep. Paul Ryan, R-Wis., and former vice presidential candidate made a few ill-advised comments about the “culture of poverty” in our cities. The editorial pages were consumed with attacking or defending him. My favorite was by Timothy Egan, reminding Ryan of his Irish ancestry and the poverty that befell the Irish at the hands of the British landowners during the potato famine.

If Malaysian Air flight 370 had not gone missing we might still be focused on analyzing his code words for inner city sloth.

In Africa: an endless horizon of poverty

But travelers to Sub-Saharan Africa have to be blind to be unable to see the endless horizon of poor people. Madagascar and Uganda rank with the poorest countries in the world. Off of the corporate plantations, which are largely owned by foreigners, Uganda’s farming is all done by hand. A hoe and machete are pieces of advanced technology. I did not even see draft animals in Uganda, which were evident, on occasion, in Madagascar. It is, effectively, the Bronze Age.

This is cultural poverty writ large.

Poverty in the U.S. has a different look than in the third world. I speak as an observer and not a scholar. Hold on to your hats, I am sure to say something that is not PC.

In rural Uganda and Madagascar, poverty is the norm and expectations are very low. The absence of a middle class and minimal contact with the first world (i.e. tourists), along with limited access to electricity and running water, keeps expectations low and limits the vision of a better life. There is very little visible tobacco consumption. Our guide told us it was too expensive for the average farm dweller. There are comparatively few calories. Clearly alcohol consumption and cheap stimulants (like khat) contribute to poverty but there is less hard drug consumption here.

In contrast, urban poverty in Uganda and Madagascar, indeed in any third world city I have seen, looks very similar. The slums of Kampala and Antananarivo look like the slums of the Caribbean, Rio, Calcutta, Yangon, Manila, Bangkok, Saigon and you name the place.

In the third world, shanties or mud huts define the baseline housing. In the U.S. it is tenements or mobile homes that serve as a touchstone. But other than the physical differences there is something more to U.S. poverty.

The poverty in the communities of Maine and DC, where I have some familiarity, seem to share the same roots of causation: poor education, early pregnancy and poor family planning – as in Africa. But I wonder if a sense of despair in the U.S. communities feeds a drug habit that exacerbates the poverty cycle. The American poor see a better world just beyond their fingertips. They have expectations. Most of the African poor do not know what lies over the horizon.

The most common commonality in these impoverished communities is lack of “family planning.” This is probably a poor use of the term for an excessive birthrate because a large family of many children is in fact the “family” and the “financial” plan for most of the world’s rural poor. For the average farmer in Uganda and Madagascar, children represent many things. At best, they are labor for the fields and caretakers for the elderly. At worst, they are also a commodity to be bought, sold or bartered for sex, indentured servitude or marriage.

It is very difficult to teach people that fewer children and real education will lead to a higher quality of life. Mother’s learn the lesson sooner than fathers. Fewer children mean healthier children. Education means new skills, more efficient farms and more income with which to buy services without having to sell family members.

The great work of FIMRC

In Uganda we saw the seeds of this approach planted by FIMRC (Foundation for International Relief of Children), an organization with seven projects – four in South and Central America and one each in the Dominican Republic, India, and Uganda. At this medical clinic mother’s arrived with sick children. While waiting for treatment, classes were held on birth control and family planning; not to mention AIDS, TB, prenatal care, postnatal care, and malaria. To my eye they are very organized and making a difference.

One does not have to visit Africa to see poverty but it is instructive to know what forms it takes outside of Rep. Ryan’s sound bite. One can also conclude after a trip to Africa that “deprivation,” as a government policy, has not eradicated poverty anywhere, ever.

Top photo by Debbie: taken near Ifaty in southwestern Madagascar where running water is scarce.

Portrait of Sam by Jon Imber: one of 100-plus portraits he painted left-handed during the summer of 2013.

View all posts by Sam Harrington →
Update on Toe Parasite: Debbie Has One Too!
Why Our Gap Year Is 15 Months Long

4 Responses to Poverty in Africa Is Different