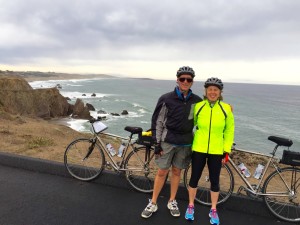 Cycling up the Pacific Coast Highway

We just finished a six-day bike trip through California wine country. We rode about 150 miles in total, more than either of us has accumulated on a bike since third grade. My knees are throbbing. Debbie’s back is stiff.

On the last day and on the hardest climb of the trip, eschewed by novices like me, disaster struck one of the most experienced cyclists in our group. A triathlete, a cancer survivor and a gentle soul, this cyclist was too late unclipping her right foot. She fell and shattered her right wrist. How this relates to the rest of this entry will unfold.

A New York Times article about the cost of care comparing dementia and other chronic illnesses caught my eye recently. It pulled me out of my cyclist’s reverie and rekindled guilt about putting aside my book for 10 days.

The article pointed out that the medical costs of dementia care far exceed the costs of other chronic illnesses. Dementia care is disproportionately an “out of pocket” cost borne by the patient’s families. Most chronic illnesses have a more rapid downhill spiral requiring periods of skilled nursing care, which is paid for by insurance. In contrast, dementia care primarily means longer-term unskilled nursing which is not reimbursable by insurance.

The article also refers to the cycle of treatments demented patients suffer, with recurrent fevers, infections, and resulting complications.

The result is the depletion of funds set aside for retirement of the patient’s spouse or education of the next generation. Families waste the benefits of their financial planning by endlessly “caring” for demented relatives.

The searing images in the New York Times article of a severely demented person reminded me, with a sense of deep gratitude, that my father (who was not demented) lived for only a few days in such a helpless state. Many demented patients live, as depicted in the article, for years.

What does a dementia patient really want?

What were the wishes expressed by that relative as their intellect slipped away but before incompetence arrived? Did they want to spend their last months or years in a state of complete dependence on others? Did they expressly wish to live in an intellectually impoverished condition, unable to recognize friends and family, unable to organize their life to feed, bathe or clothe themselves?

Or did they fail to express and codify their real wishes to pass away quietly when life was no longer worth the struggle?

Studies show that the most important attribute of a “good death” is the ability to assert some control over the process. Another attribute is to a avoid becoming a burden on the family. A painless death and validation of one’s wishes and beliefs are other desirable attributes.

What the patients and families have failed to do in most cases where dementia plays out in an endless cycle of dependence and acute care is to recognize the option of an exit strategy via a natural death.

Most families treat a “fever” with antibiotics because they can and because, in the absence of instructions to the contrary, they must. With some forethought, however, they have other options.

If a patient looks ahead to the potential or actuality of dementia, they can draft a “progressive” advance directive that, at a minimum, addresses their wishes. In this case, “progressive” does not have a political or social connotation. It means, simply, an advance directive in which the stipulations change as the disease progresses.

For example, a patient might foresee a good quality of life during the early phase of mild or moderate dementia. At this point the patient might indicate that a Do Not Resuscitate (DNR) order (i.e. no CPR) be invoked but that acute illnesses and infections be treated.

However, as the disease progresses into the advanced stages of moderate or severe dementia (as predefined by the formerly competent patient and their primary care physician) the advance directive instructs the agent to introduce hospice care and to decline hospitalization or antibiotics on behalf of the patient.

A triggering definition of “severe dementia” might include total care dependence or the inability to recognize friends or family for three months, for example.

Some jurisdictions across the U.S. are struggling with legal issues surrounding progressive advance directives and some are still quibbling over the niceties of refusing “manual feeding.” From a medical perspective, these are morally acceptable and ethical decisions. The law will ultimately have to catch up.

Most people taking the time to personalize an advance directive recognize physician Sir William Osler’s nostrum that pneumonia is “the friend of the aged.” Untreated, it results in a quick and painless death. The same is true of multiple other infections, most frequently urinary tract infections (UTIs). This is an exit strategy that the sentient elderly can embrace and those facing progressive dementia can prepare for.

How does this relate to my book and to pedal clips? Preparation.

Understanding natural exit options and deliberately formulating exit strategies is at the crux of my book.

Of course, no one can control every healthcare eventuality. No one can predict every possible outcome. But once in motion, the inexorable progress of dementia is a fate foretold. Absent an exit strategy, what is guaranteed are dependence, debility, dysphoria, distress and disengagement. Most patients fail to prepare for these eventualities.

Similarly, even the best bicyclists fail to recognize debilitating fatigue and fail to unclip in time. But without adequate preparation on the uphill cycle or the downhill medical decline you have no chance to avoid a world of hurt. 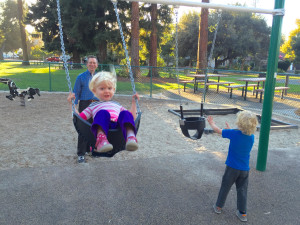 With Josie and Lius in Sunnyvale

In case you’re wondering, we did our first ever bicycling adventure with Backroads, a group that runs cycling and hiking tours all over the world. We chose their Napa and Sonoma route not because we have a keen interest in wineries (we don’t), but because we were able to combine a bicycle trip with a visit to our West Coast grandbabies in Sunnyvale.

All told, we had a great time and we recommend Backroads. The trip was as well organized and well run as we had hoped for. Debbie now has her eye on a 2016 bike trip of Croatia and the Dalmatian Coast. We’ll see.

View all posts by Sam Harrington →
The Angst of the First-time Author
A Milestone? 913 Days and Counting