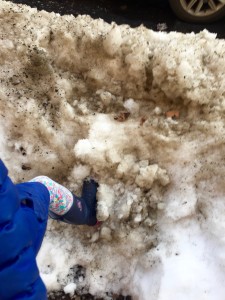 When in Brooklyn I enjoy myself in a variety of uniquely urban ways. (I was back in the big city this week so that Debbie could meet with several book coaching clients.) I get my exercise by taking my three and five-year-old granddaughters to and from their respective preschools. This may not sound like much, but a one-way trip involves walking a total of 11 average city blocks, plus climbing and descending ten flights of stairs while carrying two lunch boxes and two sacks of indoor shoes to replace the snow boots once we arrive at the classrooms.

By the time I have taken off their winter garments, swapped out the shoes, and stuffed their cubbies, I am a ball of sweat.

Curiously, these distractible children, perpetually entertained by the mounds of dirty snow that line each sidewalk, do not share my sense of urgency about getting to school on time. Our “walk” involves a good deal of “encouragement.” How many times was I asked to comment on their footprints? How many times did we have to empty snow from their boots? “Your feet are going to be cold and wet all morning,” I say. “I don’t care,” is the response.

When not writing in the quietude of the Brooklyn Law School library, I have been enjoying lunches at ethnically diverse sandwich shops not available in mid-coast Maine (Cuban, Korean, Vietnamese), and dinners of fresh fish from my local fishmonger (trout, branzino, striped bass, also, unfortunately, not available in winter in coastal Maine).

[ Ed. note: the wine and cheese shop down the hill from us in Stonington sells a spectacular Vietnamese chicken banh mi sandwich.]

When not carrying lunch packs and dry shoes, I am making progress on my book

Having given my book proposal to my copyeditor, I am working on a potential op-ed (or NYTimes Opinionator) piece about the “Tyranny of Treatment,” a topic I address in my book. My thesis is that the default position of overtreatment in American medicine resonates with the unrealistic expectations of patients, especially elderly patients. Overtreatment leads to poor end-of-life decisions and ultimately the tyranny of “medicalized” deaths.

Slow progress on this writing project (I am working on my non-pedantic, compelling prose style) was brought up short by the President’s Oval Office signature of a memorandum creating the White House Cancer Moonshot Task Force.

How timely is this? How many sad ironies do the name and the date of this effort create?

The sad irony of the Cancer Moonshot Task Force

Thirty years, to the day, after the disaster of the space shuttle Challenger explosion, the headlines announce “Obama Takes First Step in a Cancer ‘Moonshot’” (NYT) and “Launching Cancer Moonshot, Biden Says Politics Impeding Cancer Cure” (WaPo). In the early paragraphs of the articles, the words “cure” and “optimism” abound.

Hoping to channel the successes of the space race to the moon, Biden characterizes the effort as a “moonshot to cure the disease.” Obama exhorts the readers with, “Let’s make America the country that cures cancer once and for all.”

Only late in the articles does a reality check take place, when the President is quoted speaking to a 4th grader, “It probably won’t be cured in my lifetime, but I think it will be cured in yours.” (Not, says the author of this blog.)

Later in the articles, Jose Baselga, M.D., president of the American Association for Cancer Research and Chief Medical Officer at Memorial Sloan Kettering Cancer Center is quoted, “A single approach to cancer…ain’t going to happen” and “Cancer, we’ve learned is far more complex than we’ve ever imagined. Every single tumor is different.”

Why didn’t either paper headline the comment of Dr. Otis Brawley, Chief Medical Officer of the American Cancer Society, “Cancer will not be cured this year”?

A layman’s vs. doctor’s definition of cancer “cure”

Nowhere in the articles does the medical definition of cancer “cure” appear. To the reader a “cure” means long-term cancer-free existence. To a doctor, a patient is “cured” of cancer if they survive for five years after the diagnosis. It doesn’t matter how many treatments it takes, whether the cancer remains active at the five-year mark, or if the patient dies of the cancer at five years plus one day.

Yet, the impression that the politicians want to make is that finally the government (their administration) is taking charge and a “cure” is just around the corner. Unfortunately, the newspapers aid and abet this political PR message. Most people will read the first few paragraphs and assume that “victory” in the 50-year “War on Cancer” is at hand.

I look at “moonshot” and I see two different interpretations. At worst, the most common use of “moonshot” means a ball lofted with a high trajectory, especially a court-length, last second, desperation basketball shot that is usually doomed to failure.

At best, the 1969 moon landing was an expensive, dangerous, difficult-to-reproduce success of dubious long-term value. This is not the “optic” the administration wants to project but it is ironically close to the truth.

Cancer treatments are already astronomically expensive and newer treatments will be exponentially expensive. With an aging population, elderly patients will make up an increasingly large majority of cancer patients and their “cures,” at great costs, will also be of increasingly dubious benefit. Complications – think the Challenger explosion – will be unpredictable and calamitous.

Of course, progress in cancer prevention, diagnosis, and treatment has been made and future progress must be undertaken and supported. Young people with a cancer diagnosis do gain valuable time with treatment and a significant percent are “medically cured.”

But, presenting an overoptimistic outlook feeds into the unrealistic expectations of the American public and leads to increasingly futile overtreatment. Let me rant further: The New York Times and the Washington Post are being coopted by Obama’s political agenda (to “promise” a cure for cancer) when they publish misleading headlines about cancer.

Cynics will respond, “Caveat emptor,” to the subliminal message that “cure” is available. The elderly, in particular, will pay for false promises. They will pay with the discomfort and complications of near futile therapy and the loss of precious quality time.

It is not “news” to hear a politician announce the next attack in the 50-year “War On Cancer,” just as “Dog Bites Man” is not newsworthy in a national context.

Let’s have the President announce the creation of a task force that re-educates the American public and resets realistic expectations. The headline I want to see is: “We Are Not Going to Cure ‘Cancer’ in Your Lifetime.”

Oops, it is already time to collect a granddaughter and puzzle over her endless fascination with the mundane melting mounds of Brooklyn’s soot-tarnished snow. Luckily for her, there is no deadline getting home.

View all posts by Sam Harrington →
Update From The Writer’s Garret or The Passive Voice Has Been Well Used By Me
Love and Miscommunication: Appearing Together in a Caryl Churchill Play

5 Responses to Reflections on Dirty Snow and Political Hyberbole