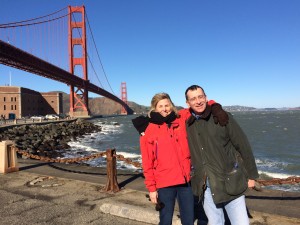 This city of seven major hills (each capped, as far as I can tell, with a massive apartment tower) and 42 minor hills (49 in all) surrounds a vibrant business center built on landfill in the Bay. Vistas abound as one sequentially mounts the hilltops. Nob Hill is a brisk 30-minute walk. Eclectic architecture mixed in with classic Victorian townhouses catches the eye. Yet, the vistas afford views of uninteresting rooftops and a paucity of greenery that fails to transport me beyond the thought that something (nature?) is missing.

(Ed. Note: I loved walking the hills of Pacific Heights but I will admit that when we found Mrs. Doubtfire’s house at 2640 Steiner Street, the dramatic vista captured by the movie camera was flattened in real life. – Debbie) 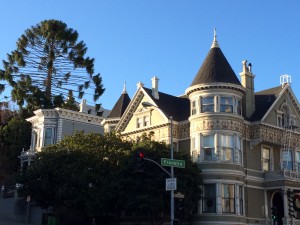 Having taken several tours and watched several programs on the history of San Francisco it remains that only two important episodes define its past: the Gold Rush of 1849 and the Earthquake of 1906. The present seems to be defined by the current rush of “Tech” speculation and waiting for the “next big one.”

“He sold his company to Google for $x million.” “Well, she sold her company to Yahoo for $y billion” are snippets of everyday conversation as jegging-clad Millennials tred the Stairmaster hills with phones embedded in their ears or between tapping thumbs. Variously described as the youngest, most vibrant, or most overpriced city in the U.S., San Francisco is probably all of those things, and more.

It seems cleaner than NYC, and warmer. But this might just be the bright sun. There is still plenty of dog waste on the sidewalk. It probably is no more entrepreneurial, consumer-driven, or high tech than New York but the illumination and endless stream of software engineers makes it seem so. 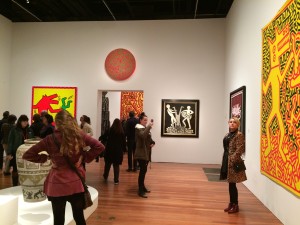 The Keith Haring retrospective at the DeYoung Art Museum was one of the highlights of our visit. He was warning about the curse of technology in the 1980s. I cannot help but wonder if touchscreens are not the next scourge. Just as the unintended consequences of corn syrup, leaded gasoline, carbon emissions, fluorocarbons, and tobacco products have lead to an epidemic of obesity, cancer, and global warming – in addition to massive fortunes – I wonder what scourge touchscreens will spawn.

After ten days of West Coast consumer culture and suffering the oxygen deficit of a long flight home I leafed through a Sky Mall catalogue. There, in the T-shirt section, I found a slogan I can embrace. “I used to be a people person but people ruined that for me.” Now I just want the quiet and space my fishing village affords.

Debbie says this is a glass half-empty way to end this post but I am going to say it anyway: technology may be San Francisco’s next gold rush but a good 9.9 on the Richter scale will flatten this place.

Photos: snapped under the Golden Gate by our wonderful guide on a Viator.com tour of the city including early-bird admission to Alacatraz; then Debbie’s photos of a typical cityscape at the crest of a hill in Pacific Heights, and Keith Haring at the De Young.

As this is a post about San Francisco I didn’t mention the best part of our trip: visiting with our son and daughter-in-law and two grandchildren who live in Sunnyvale.

Lius, 3yo, at the Googleplex 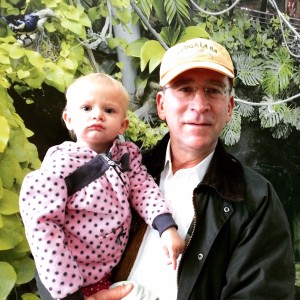 Ba and Josie, 1yo, at the California Academy of Sciences

granny and the grandbabies at the CAS