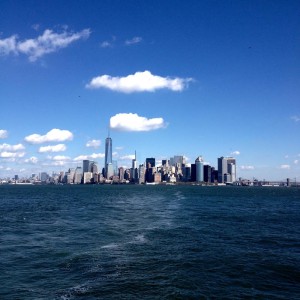 It has been a week in Brooklyn and I can see potential rhythm in the cacophony. I have found the building blocks of my urban lifestyle. I know where to buy my beer and wine. I have found several powerwalks. I have taken the A train and the F train. We have bought our laundry bag and chosen our “wash and fold,” same day, laundry service. We are purchasing microwavable dishes from FreshDirect home delivery. I have mastered the galley-sized kitchen. I know where to get fresh produce, dry-aged beef and how to get personalized hamburgers from Shake Shack. I have my eye on a barbershop. Henry Public is a nice gastro pub but a poor excuse for Martin’s Tavern in D.C.

Our apartment is 100 yards from my mercurial granddaughters and their gracious parents. I have been to an off-Broadway show (Tail! Spin!), the 9/11 Memorial Museum and Ellis Island. I have discovered – and am contributing to – New York Times reporter Elizabeth Rosenthal‘s Facebook group, Paying Till It Hurts.

Life is better. Indeed, it is exciting.

But what is missing? The energy, complexity, wealth, poverty and congestion of Brooklyn are stunning. The stimulation is overwhelming. Self-absorption is the protective response. The cycle between excitement and withdrawal becomes addictive. The more we have, the more we want.

Living in Brooklyn is like eating in a Chinese/German fusion cuisine restaurant: thirty minutes later you are hungry for power.

What is missing is peace. In Stonington one has to seek out activity and contact. Being quiet at home is the norm. In Brooklyn the world washes over you in waves. It is necessary to withdraw to find quiet but withdrawing in Brooklyn feels like hiding. And that doesn’t feel right.

It has come to light that Debbie and I have approached this month from two different perspectives that merit recognition by Gap Year Extenders.

I think one month is plenty of time to experiment with the place. Debbie thinks it is not enough time and wants to check out other rentals. I am looking at Brooklyn as if I were a tourist who is interviewing the city, among others, for a potential pied-á-Terre. Debbie is ready to forego further experimentation and to invest much more time and money – as if the choice is already made.

The post-urban Gap Year Sam wants to use Stonington as a new home base and to find some urban setting for future forays into culture, crowds and congestion. The re-urbanized Gap Year Debbie has her arms and legs wrapped around Brooklyn like a toddler attached to its mother on the first day of school. (Ed. note: Ha! Well, he nailed it.)

Definition from Wikipedia: “Yin and yang can be thought of as complementary (rather than opposing) forces that interact to form a dynamic system in which the whole is greater than the assembled parts. Everything has both yin and yang aspects, (for instance shadow cannot exist without light).”

Photo: Sam’s view of the Manhattan skyline on his ferry ride to Ellis Island.

View all posts by Sam Harrington →
First Day in Brooklyn… Oh My (Meet Libby!)
Ebola Is Here: Lessons for Our Dysfunctional Healthcare System Are Coming