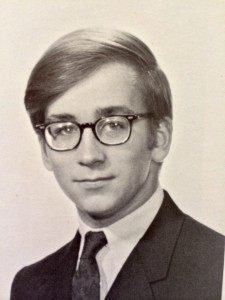 It is dawn after my high school reunion at Milton Academy, just south of Boston. I’m waiting for the taxi, then a long bus ride home to Maine.

My classmates are dispersing soon. I am anxious to get north and start the summer, indeed to start the next phase. This past five weeks in limbo, in D.C., was debilitating. [Ed. note: we have moved out and put our house in D.C. on the market. – DW]

What is the point of reuniting? Is it to tell our tale, hoping to relate to others and thereby find our “sad song” acceptable? Is it to restore memories, backwatered in our minds by the rush of life? Is it to reconnect, show off, strut, whine, fuss or muse?

I suppose that there is a little of everything in high school and college reunions but I think that the emphasis changes from year to year. Early reunions are most likely about maintaining friendships.

A little background: I went to Milton, a boarding school, from a Milwaukee public school and spent four very formative years there. It was good for me and  set me on a path that led to Harvard, medical school and beyond.

The 25th is probably the strutter’s waltz. The reunions of advancing years  – 40th, 45th and 50th – involve progressively more reflection, seeking acceptance of the paths chosen and the tasks completed.

Certainly the most common theme of our 45th was one of transition. How did we get here in life and where do we go from here given the overarching sense that we are in a pre-retirement period? How do we maximize our appreciation of things past, marshal our strength to re-invent and carve out time to reflect and enjoy?

Of the eleven “boys” in attendance, three were attending a Milton reunion for the first time. They had been expelled for misbehavior or poor performance. Each found the experience formative, defining their future paths. Each held an understandable resentment toward the school and, perhaps, toward the boys who appeared to be “succeeding.” Yet each one seemed to reflect on his memories, reconnect and arrive at his own, separate, peace.

As my fingers type that phrase I cannot help but think the school would have been better served if we were required to read that book, A Separate Peace, toward the end of our education rather than the summer before matriculation. 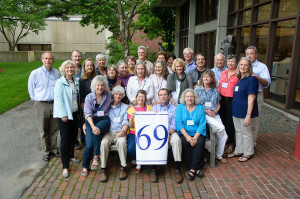 Our experience at the school was formed by several factors. We all recognize the general angst from which teenagers suffer. Stir in a healthy dose of 1960’s sex-drugs-and-rock’n roll, a pound of institutional inertia, some administrative malpractice and four years of excellent education and you have my class of 1969. I’m in the blue shirt holding the “69” sign in the photo.

Twelve out of 60 have passed away. Eight have died by our own hands (suicide, drug overdose, drunken driving). Four others died of premature illness.

It would be nice to reach out to the rest for our 50th.

View all posts by Sam Harrington →
Report From the Void: Sam’s Reflections After 12 Months
State-of-the-Art Screening Saves Lives, But At What Cost?