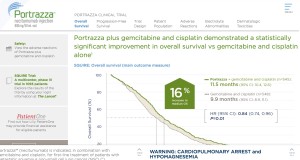 Portrazza offers a significant “improvement” in survival from a type of lung cancer. Translated: six weeks.

It has been a couple of months since I have been able to find the bandwidth to write for the blog. During the last few months, I wandered along the coast of Florida, stopping briefly for an introductory course in public speaking. Then I returned to the streets of Brooklyn, where I filled the hours with rewriting my book proposal in the vision of my book agent.

That proposal will be circulated to publishers in the next week or two. I have also written two small “first persony” opinion pieces that have been tentatively accepted by The Washington Post for publication later this spring and summer.

Because of the contract with the Post, the content of those pieces are their property and I have to avoid recreating any part of them until after publication. This fact takes a number of options off my word processing plate for now but I will think of more things to write for the blog. If you have a request, let me know. It’s too early for more adventures in lobstering.

And, stay tuned to the Post! Don’t worry if you don’t subscribe. I will be linking to the articles after publication.

My frustration about drug pricing

Instead, let me address drug pricing for a minute. There have been many stories about the excesses of the pharmaceutical companies in the last six months. Mergers, tax dodging, halted mergers, and, most frequently, profiteering through “creative” pricing have made headlines. My frustration lies at the intersection of drug advertising and the absence of free markets in the consumption, pricing, and delivery of drugs in the U.S.

The results of this nexus are the nonsensical yet exorbitant costs of our drugs and the blind faith with which Americans consume them.

The protection of the U.S. pharmaceutical companies by congressional fiat and the powers they accrue from these protections allow Big Pharma many non-free market based opportunities. No other developed country pays the prices we pay for medications and yet – their health outcomes are generally better than ours.

Cost-competitive generics from abroad have multiple regulatory barriers to marketing in the U.S. American companies are protected from the importation of low cost drugs from Canada. Yet, they are allowed to market deeply discounted (but still profitable) drugs to the third world while maintaining higher prices and excessive profits here. Big Pharma packages this as exemplifying their “social responsibility.” And Congress prohibits Medicare from negotiating drug prices with the pharmaceutical companies.

The United States and New Zealand are the only developed countries that allow direct-to-consumer advertising of prescription medications. Such advertising has been increasing rapidly. In 2014, $4.8 billion was spent on prescription drug ads in all media, up 14 percent over three years. During the same period, television advertising increased 55 percent. (Numbers from a recent article in the New York Times by Elisabeth Rosenthal.)

Simultaneously, cancer medications have become so expensive that groups of physicians have united to protest their usurious cost and the limitations this places on their ability to treat patients.

TV ads for chemotherapy play on the psychology of the consumer

Just as Joe Camel was able to sell the addictive poison of tobacco products to earlier generations of smokers, television ads for chemotherapy play on the psychology of the consumer unmercifully.

If we see the immorality of selling tobacco products to children, why don’t we see the moral equivalence of selling false hope to the desperately vulnerable? Why do these ads show beautiful and handsome middle aged patients spinning about town in a top-down convertible instead of gaunt, wheelchair bound, unkempt patients with oxygen in their noses?

Because, that dream sells.

The latest generation of agents used to delay death by lung cancer highlights my particular perspective on this problem. Television ads for these products promote the opportunity to “live longer” while minimizing the risks, avoiding the costs, and ignoring the fact that these “targeted” therapies have little practical benefit, extending high quality life for the minority and extending low quality life, for a very limited time, to the majority of consumers.

Portrazza, one of the new generation of agents for treating lung cancer is an example. It is specifically indicated for one type of lung cancer (squamous non-small cell lung cancer). The “statistically significant” average increase in survival per patient is six weeks. The cost of Portrazza is $11,430 per month.  The median time of use is 5.7 months (it is discontinued when there is evidence of tumor growth). See graph at top of this blog. (If you want to see it online, choose “healthcare provider” when you first click through. Otherwise, you will not see the graph – !)

Are the cost – or suffering – worth it?

A back-of-the-envelope calculation shows that the cost of treating a single patient to gain an average of six weeks of survival is more than $65,000. More than 75,000 patients are diagnosed with this disease annually. If they all were treated those annual drug costs would be $5 billion. Keep in mind, this is only one subset of lung cancer, which as a whole is newly diagnosed in more than 220,000 people per year. There are equally expensive treatments for the other subsets.

This is obviously not sustainable. So what is out of whack here? There are several factors. The absence of market forces that benefit patients and unregulated corporate greed raise the price of a plentiful supply while misguided consumers, addled by misleading advertising, raise the demand.

How to fix the problem: regulation, educate consumers, and eliminate advertising

Regulating this unfair and unbalanced market, educating the consumer, and eliminating advertising are the answers to the problem.

Last November, as part of a new policy aimed at reducing drug costs, the AMA called for a ban on direct-to-consumer marketing of medications and devices. The next step is to find politicians who will put it into law. These things can be done. Hey, ultimately the country saw the wisdom of restricting the advertising of tobacco products.

Medicare For All sounds “un-American” to 50 percent of our voting population, but it sounds like common sense to the other 50 percent. A variation of that single payer system is what every other developed country has and with which they hold pharmaceutical excess at bay. Remember, the cost of these drugs is passed on to us through increased private insurance premiums and reduced Medicare benefits.

The enrichment of American corporations at the expense of the common man may be an historical fact, but it is not the American ideal.

At times the government, as an agent of the people, has stepped in to break up monopolies and regulate uneven markets. That time is now for Big Pharma. This will only happen if every voter takes a political stand against politicians beholden to Big Pharma. And if every voter stands behind local and national politicians who support true reform.

At a minimum, don’t go to your doctor with questions about the promise of a drug you have seen advertised.

Instead, ask “What’s wrong with this picture?”

View all posts by Sam Harrington →
On Public Speaking, Writing, and Why You Should Ban the Word “Struggle”
Reinvent Yourself. Get a Truck. Write a Book.

6 Responses to Selling False Hope: What’s Wrong With This Picture?