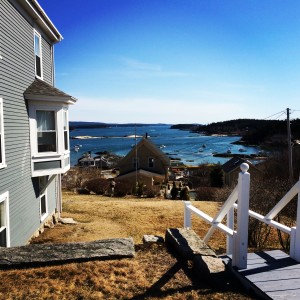 The daily high temperature is above freezing. The snow has largely melted except for pockets in the woods. We can take walks without a hat and gloves. The trees and grass are still brown and barren – just a hint of buds. But the water sparkles a magnificent blue in the distance. It’s spring on the coast of Maine!

We have been warned repeatedly about this time of year and how grim it can be. Mud season they call it. We’ve had our share of rainy days since we returned from Africa almost four weeks ago. Along with a few snowstorms, including one on April 1st.

So far it’s not that bad. The worst part has been the frost heaves and bone-jarring potholes on Route 15. That’s the one artery that connects us to the mainland. The two-lane road runs south to north from Stonington at the tip of Deer Isle, across the distinctive Deer Isle-Sedgwick suspension bridge connecting us to Blue Hill Peninsula, through picturesque Blue Hill and then up to Route 3 on the mainland. 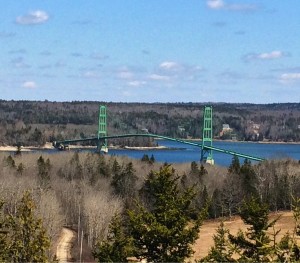 The road is in such poor condition it has been the subject of numerous newspaper articles. The Bangor Daily News calls it “pothole purgatory.” The Deer Isle Advantages calls Route 15 “bone crunching, teeth breaking, backbending, neck-cracking, belly-turning.” The local town councils are banding together to protest to the state that something be done and that long overdue road improvements be made now. This is the kind of local politics I find quite interesting. We’ve all got a dog in this fight, including the lumbering trucks which trundle down to Stonington and then haul lobsters back up to the mainland. The wear and tear is costly.

Somehow this feels more real than when we’re back in D.C. and Congress is asking for budget cuts or the Supreme Court lifts the limits on Congressional campaign contributions (as important and vexing as that is). I say that with some embarrassment. We lived in D.C. for 30-plus years and I read the Washington Post for many of them. But much of the news didn’t seem personal.

I drove to Blue Hill Books recently to patronize one of the very few establishments open during the winter months. (The summer season starts in mid-May.) The trip took 50 percent longer than usual because of the frost heaves and left me feeling slightly nauseous. No matter, the bookstore proprietor greeted me with a cheery, “Happy Spring!” Followed by, “Well, it will only snow one more time.”

I am learning to truly value each and every community resource (shop, restaurant, library) that stays open in the off-season. When there is less, you tend to enjoy it more. In addition, we’ve discovered the pleasure of small informal dinners with friends, at our house or theirs, because there is nothing else to do. Unlike at big dinner parties in D.C. there is no posturing or one-upping.

Bottom line, what I’ve been terming an “experiment” seems to be turning into a reality. For months I’ve been telling friends back in D.C. that we are “experimenting” with living on the coast of Maine. Sam, by contrast, says he is “living” here. A difference in semantics, perhaps, but also in mindset. Slowly, mine is turning. I’m starting to call Stonington “home.”