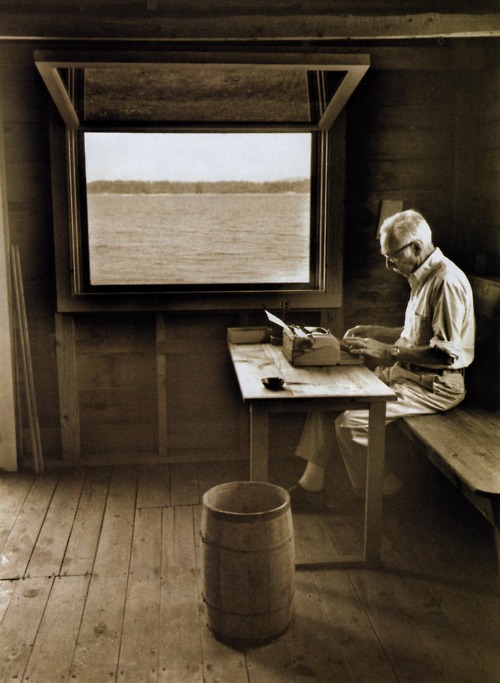 Living on the coast of Maine is very special. It is a constant battle with the elements even when the sun is shining and the wind is calm. I began my day, which is cool and foggy, with a visit to the basement to explore the (disturbing) absence of noise from my sump pumps.

I found their pores clogged. I opened one pump’s inlet pores to make it operational for the impending showers. Then I put it back online. It worked, although the disrupted connections now leaked a bit. Still, I felt accomplished with my male version of The Happiness Project and even happier with my subsequent decision to call the plumber to muck out the drains and professionally reattach the pipes.

All of this before six in the morning. I love calling the local businesses at 6 AM and finding them open and ready to work. Do I sound like E. B. White yet?

I came back from the World Domination Summit with a renewed sense of self worth, even without a professional title. As part of the trip back, we paused for a night at the home of a childhood friend. He is a plastic and hand surgeon. He was late to greet us because of an add-on case involving the loss of three digits [aka fingers] to a band saw.

We had a great dinner and he left earlier the next morning than expected when he was called to the OR for an abscessed finger. I envied his energy and his professionalism. But I am still savoring my new freedom.

I also reminded myself that he has carved out a part-time practice, and although busy at the time of our visit, he generally works only four days per week and takes four months of vacation per year. I never figured out how to do that. A professional, caring, gastroenterologist had to be more available than that to keep a practice alive in Washington, DC.

What the word “profession” means

This is what used to separate practitioners of law, medicine, and journalism from the average businessman.

In the course of a business transaction two parties will come to an agreement. If one party benefits more by the agreement than the other he is considered a good businessman. Both parties came together willingly and with equal standing in the transaction.

In the true professions (law, medicine, education, journalism) the relationship between the professional and the subject is asymmetric. The doctor or lawyer has a vast knowledge base that the patient or client does not. The patient or client relies on the doctor or lawyer to exercise judgment in the treatment or recommendations rendered. They pay for the expertise with the understanding that the professional will exercise restraint and in no way abuse the position of power and authority that they hold.

Journalists have power over their readers that requires the exercise of judgment and restraint in reporting events. In this asymmetric relationship the reader relies on the writer to tell the truth.

We all know how teachers have power over students. We expect teachers to inspire and stimulate students without abusing their position or teaching a misguided perspective.

My lament: professions have turned into businesses

Over the last few decades we have seen professions turned into businesses. In the realm of education we have seen for profit schools take federal loan money and churn out workers unable to find jobs.

We all know lawyers who complain that the business aspect of their firm’s activities must be satisfied first. One elderly lawyer has said to me that when he started practice the best legal advice he could give was independent of cost considerations. When he left practice the “best” advice was that which made the most money for the firm.

Journalism is a difficult profession to contain by ethical standards because it is so easy to slip into a PR mode or to shade the truth to sell a product. It is also easy to confuse rumor and opinion with news. The growth of the cult of celebrity in our culture compounds the problems in journalism as celebrity journalists become more influential than thoughtful journalists and the distinction between journalism and entertainment is blurred.

As I pour out this sanctimonious rant on professional behavior I remember Professor Wilmott Ragsdale’s favorite expression, “Journalism, a profession? I don’t think so. Boxing is a profession!” So, I recognize shades of gray in all professional activities. [Ed note: Rags, as we called him, was my journalism professor at the University of Wisconsin in the mid-1970s. He was the best teacher I ever had.]

Yet, I lament the loss of professionalism in medicine. For in medicine the business model has become paramount. Whatever makes the most money for the practitioner is the best medical care. It is sad to see and as I wrote about the use of propofol delivered by anesthesiologists for routine colonoscopies, it is a disgrace.

The largest group of gastroenterologists in the Baltimore/Washington/Northern Virginia region took a vote about the use of conventional sedatives (as recommended by the professional societies that guide subspecialty care) versus the employment of anesthesiologists that would allow them an additional revenue stream and more profit. The majority voted for the added revenue even though this does not improve quality of care. Do they discuss this with patients? No, they tell the patients what “is best” and the patient accepts the advice.

I am advised by other colleagues that whole hospital systems have adopted this use of propofol by rationalizing that they are standardizing treatment across a spectrum of care but the real reason is to increase cash flow in a world of increasing hospital costs and decreasing revenue.

Anything goes in a business transaction but revenue should not be the driving force in a professional consultation or treatment. As Dr. Steve Nissen, of the Cleveland Clinic said in the documentary Escape Fire: the Fight to Rescue American Healthcare: “When we made medicine a business, we lost our moral compass.”

Bless those who have the moral fiber to stand up to the commercialization of medicine.

I am going back to the basement to check my sump pumps.

Photo is of E. B. White writing in his boathouse in Allen Cove, Maine. Courtesy of Andrew Romano.

View all posts by Sam Harrington →
Tapping into the hunger for change at World Domination Summit 2013
Finding structure without patients and hourly appointments; proton beam therapy and more