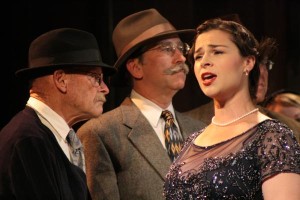 It is the morning after the last matinee of The Last Ferryman. No rehearsals, no performances, no house guests, no family and no other structure are complicating my day. What an experience it was. Eight sold-out performances and eight standing ovations after six weeks of rehearsals and performances. I am ending my revivified theatrical career on top. 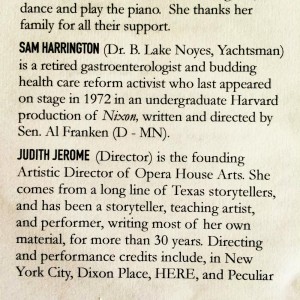 I marvel at the way the actors and actresses moved in and out of their roles. I had to focus constantly on my next set of lines and my entrances and exits or I might find myself in the wrong spot or going blank in the middle of my lines as I did on opening night. The creative (equity) artists, however, would leave the stage, pop earphones into their heads, go on Twitter and carry on unrelated conversations before returning to their roles without a moment’s thought.

Who would have thought that the cast of nearly 30 people would all stay healthy and would all arrive at every performance on time? What was the back up plan? Indeed, after the third performance the oldest cast member took a terrible fall. She suffered multiple contusions, several lacerations and a broken nose. But she made every subsequent performance. There were four cast members over the age of 70 and given the raked stage, the awkward stairs, the dimly lit backstage and staircases, the quick costume changes and the unreliable folding chairs it is a miracle that no more serious damage was done.

I backed into this endeavor without the usual consideration I would apply to a “Gap Year” activity. In retrospect, I knew it would be a challenge and I knew it fit the goal of redefining oneself, but I had no idea how demanding the commitment would be.

The rehearsals dictated each day’s schedule for weeks and the performances required me to pace each day so that I was at peak mental capacity at the hour of the evening when I was usually letting my mind relax. I had no idea how rewarding the challenge would be.

Do Not Fix Your Neighbor

Perhaps the greatest take home lesson, one with broad lifestyle implications, was the admonition of one of the pros who firmly told us, “Do not fix your neighbor.” By way of explanation, in the hyper-choreographed world of musical theater the temptation to adjust some flaw in the position, posture or performance of another cast member is intense and omnipresent.

There is always some bit of advice one can give to improve another actor’s performance. No matter how well intentioned such advice might be, it ultimately proves to be petty, fruitless and self-serving. In the microcosm of theater and the cauldron of stage management such nit picking is destructive. The fact that one can only change oneself is especially evident on stage. At the same time, it is a life lesson always to be kept in mind.

Would I do it again? I don’t think so.

Was it a wonderful experience? Absolutely!

Photo credit: from Maine Public Broadcasting Network. You can read and listen to an article about The Last Ferryman.

4 Responses to The Letdown and the Lessons: Sam’s Time on the Stage