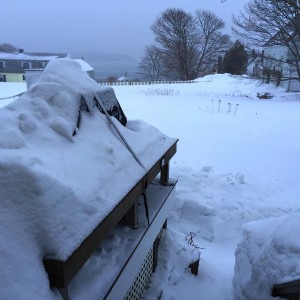 February is one of the dreariest months of the year for those of us trying to embrace a northern climate. This year, the bleakest month has been belabored by more snow, wind, and cold in the Northeast than has been recorded for decades. For my own part, a case of flu and subsequent bronchitis has put me in and out of bed for nearly two weeks. I am ready for March.

Take acute bronchitis as an example. This is an illness that frequently accompanies another upper respiratory infection (URI), be it a simple cold or the actual flu. In the case of the flu, the debility of malaise and body aches (myalgia) is depressing enough. Add the hacking cough of acute bronchitis and the result is frustration for both the patient (me) and the caretaker (Debbie).

I am not trying to cough, I can’t help it.

Stop trying to clear your throat.

Antibiotics are over prescribed

One of the great failures of medicine over the last 70 years is the explosive, extensive and excessive use of antibiotics for URIs. We doctors have conditioned the public to expect an antibiotic at the end of an office visit even when most of the infections are viral.

Viruses are not responsive to antibiotic therapy. They must run their course. We have conspired to rationalize the treatment as “preventing pneumonia,” “clearing up a secondary bacterial infection” or the like when one of the primary motivations is to move the patient out of the office and to give them some hope to deal with the frustration of waxing and waning symptoms. We all have come to believe in hope over science.

Yet all the science related to acute bronchitis finds minimal to no evidence of benefit with antibiotics. A 2014 meta-analysis of 17 randomized studies of antibiotics for acute bronchitis revealed that the cough was reduced by 12 hours for the antibiotic treated group.

This means that if the average cough duration was 12 days for the placebo group, the antibiotic group coughed 11½ days. In return for the 12-hour reprieve the antibiotic group had side effects of nausea, vomiting, diarrhea, headache, rash or vaginitis in 1.5% of recipients.

Another large study noted that antibiotics can decrease the risk of subsequent pneumonia in patients with acute bronchitis who are 65 years old or older. But the conclusion was that 39 patients must be treated with antibiotics to prevent one case of pneumonia.

The negative side effects of antibiotics

Yet another negative side effect of antibiotics is antibiotic-induced colitis (an inflamed colon). This presents as bloody diarrhea. It can be fatal. I cannot begin to describe how many patients I cared for with this condition over the years of my practice. It is a particularly frustrating condition to deal with when it didn’t have to happen. In other words, the indication for the inciting antibiotics was weak. Clearly, my experiences with this illness have influenced my anti-antibiotic perspective.

So, where am I now? I am in my tenth day of debilitating symptoms and heated philosophical debate with my caretaker. After a few days of possible improvement I have had two days of relapsing cough and congestion. Intellectually, I am without clinical signs of bacterial super-infection but emotionally I am at my wit’s end. Even I have begun to believe in hope over science. I am closing in on 65 years of age. Might I be the 39th person on antibiotics who forestalls a case of pneumonia?

March seems to be a long way off.

And I have travel plans. I must get better.

I’m succumbing to the hype

I am too tired and sick to stand up for science. I am calling for antibiotics ASAP.

It is now two days later. I am feeling slightly better. Although it is snowing again outside my window, I believe I am on the mend. Antibiotics or not, things are looking up.

Photo: the view from our back door snapped by Debbie