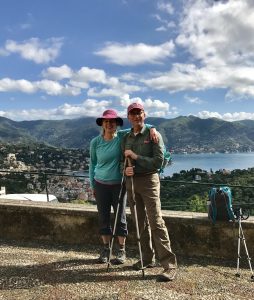 I’ve sent the final draft of my manuscript to the publisher and it has been accepted for publication. With that behind me, Debbie and I “snuck away” recently for a trip to Italy – a walking tour of the coast of Liguria and the hills of Tuscany. It proved to be a delightful and illuminating trip.

One of the unexpected delights of our first few days was a trip to Pisa, giving us 24 hours in and around the square that is most well known for the Leaning Tower. This cluster of buildings consists of the cathedral or the Duomo, the Baptistry, and the Campanile (aka the leaning tower).

On arrival, we enjoyed their architecture from a distance as we sat in our hotel’s rooftop bar trying to restore our jet-lagged selves with a glass of wine. The next morning, we plunged in. To our surprise, the leaning tower was much more beautiful and compelling than we had expected. The architecture and the marble were exquisite. 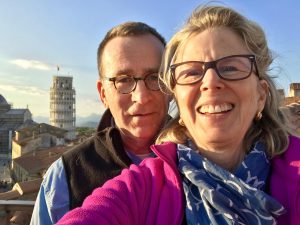 We arrived at the base of the tower before the tourist crowds had peaked and were able to secure a ticket and a chance to climb the 256 steps of the tower by 9:30 AM. I had no idea that 5.5 degrees of tilt would be so disorienting.

Entering the tower and climbing the stairs was the equivalent of a few minutes of StairMastering in a twelfth century nuthouse. The marble steps were heavily and unevenly worn. The walls of the stairway either leaned over you, claustrophobically, or fell away from you unnervingly. People popped out of the stone stairwell onto the 16th story sucking wind, clutching their chests, and giving eye-popping thanks at being able to see the sun and a level horizon.

I walked around the top of the bell tower several times. I was soaking in the view and listening to sublime and ridiculous thoughts rattle around my oxygen-deprived brain. How could the original engineers, clearly knowledgeable in the masonic arts, have chosen such a fundamentally flawed site for the bell tower? How could these same artisans have compounded the leaning by adding height (and weight) to the sinking side? Why would tourists choose to climb a bell tower in flip-flops or high heels?

I enjoyed a Bill Bryson moment when I overheard a resident of the U.K. cell-phoning down to his travel companion to coordinate a photo-op, “ I can’t see you, now, I am on the leaning side.” “I’ll just make my way around.”

Um, the whole thing is leaning…

“Leaning side?” This architectural whimsy is a cylindrical solid. The whole thing is leaning. There are no sides (except an inside and an outside). I concluded (in a less than gracious Brysonian judgment) that this guy was a British nitwit who had voted for Brexit and whose photo-op would not produce a recognizable visage.

But, I should try to be more generous. Maybe he was suffering from oxygen deprivation, too.

In any event we wandered around for the rest of the day and dined sumptuously on Florentine beef and rabbit that evening. 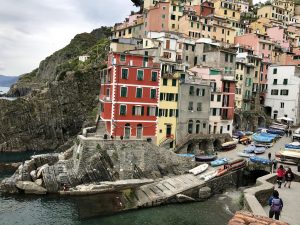 The next day we joined our hiking group and bused to the Ligurian coast and Portovenere from whence we began our hiking in earnest. I won’t overwhelm you with detail but I will say that Cinque Terre was not quite what I had imagined. I had been picturing five distinctly quaint Italian villages clinging to warm slopes cascading into a serene, inviting sea.

The villages are seconds apart when connected by an efficient train system. The buildings were, indeed, pastel in hue but the sea was a foaming iron gray tumult and the hillsides were slick with mud and rainwater. Having arrived on May 1st, a national holiday, the crowds were dense, the trains were packed, and the paths were overrun. Hiking gave way to fitfully walking slick paths; regularly giving way to accommodate aggressive oncoming crowds; and, pausing every few seconds to accommodate some selfie-mad photographer.

If I had wanted to be jammed onto a train, guard against pickpockets, and dodge selfie-sticks, I could have taken the subway from Brooklyn to Times Square at much less expense.

Photo is of Riomaggiore, one of the five Cinque Terre towns.

Thoughts on aging (denying it and admitting to it)

The problem with writing a book about aging – while aging – is that it makes aging worse. It keeps the process right in my face as I measure my debilities against those of the people around me. My knees were a constant reminder that I am aging, that walking is harder on the body than bicycling, and that degenerative arthritis is a self-fulfilling process/prophecy. Nowhere was that more clearly manifested than walking downhill on slippery and uneven terrain, even the “stairs” between the Cinque Terre towns of Corniglia and Vernazza. The grinding of femur on tibia seemed audible.

While the fitness buffs in our hiking group were comparing strides as recorded on their Fitbits or Apple watches, some of us were measuring our distances by the number of ibuprofens we ingested. By the end of the week, I was limiting myself to hikes that were flat or where I could hitch a ride on the downhill segments.

Then, trapped in the Uffizi (really)

I assumed things would improve on our arrival in Florence. Unfortunately the Uffizi Gallery taught me otherwise. Trying to get out of that place involved hundreds of steps down followed by a forced march through an endless gift shop. I am advised that if I claimed illness or advanced disability the staff would have taken me to a hidden bank of elevators but I guess that I would rather complain to you, dear reader, than admit to any real infirmity to some anonymous museum staffer.

Another variation on the theme of aging mindfully involves European hotel showers. Somewhere along the trip I noticed that unlike most American hotels, every European hotel shower stall included a medical alert system. Usually this was a long cord that was carefully folded and wound to hang high on the wall next to a red alarm/call button.

My first mindless reaction was to think, “That’s stupid, if a person fell in the shower, they could never reach the cord to call for help.” But, of course, I was really thinking about me and what would happen if I fell – a subconscious segue from noticing the slick shower stall floor, tired hiking legs, and the realization that my balance is not what it used to be to a search for a safety grip that ended with finding a call button.

Again, rather than untie the cord so that it hung near the shower stall’s floor, I simply denied the underlying anxiety (and the underlying reality) that I might need help and showered on.

Ah, the madness of denial, the weakness of fearing dependency.

Now, onto the development of a website to complement the book.

3 Responses to Up and Down in Liguria, Fueled by Ibuprofen