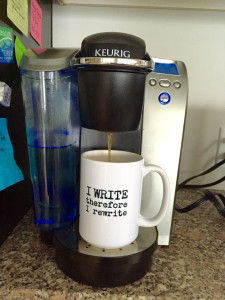 I am in an endless rewrite loop. My book coach, a potential book agent, and my wife (in her own right – a book coach, publisher, author, and editor) all give me conflicting advice based on reading snippets of the “Project.” (As it is yet to be published in any form, I get to refer to my book as a Project or a WIP, work-in-progress).

One wants me to expand on A and condense B. The next wants me to condense A and expand on B. My wife, unofficially invited to the party, blithely suggests that I chuck it all and start over. (Ha! This is a wee bit of an exaggeration. – Editor)

It feels like an endless rewrite loop, swooping back on itself like the infinite Möbius strip, which looks multi-dimensional but has only one surface and one edge. The only escape seems to be the circular firing squad model for a complete start-over.

Worse still, my advisors can all agree on two things. They do not like my use of “the passive voice” and they do not like my holier-than-thou, techno, scientific, pseudo-superior, hectoring, and repetitive doctor voice. I wonder if these are not related phenomena.

“Helloooo!!!” I respond. I have been a doctor for my entire adult life. I have sat quietly in my office listening to symptoms and unraveling medical problems. I have reassured the majority with minor problems and I have guided and comforted those with real problems.

My technical voice was that which allowed me to educate and comfort without being swept into the emotional vortex of the patient’s disease. Make no mistake, I had emotions, but they had to be kept at bay to give the best advice.

Furthermore, my Project is designed to educate my readers and I feel that each reader is my patient. It is not easy to advise patients on how to approach death-while-elderly without donning the “white coat” persona.

How does Gawande do it, I ask myself. Well, perusing Being Mortal offers me no easy answers. He raises many issues of healthcare system dysfunction and offers several examples of system improvements. But, with respect to individual patient decisions he is largely passive and tangential.

In his last chapter, beginning a lovely series of passages about his father’s last wishes, Gawande refers to the events of his father’s “penultimate afternoon.” I could never get that past my editors. “Unpack that,” I hear them say. “Just tell the reader that he had a soaking sweat the ‘day before he died’.”

My own father spoke his last full sentence four days before he succumbed. So, I guess I shouldn’t write, “On his pre-antepenultimate morning, Dad said…”

What is so offensive about the passive voice?

That brings me to the “passive voice.” The passive voice has been embraced by me. Why? What is so offensive about it to editors?

It can be beautiful (“Every valley shall be exalted, and every mountain and hill shall be made low”) and inspirational (“Never in the field of human conflict was so much owed by so many to so few”). Hey, sometimes I just happen to like the passive construction.

More importantly, when giving difficult medical advice it is sometimes easier on the doctor to speak tangentially, use a hypothetical patient, or blur the source of the advice with a passive voice.

I remember treating a famous Washington judge in January of 1993. He was so “busy” and “important” that at the request of his internist I met him for an elective colonoscopy on a Sunday morning. The nurse I called in to assist was furious with me.

Based on his colonoscopy and my review of his CT scans I advised him that he had advanced liver cancer. As I started to outline a plan for further diagnosis and treatment he interrupted me to ask, “What would you tell your father to do in this circumstance?”

Given the opportunity to use a hypothetical, I replied, “I would tell him to go home and put his affairs in order.” “Then that is what I shall do,” said the judge. I never saw him again. He died six weeks later.

That was a difficult conversation. It was made easier by using the “Father Test.” Writing a book that, in a nutshell, gives the reader the same advice is made easier by judicious use of the passive voice.

Gawande writes, “I never expected that among the most meaningful experiences I’d have as a doctor—and, really, as a human being—would come from helping others deal with what medicine cannot do as well as what it can. But it’s proved true, whether with a patient…, a friend…, or someone I loved as much as my father.”

I wonder if I could get that past my triumvirate. Gotta go. There is some rewriting to be done by me.

Photo credit: Writing mug is a prezzie to Sam from Debbie. xo