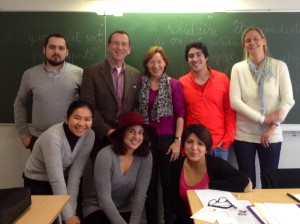 During my third week of classes at the Alliance Française we listened to rapid fire recordings of random French conversations and then attempted to transcribe what we heard. It was as if Barbara, mon prof, was familiar with my last blog post (I Will Never Be a Parisian) and wanted to help us “break the code.” Unfortunately, it almost broke my spirit.

My class and I were so not ready to transcribe conversations. We cannot even read the official transcriptions because spoken French drops so many syllables, contracts so many vowel/consonant combinations and eliminates so many parts of a negative verb formation that it looks like a different language.

Having struggled to recognize the written word and struggling to understand Barbara’s comparatively fulsome speech we were now being asked to understand random conversations of French 20-somethings discussing global warming using half the syllables and at ten times the tempo.

Let me elaborate on sensory overload

Debbie referred to the sensory overload of Paris. Let me elaborate on that.

When I walk around the average American city my eyes and ears know what to listen for and what to ignore. The sights and sounds are not only familiar but they have ingrained meanings. We know the sounds of trucks and cars and can judge their distance without looking. We know the meanings of traffic signs and billboards and can understand them without reading and translating.

In Paris, the traffic sounds different and follows unpredicitable patterns that require thought to analyze. Billboards, posters, traffic warnings require a moment for translation. Switching from English to French and back again is work for me.

Clothes bear brands and trademarks that have some familiarity but then prove to be “false friends” (a wonderful French expression is faux amis). “Redskins,” for example, appears on many shirts and sweaters in Paris. Trademarked in the U.S. for the Washington football team (and under scrutiny for political correctness) what does it mean when “Redskins University” appears on a young Parisian’s jacket? It burns my mental energy to analyze it.

A restaurant meal with friends can be pleasant but also exhausting. Over hearing English from one table and snippets of French from another gives me mental whiplash.

Why did I suggest that we torment ourselves in Paris? 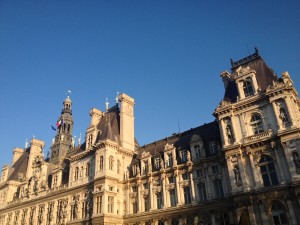 So why did I suggest that, as part of our Gap Year, Debbie and I live in a studio apartment in a congested city to torment ourselves over a language that we cannot conquer without total immersion?

The answer came to me in retrospect. As teenagers Debbie and I both had very positive experiences in France. I worked on a farm for six to eight weeks in a small town just south of Paris (Pithiviers) and deeply appreciated the family that hosted me and the culture they shared. Debbie attended a boarding school for a year in Chambon-sur-Lignon and enjoyed redefining herself away from her family in NYC. Thanks go to her parents, BTW, for having the vision to send their shy 14-year-old away from home and all the way to France.

Although we have visited Paris for a week here and a week there over the last 40 years we never recaptured those feelings of warmth and appreciation. Indeed, I felt as if France was slipping away. I felt my appreciation of France was being defined by negative interactions in brief excursions to Paris. Our five weeks of semi-immersion this trip, and our interactions at the Alliançe Française have allowed me to recapture what I had lost and finally realize a few certainties.

I clearly do not have the gift for a foreign language and the harder I try the more exhausting it becomes. We will soldier on however. I will not let that failure bother me further.

There is always the language of medicine

Perhaps I have other “language skills.” I think with pride of my daughter. She is learning another “language,” the mental and physical skills of the surgeon. I think that should satisfy me.

We will always have Paris and Pithiviers and Chambon-sur-Lignon.

Top photo: Sam and his classmates at the Alliançe Française. He is in the middle next to his professor, Barbara, in scarf.

Middle photo: the Hôtel de Ville near our apartment in Paris – sunny day!

View all posts by Sam Harrington →
Why Does France Turn a Blind Eye to Smoking?
Sam’s Three Words for 2014