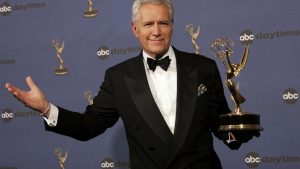 I can admire celebrities who are willing to be open about their illnesses because it brings important discussions to the fore and offers multiple teaching opportunities. But we need to change the discussion involving advanced cancer from the usual plan to beat the illness to something more nuanced.

The most recent example of this is Alex Trebek, the emcee of the wildly popular and long-running game show, Jeopardy! Although I was saddened to hear that he was diagnosed with stage IV pancreatic cancer, I was pleased to hear of his upbeat approach and to view his general good physical appearance. I interpret this to mean that he can find some good quality time if he does not waste it in hospitals and clinics seeking an unlikely cure. But I fear most other observers won’t share my view.

The media feeds a go-for-broke attitude

Most others will applaud his go-for-broke attitude. But this is where a celebrity’s bully pulpit gets misused. Because his personal goal is to “beat the low survival rate statistics for this disease,” and, by assuring the audience that with their help he will “win,” the media’s repetition of his aspirations without modification makes his success appear inevitable.

Now there is evidence that optimists tolerate toxic treatments better than pessimists, but there is no evidence that they live longer. So the likelihood is that he will suffer treatments without practical benefit.

An opportunity for a teaching moment

By going public with his troubles he has an opportunity to offer a teaching moment. If he dies from the disease he will be hailed for his bravery and his public’s eyes will be collectively opened. But if he survives as he predicts, without describing the trials and challenges of his treatments, he will only serve to mislead observers.
Worse yet, if he is “cured” against all odds, without sharing his ordeal, he will inspire thousands to follow in his footsteps when they would be better served by palliative care.

The MD Anderson nomogram for stage III pancreatic cancer (indeed, they don’t include a prediction for stage IV illness) predicts a 1-2 percent survival at 36 months for a 78 year-old male. So, although he has vowed to “beat” his illness (a cancer cure is defined as living five more years), the likelihood of such success is exceedingly slim. Although I wish him well, I am distressed that news reports did not emphasize the reality of his situation.

For 78-year-old patients, the median is, in fact, the message. That’s because the longest living survivors will always be those who start with the advantage of youth and a robust physiognomy.

And don’t let posturing politicians, misleading advertisements, and hyperbolic health care hacks fool you into undergoing painful treatments because of the promise of improving results. Between 2002 and 2014, the FDA approved 72 new medications for the treatment of various cancers. Each one claimed to be part of breakthrough technologies and each one is associated with extraordinary cost. But if we compare the average gains for progression free survival and overall survival of these new treatments with the standard results, the miraculous benefits prove to be an increase of only 2.5 and 2.1 months respectively. This hardly represents curative treatments.

We must balance our optimism with reality. We must not allow aspirations to become assumptions. We must emphasize that for every one or two patients who undergoes aggressive chemotherapy and lives 36 months with stage IV pancreatic cancer, there are 98 or 99 who did not. And of those, some died prematurely because of treatment complications, many suffered debilitating side effects, and all spent time in treatment centers that might more happily have been spent elsewhere with friends and family.

Were these good days wasted or bad days gained? Well, that is the proverbial conundrum of our perspective on what a half a glass of anything represents.

Have a backup plan for palliative care

If I were 78 years old and diagnosed with an advanced cancer I would assess my overall health, including the presence of other illness and my ability to care for myself. If I suffered from another non-cancerous chronic illness and if I were frail, I would strongly consider seeking a palliative care consultation and foregoing aggressive treatments. Because I know that whatever number of “good days” were allotted to me, by undergoing aggressive treatments, I would immediately start wasting them in hospitals and clinics or at home with side effects. And, I would be guaranteed to suffer without a significant likelihood of practical, measurable benefit.

If I were as robust and independent as Alex Trebek appears to be, I would proceed with treatments cautiously. With my physician, I would study my disease trajectory, monitor my progress, review my advance directives with my family and friends, and I would establish a back-up plan for palliative care followed by hospice care if I became debilitated by side effects or complications.

Finally, we must urge the media to reinforce the reality of current treatments and to ignore overly optimistic information designed to be confused with fact, leading to over-expectation on the part of patients and over treatment, indeed futile treatment, by physicians.

Unintended Consequences of Expensive Cancer Therapeutics: The Pursuit of Marginal Indications and a Me·Too Mentality That Stifles Innovation and Creativity

4 Responses to When Celebrities Vow to Beat Their Cancer