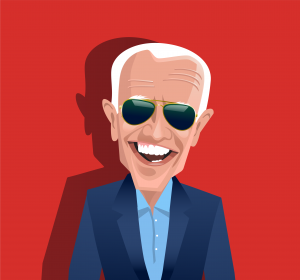 Can responsible Democrats allow the nomination of an 82-year-old candidate? I say, no.

One of the medical take-home lessons that a long-term physician absorbs regarding disease and death is that, like the fundamental principle of entropy, on average, the most likely thing is going to happen. People are going to age, weaken, and die. The older one is, the faster the decline from weakness to death.

The Legacy of RBG

One of my granddaughters, Ruth Alice, is a great fan of the former Justice Ruth Bader Ginsburg. It is not just a shared first name. It is a common embrace of life and purpose. My granddaughter wears RBG tee shirts. She dresses up as RBG for Halloween, and RBG is her favorite topic for essays and oral presentations at school. Of course, my granddaughter views the legal icon and her legacy as a pioneer of human rights in the U.S. legal system, particularly as viewed through the lens of women’s rights. And for this inspiration to my grandchild, I thank the Justice.

But I see the legacy of RBG to be that of Amy Coney Barrett and the decades of votes that Justice Barrett will make dismantling progressive human rights accomplishments. This legacy is the result of Justice Ginsburg’s hubris.

She died at age 87 and was 82 in 2014 when Obama’s White House tried to suggest that she step down. To be fair, she almost certainly assumed that Hillary Clinton would beat Trump. But politics, unlike disease, does not follow the laws of physics and disease. She never made the critical calculation that if Trump won, she would almost certainly not survive his term or terms.

It appears she believed, at age 82, that she could beat not only colon cancer but also pancreatic cancer. That was magical thinking. It was a form of chutzpa (although I know that sounds harsh).

Did she also believe at age 82 that her mental capacity was such that she, and only she, could continue to contribute to the work of the Supreme Court, and that no younger, more energetic legal scholar was qualified to replace her? Apparently, because we have no satisfying explanations for her resistance to requests to step down.

Were her doctors unwilling to share with her the seriousness of her disease and its prognosis? Or did she not listen if they did. Did they not explain to her that her frailty, something we could all see from afar, was an additional risk factor for disease and disability? Yes, in her public outings her mentation was remarkably nimble for an octogenarian, but that is a much lower bar than what we expect of an accomplished quinquagenarian.

In my practice I had many accomplished patients that I followed for thirty years. I cannot think of one that was as mentally nimble when I retired as when I first met them.

The Compression of Morbidity 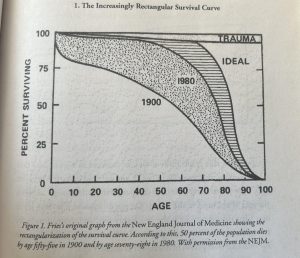 A diagram showing the compression of morbidity on page 31 in my book, AT PEACE. Courtesy of the New England Journal of Medicine.

There is a concept in gerontology called the compression of morbidity. This is the idea that as we age in the current era of modern medicine, when leading longer and healthier lives than those of the Victorian era, for example, the time between the onset of illness and the occurrence of death is foreshortened.

There is some truth to this because with the advent of modern medicine, in particular antibiotics, vaccines, and surgical advances, we are living more healthy lives during our middle years. In that sense seventy is the new fifty.

You’ve heard this from me before: seventy is the new fifty but 86 is the new 85 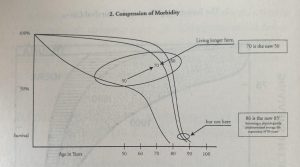 Illustration of why 86 is the new 85 on page 32 of AT PEACE. Sketch by my daughter, Eliza Myers MD.

Contrary to what is bandied about, we as a population are not really living longer so much as being generally healthier until illness strikes. Among responsible gerontologists, as compared with wide eyed optimists, there is the understanding that even under optimal social circumstances there is a limit to average human life expectancy, and under optimal circumstances that physiologic limit is centered – again, I emphasize, on average – around the age of 86. Some of us will beat the average, but many of us won’t, and if we elect a president at age 82, we are toying with that natural limit. We are approaching the limit of a physical fact and the edge of a political precipice.

According to the government’s own actuarial tables, if an 82-year-old man is elected to the office of the presidency, there is a 29 percent chance he will not fulfill his term because of death. I do not know how to calculate the chance of a disqualifying disability during that same time frame, but I would guess that it is a similar figure. To be conservative, let’s cut that in half and say a disqualifying disability would affect 15 percent of people over that four-year period.

That means a roughly 45 percent chance that Biden could not finish his term if re-elected in 2024. And that is not to mention the inevitable mental decline that occurs between the ages of 82 and 86. Maybe he takes Prevagen (whose active ingredient is found in jellyfish), and who is not impressed by the mental gymnastics of the paid performers in those Prevagen commercials? Not me.

By contrast, if a 58-year-old female were to take office in 2024, one Kamala Harris for example, that person would have a 97 percent chance of surviving their first term and, similarly, a much lower chance of a disabling illness.

What Can We See When We Observe Our Current President?

Joe Biden has run for the presidency on many occasions. I met him at a soiree at my in-laws’ home during his bid in 1988 (or 1992). A much younger man, he gave a smooth stump speech (no need to attribute verbal tics to overcoming childhood stammering) and answered questions with facility. He projected knowledge and experience. In fact, he never stopped talking.

Now I see a man with a hair transplant, a Botoxed forehead, a facelift, evidence of Parkinsonian changes, a shortened stride length, diminished vigor that he tries to hide by hurrying to each and every podium, and strangled speech. I am sorry to sound petty, but it is worth calling out these attempts to project youth where it is not.  It is also worth noting these cosmetic changes because they indicate his awareness that age is working against him and his attempts to hide it.

I do not see any major decline in Biden’s mental competence, and I know that he is surrounded by a vast team of advisors and assistants so that his decisions are not made in a vacuum. So, I do not worry about that now. Those of us who lived through the Reagan years know that mild dementia need not stand in the way of a successful presidency.

I don’t know much about politics

I don’t know much about politics, but I did practice medicine for more than thirty years with a gerontologist’s eye toward the human condition.

I have also experienced enough political upheaval (the war in Vietnam, Kennedy’s assassination, MLK’s assassination, Watergate, Reagan’s attempted assassination, Clinton’s impeachment, the attempted dismantling of democracy by Trump and his Republican associates) to think that that putting forward a candidate who barely has an even chance to finish a four-year term is not a recipe for success in the election or stability in office.

Joe Biden can project empathy and democratic values with the best of us, but he can no longer project personal power and mental flexibility. As he physically declines over the next few years, that problem will worsen.

Joe Biden has been a good public servant, overall. He has served the country for over 50 years, although, like all successful politicians, he has been handsomely rewarded for that “service” in terms of power, prestige, perks, and profit. I do not begrudge him that, but like most successful politicians (and most Supreme Court Justices) he seems disinclined to give it up. I do worry about that.

With his political and emotional stability, Vice-President Biden was the right person to stand up to Donald Trump. But at age 82, with visible evidence of a neuro-degenerative disorder, he is not the right candidate to stand up to any Republican opponent, even Trump at age 78 (minimum chance of death greater than 22 percent between 2024 and 2028 – more the pity, though I try not to wish harm on anyone.)

It has been said that the only cure for Presidential Fever is embalming fluid, but let’s not nominate someone where that treatment is so likely to be infused.

Perhaps the legacy of RBG will be that Biden sees the light and steps aside. I hope so.