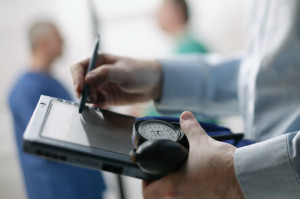 I was leafing through the April 2014 edition of The Atlantic when I came across an interview with David Blumenthal by James Fallows on the subject of EMRs (electronic medical records). I perked up because here were two brilliant men (Jim is also a friend) discussing one of my pet peeves.

Dr. David Blumenthal, a former professor at Harvard Medical School, was the National Coordinator for Health Information Technology from 2009-2011.

The interview correctly identifies that practitioners have been slow to adapt the technology because of an ”asymmetry of benefits.” From the patient’s perspective the doctor has more information (which is probably reliable) sooner. From the doctor’s perspective the EMR is costly to set up and frustrating to use.

More technology is not necessarily better

However, the interview sidesteps discussion of some egregious problems with EMRs. It generally feeds the assumption that more technology is better. It mistakenly states that EMRs make you “a better physician, a better nurse, a better manager when you have the digital data at your fingertips.” And it alludes to how it improves a system when it is internalized into that system – like the VA or Kaiser – but does not state what the important conclusion is that one should draw from this benefit of internalization.

Here are some of the egregious problems:

For the honest physician, the EMR loses money by decreasing productivity. The doctor must spend more time entering and then double checking and correcting data for each patient visit. For the less ethical physician, adding pre-populated data with the push of a button can been used to upcode a visit and to generate a higher charge. This also creates unnecessary data for subsequent physicians to sort through.

When multiple health care providers access a patient’s record they can create uncompensated work for others. Even more work than the endless feedback loops of emails we are familiar with in the average workplace.

For example, a physical therapist or pharmacist might make an adjustment in a treatment program that has to be “signed off” on by the primary care physician. Or, an orthopedic surgeon might prescribe a medication for a complicated medical patient and rather than reviewing the medication list and its interactions make the prescription available only after review by the PCP (primary care physician). This makes the PCP spend the time reviewing and then taking responsibility for the prescription without compensation.

The complexity of these systems creates unintended expenses. The use of scribes in ERs and ICUs is an added expense to keep patient care flowing in these fast-paced arenas. An extra nurse or tech in the OR or endoscopy suite is commonly needed for EMR data entry while the real nurse or anesthesiologist cares for the patient.

I have heard from two sources a rumor about the Maine Medical Center. It is surprising. The sources were independent and presented the information spontaneously. They maintain that the MMC, which was in the forefront of technology and has had an EMR since the 1980s, switched to a newer version of EPIC (the most widely used EMR system in the U.S.) about six years ago. The center has lost money every year since then because of decreased productivity.

More technology is not automatically better, as the previous paragraphs point out. More information and faster information, especially when the quality is not guaranteed, do not make one a better doctor or nurse. Having more information may, indeed, help a manager code more accurately or prevent duplication of services. But the quality of one’s professional care depends on what one does with whatever tools are at hand.

The conclusion one should draw from the benefits of an internalized” system is that we need one system – not overlapping competing systems.

If the VA, Kaiser, Geisinger, and Group Health Cooperative of Puget Sound live within a budget and benefit from the efficiencies and quality of an internalized system, then the only logical extrapolation for improving quality and containing cost across the country is a single computerized system. The French system, which includes a medical ID card containing the personal medical record of every patient, is the ultimate example of the benefits of internalization.

Finally, it is time for the important thinkers in health care to stop being coy about “market forces.” This interview is comparatively passive on the subject of markets, and Blumenthal “is not advocating pure market competition in health care,” but it does include the following highlighted side bar:

“If the medical market functioned like the car industry… providers would have adopted electronic medical records a long time ago.”

This leaves the impression that free market forces can have a positive influence.

Well, the medical market is not, and never will be, like the car market. Encouraging the treatment of health care as a free market is an experiment that has failed. It has created our excessively commercialized, dysfunctional and unsustainable system.

Let’s ask the big thinkers to stand up and hammer home this point to the policy makers and the American voter. We spend twice as much money as any other developed country and we have worse outcomes than most of the developed countries.

Medicare for all, anyone? It’s beginning to sound right to me.

One Response to Why Electronic Medical Records Are Not the Cure