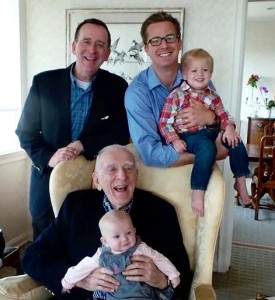 The family, his four children and their spouses as well as seven of his 13 grandchildren, convened in Milwaukee to bury him.

Dozens of friends, neighbors, and former law partners assembled for an afternoon wake. Others called. Not a critical word was used to describe him and in general he was talked about with uncommonly high praise.

The worst that was said about him, in the privacy of the family, was that he occasionally drank too much, as did others of his generation. This could be said about many of us. His alcohol consumption withered with his advancing years.

The alcohol did not change his fundamental personality. It soothed some inner demons, took the edge off of long-term anxieties and, at worst, made him only slightly more remote than when sober. Only my mother would have suffered the consequences and they remained faithful and inseparable to the end.

Dad was not a saint but, to my uncertain knowledge, he never sinned.

He was described as elegant, humorous, intelligent, gentle, polite, thoughtful, considerate and gentlemanly.

He was all of those things. In addition he was principled, conservative, reserved (occasionally distant) and tough, right up to the end.

He was rarely critical, however. He was never harshly critical and never repetitively critical. He observed the world through the eyes of his highly admired champion of principle, Lord Melbourne.

One of his favorite Melbourne quotes: “Neither man nor woman can be worth anything until they have discovered that they are fools… The sooner the discovery is made the better, as there is more time and power for taking advantage of it.”

He was our family’s hero, his foibles forgiven and his strengths cherished.

He is one reason for the hiatus on our blog.

Here are some others.

After a 15-month Gap Year none of my potential job plans or possibilities has been realized. Admittedly, enjoying my freedom and free time sapped the energy and focus I needed for a real job search. But I kept telling myself that if something fell into my lap, then I would consider it.

Of course, I wanted a job that was lucrative, fascinating, part-time, and free of responsibility. Unfortunately, a job of that description is hard to find. Clearly I was being foolish and naive.

But I was discovering a new kind of work.

On becoming a writer

One of the projects that I began working on intermittently during our Gap Year was a book about end-of-life issues. My particular spin is to discuss practical issues and decision-making that will help people who are approaching the end of life to avoid a medicalized death.

It is not enough to simply have the “hard conversation” about how you want to die. It is necessary to put a number of plans in place and to surround yourself with trained family, friends and personnel.

I made only modest progress on this project. I spent many weeks visiting with my father over the past two years; he represented a psychological and physical barrier to my writing.

Psychologically, his lifelong emphasis on having a “job” continued to resonate with me. If, as a child, I had said to him, “Dad, when I grow up I want to be a writer,” he would have responded, “That’s wonderful, Sam, but you can’t be both.” I.e. a writer and an adult. He knew a thousand ways to deliver that message.

Ultimately, he blessed my writing project (he was an avid reader of this blog). Yet even as a post-Gap Year adult it was hard for me to hear his support.

Physically, he refused to die. And, until he did die an un-medicalized death, I found myself paralyzed by writer’s block. His slow decline had me emotionally muted. I hated witnessing his progressive physical frailty. Beyond that, if some catastrophe had occurred and he had needed hospitalization for an unforeseeable problem, I would have had to refine our carefully-outlined plan.

My Gap Year ended in November 2014 and because of my father’s final decline and my own paralysis, I have been treading water until now. We have traveled and I have spent some glorious time with each of my grandchildren (on both West and East coasts). Like Debbie, I felt the dislocation of moving around. It was not, generally, a productive five months.

Finally he did die peacefully. So I am ready to proceed with my book.  I have close to 100 pages of a very rough draft written.

View all posts by Sam Harrington →
Why Our Blog Has Been on Hiatus (Debbie)
Two-Year Report on Sam’s Work-in-progress: His Book on “A Better Death”

6 Responses to Why Our Blog Has Been on Hiatus (Sam)