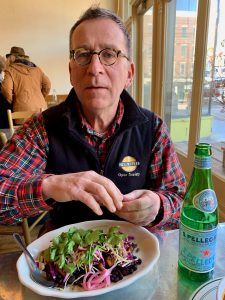 “Even eating lots of vegetables won’t make me live forever.” At the famous Chase’s Daily in Belfast, ME.

It seems that 2018 was my year to discuss immortality with a host of people – and if not immortality, the expectation of living to be 120 years old. The issues came up in routine conversations and in my multiple book talks, Q&As, and interviews for radio and podcasts. I doubt if 2019 will be much different.

Of course, it was also the year of fake news, baseless Big Pharma price increases, the Theranos deception exposure, and the non-crisis border crisis.

Given all these falsehoods, why does the possibility of immortality seem so palpable?

Because, we, the Baby Boomer generation, have lost our critical thinking ability. We are the first “screen” generation – weaned on television, spoon-fed on mass media marketing, and force-fed by social media distortions. We are the first, unwitting, generation of screen time sacrificial lambs.

We have been assured that we are winning the War On Cancer (see immunotherapy and personal cancer treatments); that dementia is manageable thanks to a protein first found in jellyfish (see Prevagen and note the multiple lawsuits alleging fraud, aimed at its producer); that cardiovascular disease, diabetes, neurodegenerative disorders, and senescence are soon to be cured (see gene therapy and research on slowing but not halting senescence); and that artificial intelligence will compensate for any fault lines in the preceding success stories. And who would have thought that a jellyfish protein would sell?

We are passive grads of the University of Repetition

We are the victims of one of the most basic techniques of successful propaganda machines, repetition and redundancy. Listening to politicians, advertisers, and PR machines manipulate broadcast, print, and digital media, members of our generation have become passive graduates of the University of Repetition University – many of us with advance degrees.

We look at the conflations of the Silicon Valley giants – their work on artificial intelligence and their musings on “the problem of aging” – and we think, “Well, they have done so much, perhaps they will, indeed, solve the problem of aging.”

If aging were a problem, it would have been solved

But this is not realistic in any way. If aging were a problem, it would have been solved eons ago. From an evolutionary point of view, aging and dying are the solution.

The operational goal in life, not just human life but all forms of life, is perpetuation – the passage of genes from one generation to the next. This not only promotes perpetuation of the species but it promotes variation and adaptation (the irreducible essence of evolutionary biology) to create a diversity of species and within species that further enhances the perpetuation of life.

For if one life form (let’s hypothesize a simple form like slime mold) successfully reproduces and simultaneously solves the problem of aging, i.e. it is able to live forever, it has the potential to crowd out other life forms and consume all of the earth’s resources, to the detriment of all other life forms and, ultimately, itself.

Wait a minute, isn’t that what humans are doing now – even without the benefit of infinite life?

But we don’t want to die…

So why do we even consider the possibility that human life can be extended indefinitely? Because we don’t want to die and that makes us susceptible to fabulist marketers.

Although the promise of perpetual life has always been part of the human experience, until the current era it was largely limited to a spiritual promise – see Heaven (Christianity and Islam), The World To Come (Judaism), reincarnation (Hinduism and animism), and necromancy (see clairvoyancy).

With the age of exploration and the discovery of new horizons, perpetual life on earth was considered (see Ponce de Leon and the Fountain of Youth) and this is now enjoying a renaissance in the generally fraudulent, and inexplicably successful, marketing of “wellness.”

Currently, in the age of information technology, mass marketing of medical advances, and false news, the baby boomer generation is meeting and greeting the development of artificial intelligence as a panacea for aging and senescence. And a few of the super rich are even getting ready to survive a doomsday scenario in order to extend their lives..

However, all the best science shows a definite ceiling to a maximum human life span (there is no evidence that anyone has lived to be older than 122 – ever, and that demographic is limited to a single French woman). It also suggests that under optimal sociological circumstances, the maximum “average” live expectancy hovers somewhere between 85 and 90 years of age. And finally, despite all our scientific progress, gains in life expectancy have plateaued. In the U.S., between 1900 and 1950, the average life expectancy increased from 47 to 68; between 1950 and 2000, it increased from 68 to 77; and, the latest data shows no change through 2014 (although 2015 and 2016 have shown a decline, courtesy of the opiate epidemic – p.s. the opioid epidemic is another marketing success, double courtesy of the Sackler family and Purdue Pharma).

And why would one actually want a permanent, terrestrial existence? Have you ever met a person who is 115? Have you seen photos? All human life should be valued but not every human existence is desirable.

My oldest patient died at the age of 107: he was patronized as a cute oddity

My oldest patient died at the age of 107. His brothers lived to be 102 and 109 respectively. They were “blessed” with “good” genes. Yet I did not envy my patient.
Despite his generally good mental capacity, people patronized him as a cute oddity, a freak show performer. And when I consulted with his 85-year-old son about how aggressive to be with his father’s frustratingly recurrent and urgent gastrointestinal condition (sigmoid volvulus – a bowel that, by twisting on itself, obstructs itself), I sensed that he was not looking forward to the decades of dependence that appeared to be his father’s legacy.

So let’s not succumb to unrealistic promises about indefinitely postponing death. Let’s focus on the reality of our brief existence and more realistically deal with the dying process (see AT PEACE).

What Will Our Society Look Like When Artificial Intelligence Is Everywhere? (Smithsonian April 2018)

Editing by Debbie to research and add the links.