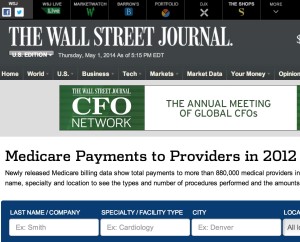 I have been working with various free portals to access the newly available data on Medicare payments to providers. I would like to pass along what I have learned. Then I would like to comment on how you, the above average consumer (like the children of Lake Woebegone, all our readers are above average), can interpret the particulars of a given physician. I will illustrate this piece with real life examples of fraud, abuse and heroism… not.

This stuff gets complicated and a little dry. If you do not want to get down into the weeds of practice patterns, simply read the next paragraph and then skip to the last paragraph.

Use the Wall Street Journal site to compare physicians

Having looked at the official Centers for Medicare and Medicaid Services (CMS) website (too much information and impossible for me to navigate), the New York Times “interactive graphic” (embedded in an article and characterized by an uninterpretable order of services), I am recommending the Wall Street Journal Medicare Payments site as the most useful to date.

I compared my own medicare reimbursement profile with three other GI docs in D.C.

Comparing my reimbursement profile to three other comparable gastroenterologists both across the WSJ site and the NYT interactive graphic, I have a few comments.

First, the NYT has a casual attitude toward reporting comparable services. It reports 15 services per physician that are not exclusively the most highly reimbursed nor are they the same across different physician practices. For example, I billed 65 patients for a stool occult blood test. Two of the four gastroenterologists had no record of performing this routine service. This poses the question, what else is missing and is evidence of missing data.

Second, noting what a physician charges a Medicare patient is useful only to differentiate “participating” versus “non-participating” providers. Medicare reimburses according to its own fee schedule and that is unrelated to what the provider charges. Therefore this data does little to aid in the study of a practice pattern. Finally, the NYT prints out one page of data with five pages of NYT treacle.

On the other hand, the WSJ supplies the top ten services (and sometimes with their actual numerical codes) for each physician. For responsible physicians these services are generally the same across different practitioners profiles and the numerical codes guarantee apple-to-apple comparisons. Finally, one page of data prints out with “only” three pages of treacle.

Because the four gastroenterologists I selected are responsible practitioners I can draw no important conclusions to distinguish one set of practice data to another. Later I will compare some practices that have larger discrepancies.

Of the top ten Medicare “earners,” we learn that there are ten different stories to be told but fewer patterns to be interpreted.

One pattern is that of the solo practitioners with their hands in the till such as Salomon Melgen ($20.0M in Medicare reimbursements) and Asad Qamar ($18M in reimbursements). These outliers are being investigated for fraud and others with similar practices should be similarly investigated.

These practices are physical violations of another person’s body

Keep in mind that this is not just a financial crime. Medical complications from their excessive practices will also have occurred. These complications are physical violations of another person’s body. To limit prosecution only to the financial aspects of these unethical practices would be like dropping associated murder charges against a bank robber who killed a teller but is willing to give back the money and pay a fine.

Patterns you CAN look for: group practices with single I.D. numbers, passing through drug costs, etc.

Another pattern is that of group practices filing claims under a single physician I.D. number. These can be salaried physicians like Franklin Cockerill ($11M), the head of the Mayo Clinic lab, under whose name and I.D. number all services are filed or Jean Malouin ($7.6M), a Family Practitioner leading an academic project under which all claims are filed using her I.D. number.

These are unlikely to result in fraudulent reimbursements. However, if a profit making organization is filing all its claims under a single number the consumer should be aware of two things. Practice patterns of individual physicians are hidden by the corporate coverage. This includes the obfuscation of potential malpractice claims and obscures the possibility of excessive tests or procedures because the physicians’ compensation includes an incentive program.

And, there is the occasional solo practitioner, toiling away in the wilderness, having to do the high cost work of many because there is no competition

Finally, there are the physicians who charge both a professional fee and a facility fee for procedures. Their Medicare reimbursements are recorded in two places

Back to four D.C. gastroenterologists and how to look at their practices

This is what does distinguish the four gastroenterologists that I selected. The two of them (myself and my former partner) performed their procedures in the hospital so that the hospital collected the room charge. The other two performed their procedures in a private, self-owned, ambulatory surgery center. They collected Medicare reimbursement for their professional services but their limited liability company collected a large reimbursement for the room charge. That is recorded under a separate ID number and not reflected in the personal data reviewed above. This is another example of the incomplete nature of the data.

So how do you figure out how much a physician is billing Medicare?

A consumer must consider all the possible revenue streams before concluding how much a physician is billing Medicare. For example, an energetic gastroenterologist (or other proceduralist) might have multiple limited liability companies billing Medicare for different services related to a colonoscopy. In addition to the physician’s personal I.D. number there might be an LLC for the room fee (as outlined above), an anesthesia fee and a lab/pathology fee. It is worth considering and inquiring about.

What to look for: “comparables”

So what can people compare? Well, “comparables” is the answer. In my years of leadership at my former hospital I participated in the removal of several physicians from the medical staff and I reviewed many peer review problems. Practice patterns that bend the rules but don’t break them are easy to see but hard to police.

For example, one enterprising cardiologist on our staff seemed to be consulted regularly to see patients admitted by a hospitalist for non-cardiac diagnoses. The patients then had several cardiac tests of dubious necessity for the admitting diagnosis. He billed for 1,900 hospital visits in 2012 compared to the average of 200 for the more responsible and selective cardiologist. The over-utilizer also performed more echocardiograms than any other cardiologist both in terms of revenue ($200k vs $100k) and frequency (echos per patient visit).

When comparing internists it is worth looking at their average visit charges. Medicare pays according to a formula that considers severity of illness, complexity of co-morbid conditions and the time spent with a patient. Medicare supplies multiple definitions of each factor but ultimately the physician makes the calculation of physician charges according to the level of work supplied. The more work that is done means a higher charge.

If a physician “upcodes” and charges more than average it will show on these reports. One hospitalist, well known to me for shoddy practice habits and substandard medical care and who was eventually dismissed from the staff for an accumulation of problems, has an average Initial Hospital Care reimbursement of $150.70. Another hospitalist charged at a level to receive only $108.53 per patient for the same service. One can conclude that the former was an unrepentant “Upcoder.”

Here is the last paragraph: Harrington’s Rule of Three

Again, there are many errors of omission and commission in the WSJ (and the NYT) that call into question the ability to draw truly nuanced conclusions about any given physician or practice. But by comparing the profiles of several similar physicians it is possible to detect deviations and any deviation is fair game for questions and explanations.

Finally, I would promote Harrington’s Rule of Three for Deviation. All active physicians work hard. It is conceivable that a given physician can charge twice the average for overall charges or highly reimbursable charges simply by working day and night. However, there is no justification for charges that approach three (or more) times the average. In this case the doctor is probably gaming the system and you should seek care elsewhere.

View all posts by Sam Harrington →
Poetry and Shopping in Ellsworth on a Rainy Saturday
What Is “Fair” When It Comes to Healthcare?