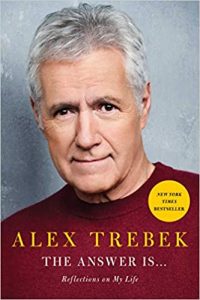 {Update from Sam} On November 8, 2020, Alex Trebek, the long-time host of the unwaveringly popular game show Jeopardy, died of pancreatic cancer. It was twenty months and two days after his public announcement of the diagnosis of advanced (Stage IV) cancer and his “plan to beat it.”

What have we learned?

Well, my initial response to his announcement was that this was a disaster in the making. Here he was, leading his flock (some of whom had similarly advanced cancers and others of whom would contract such a diagnosis) into the jaws of aggressive American treatment paradigms.

My baseline fear was that many patients would be tempted to seek minimally effective treatments based on his example. My greatest fear was that through some misplaced serendipity he would, indeed “beat the odds” and, living well beyond any reasonable expectation, use his massive, fan-based, megaphone to inspire his followers to seek treatments beyond all hope – not understanding that false hope leads to futile treatments and that futile treatments are physically cruel and morally wrong – because most people don’t beat the odds.

The good news? I was wrong in my initial assessment and pleased by his balanced behavior.

So what are the odds? One year after his diagnosis, Mr. Trebek stated that the chances of his surviving twelve months was eighteen percent, although the M.D. Anderson Pancreatic Cancer Survival Calculator quotes between six to eight percent. By any measure, his treatments were a success. However, using his figures, we have to keep in mind that of the 137 patients who started treatment on the same day he did (50,000/year divided by 365 days/year = 137 patients per day), only 23 were alive to see his announcement. And, my guess is, few of those who saw the announcement were as robust as he was when he delivered it.

We must also keep in mind that during the same 20-month period, 114 patients died. At some point their treatments became ineffective, indeed futile – no longer serving to prolong their life and most likely reducing their quality of life. Some of them chose to die fighting and others chose to let go. Both perspectives are equally valid.

His special circumstances (happily married, financially well off, religiously faithful, in a rewarding celebrity/fan relationship with millions of followers, and with a tolerable quality of life until the very end) both prompted him to soldier on and rewarded him for doing so. But we cannot will our place on the survival curve.

Mr. Trebek, universally regarded as a good, kind, and generous person, survived long enough to claim that he had beaten the odds and his continued appearances on Jeopardy inspired many to value the benefits of soldiering on. But his regular updates for the public included reality checks about the physical and emotional cost of his treatments. This served to temper blind submission to aggressive treatments.

Perhaps the special gift (a daily dose of comfort, sanity, and mental exertion) that he brought to millions supplied the good karma to counteract the bad luck of his initial diagnosis. But the majority of oncology nurses have opined that the nice cancer patients die sooner than the mean ones – so in this regard, too, he was an outlier.

Let us agree that Alex Trebek fought a good fight. He did not mislead. He achieved what he wanted. He led by example. He accepted his fate.

And let us agree that his legacy will be determined by his exemplary behavior, not his place on the survival curve.

When Celebrities Vow to Beat Their Cancer by Sam Harrington (March 22, 2019)

View all posts by Sam Harrington →
COVID Management Catastrophe: the End of an Error
It’s Time to Take to the Streets: The Green New Deal could save the planet for our grandchildren