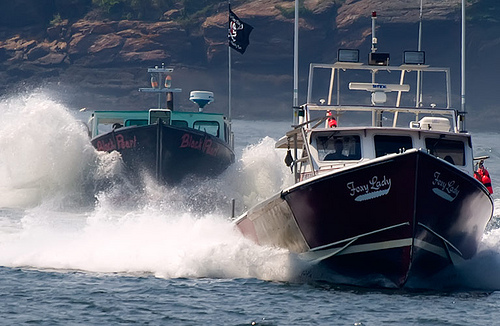 It’s 0530h. West Penobscot Bay is throbbing with the sound of diesel motors, thousands of horsepower under the decks of hundreds of lobster boats. The sun has been up for twenty minutes. By now, many of the lobstermen have been hauling traps for two hours.

I have an appointment to take the gasman to the island to fix the stove’s thermostat. [Ed note: it is wildly out of whack, resulting in charred brownies and other disasters. – Debbie] He better bring the right fittings; it’s a long way back to his truck on the mainland. He is taciturn and a man of few words even when pushed into conversation.

Such behavior is more common in the big cities which, in my experience, means New York or DC. How it leads to success is what I do not understand. Bombast leads to lack of communication and poor communication leads to failure. Yet, SABBs survive.

Let me further define this SABB syndrome. I do not mean an ignoramus. I do not mean someone who is simply verbose and pompous. I mean a person who dominates a conversation, finds themselves on the wrong side of the facts and then is unable to accept that. Finally, by the end of the exchange, they are still trying to convince me they are right; i.e. that black is white. Or, they may use a technicality to change their position while never acknowledging that they were wrong.

They not only survive, they thrive in the world of business and politics. There is an old expression, “Close only counts in horse shoes and hand grenades.” But it must be good enough in a lot of business dealings to make money. “Close” does not count in medicine. In medicine you have to get it right.

SABBs in the operating room

Of course bombastic bluffers do exist in medical practice. They are frequently marginalized, but not always. If I was asked to see a patient by a newly-acquainted physician and I found the doctor overbearing, I would finish my consult and treatment plan and that would be the last elective consult I accepted from them.

More importantly, the SABB personality is frequently associated with or confused with the surgical personality. “Frequently wrong but never in doubt” is an old saw applied to surgeons. In fact, surgeons may never be in doubt but a good surgeon is well trained and rarely wrong. They have to make hundreds of intraoperative decisions that both the patient and the physician must live with forever.

When the SABB-like personality appears in the operating room or on the wards it plays out as a physician dressing down a subordinate physician or a nurse. This used to be considered a part of the natural order of things in a hospital. “The doctor is always right.” Things have to be done their way. But as patient safety studies gained traction in the ‘80s and ‘90s it became apparent that these abusive physicians were, in fact, responsible for treatment errors and because of their poor communication skills were associated with a disproportionate percentage of the malpractice cases.

The euphemism applied to this  kind of behavior is “disruptive physician” and it is equally represented among male and female physicians. Medical staff leaders monitor such behavior at the peer review level and correct it or rescind privileges. The less obvious cases are hard to define and lead to lots of friction among the medical staff. Because of the important association of this disruptive behavior with medical mistakes, it must be eliminated.

Why is SABB behavior tolerated?

Does this happen in the corporate boardroom? I do not know personally but I am confident that it does. The threshold for culling someone from the organization, however, would be quite different. If they produce, if they make money, if they are “successful.” I suspect more SABB behavior is tolerated.

I wonder if health care systems should not require personality profiles before hiring physicians. It is easier to withhold a position than to withdraw it. Most of these disruptive physicians can be identified in advance. Some malpractice insurance companies have started this practice and do not offer policies to the SABB physician.

I am no longer in practice. My peer review responsibilities are shrinking. I have never been corporate. Now I only experience SABB behavior at social events where it is irritating but inconsequential. Maybe that is why I let it get under my skin.

Or maybe I wish I had a little more chutzpa myself, more self-confidence untempered by decades of behavior moderated for a professional medical setting. I admit that achieving a bit more self-expression is a Gap Year goal. Leaving the World Domination Summit I did affect a bit of a swagger.

Or maybe I wish I were out on a lobster boat where the organizational chart consists of one captain and one crewmember.

View all posts by Sam Harrington →
Gap Year metrics: how to fit it all in
Explore a new way of working (one of our Gap Year goals)