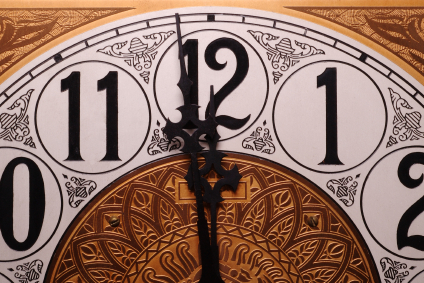 I recently returned from another week with my 92-year-old father. It was very pleasant and very quiet. The humidifier hums. The doors creak. The clocks tick. There is the occasional chime of the doorbell.

His world is shrinking around him and he knows it. It is hard to watch. It is frustrating. But people learn to put up with a lot of limitations. Life seems lesser and yet… it remains the life we have.

Time moves slowly in his apartment. He has so much time but is physically unable to use it. He suffers from fatigue that limits his physical abilities, including the ability to read extensively as he used to. He can think clearly but he rests most of the day to marshal his strength. His mind is strong but his limited reading limits its expansion.

Time stood still for me for that week. I never had so much time. It was a great luxury to be with him – and also a burden to bear.

Of course, time is not a luxury available to the primary care physician. There is never enough of it. One goal of my Gap Year is to embrace that new luxury and experiment with it.

My first opportunity occurred on the flight out to his Midwest City when storms over Detroit diverted all flights and created a five-hour delay. Uncharacteristically, I was completely relaxed.

For the first time, a travel delay didn’t matter

Traveling alone and without a critical agenda, with a weeklong visit ahead, what did a delay or even an overnight stay short of my destination really matter?

While I was practicing medicine, every day off was precious and every trip a surgical strike. To lose a day to a travel delay on the outbound phase was to lose a day of vacation, of well-planned time off, of valuable relaxation or of time with an elderly relative (my dad, for example) whom I didn’t see enough. To lose a day on the return threatened my colonoscopy schedule.

Knowing that patients were starting their colonoscopy preps the day before their exams while I was returning from a trip, shuffling through the boarding gate with boarding pass in hand, was a time of real tension for me.

If the flight was delayed or cancelled due to weather or a mechanical delay, could we make alternative plans to get home to DC in time? Should I call each patient and ask him or her to stop the prep and reschedule?

Some patients embraced the prep as a day of fasting and cleansing. Others stumbled through it without complaint. Some tried to squeeze it in around an otherwise jam-packed schedule of meetings and travel.

But most felt that the prep was a significant burden. It was disruptive, unpleasant and the worst part of the procedure. To finish the prep and to be told to reschedule was not an option for them. They would not do it twice in a five-year time frame.

When I was practicing, I couldn’t let my patients down

Alternatively, in the scenario where I failed to get back for the morning exams I could have asked my partner to cancel his schedule and take over my procedures. This was anathema to me. These patients had chosen me. They trusted me. They were purging for me.

They believed in my expertise and my touch. To let them be treated by someone else (even my own partner, who was equal or better than me) was impossible for me to consider. It would mean that I had an acceptable substitute.

I have just described the balance of the personal versus the professional in living one’s life. As a former practitioner, the professional commitment can be all consuming. To complicate this balance I have inserted a third factor, physical ability or well-being.

My father is retired and, clearly, at age 92, has time to spare. But his physical condition has shrunk so that he has little left to fill his days. My professional commitment weighed heavily on me for decades, leaching time from my personal space. Now I have time.

The luxury of enjoying time AND good health

I have shed the responsibility that only a treating physician can shoulder. I miss that trust. I miss the sense of self-importance, inflated though it was.

But I am enjoying the carefree freedom of time while I am physically able and before age or disease slows me.

View all posts by Sam Harrington →
One Morning in Maine: Why I don’t miss practicing medicine
Life on an island: an annual hard reset