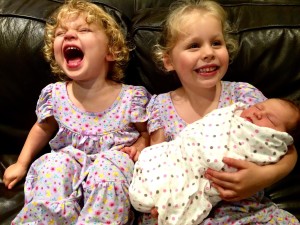 The highways and byways of Brooklyn are a mystery. We woke this morning in our garden apartment, less than a block from one of the noisiest thoroughfares in downtown Brooklyn. But it was surprisingly quiet, as it had been overnight. Thank goodness. My nerves are shredded after scarcely 24 hours in the big city.

I was yearning for a different thoroughfare this morning. Namely, the Deer Island Thorofare which we can see from our bedroom in Stonington. Plus the vermilion sunrise which is an almost daily phenomenon because our windows face east. Here is where Sam should jump in and say, “Ha! I told you so,” referring to the overstimulation of Brooklyn. But he is polite and he didn’t.

Let me tell you more about life in the big city. I made coffee and oatmeal in our not-quite-but-almost-a-kitchen. I.e. no oven and everything else including fridge is miniature; no dishwasher, of course. I moaned about how dark it was in the apartment. Garden level actually means subterranean.

Then I decided to hunt via Google Maps for the “best wifi café” nearby. The results showed more than a dozen options within 10 minutes walking distance. And dozens more if I were to venture further into neighboring parts of Brooklyn: Cobble Hill, Carroll Gardens, Park Slope, Fort Greene (much cooler), etc. Brooklyn is a very big place. I was overwhelmed. I was paralyzed. I was still in my nightgown.

I got dressed. We made a shopping list (sponges, paper towel, etc.) and set out for the nearest Rite Aid. But first we stopped at Equinox, the super cool sports club a few blocks away. I’ve been there a number of times as my daughter’s guest and love the place. Multilevel facility, every machine, yoga studios, etc. The nice membership guy told us that if we stayed in Brooklyn for two months we would qualify for a much lower monthly fee. Right now, one month is looking like enough. 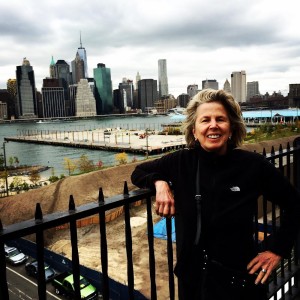 Brooklyn: view from The Promenade

I gave up on exercise for the day and we walked straight to Shake Shack for an early lunch. Why not? Afterwards we took a brisk walk on the Brooklyn Heights Promenade with its stunning views of the Statue of Liberty, the Manhattan skyline and Brooklyn Bridge. OK, this felt better, even though it was a gray day.

Then it was on to our oldest granddaughter’s preschool for the 2:00 PM pick-up, accompanied by her nanny. Otherwise they wouldn’t let us in. This happy event was followed by another: a 2:15 PM phone conference with our real estate agents. Inexplicably, we’ve had two offers on our house within two days, after no activity for many weeks.

And now it’s 4:30PM and we’re headed to our daughter’s apartment a block away from where we’re living to meet TNO, “the new one,” her newborn daughter, born two days ago. The baby has two older sisters. No name yet, but soon, we’ve been promised.

Several hours later… she is Libby!

She has a name! Libby Minor Myers, weighing 8 pounds, 11 ounces, was born Sept. 30, 2014. She is pink and perfect and plump. And it is total chaos at their apartment. We help with baths (shrieking and splashing) and (many) bedtime stories. And leave, panting, at 7:30PM. Oh, and we now have a signed contract to sell our house in D.C. Sad, but good to have it resolved.

Just another day in the big city.

View all posts by Debbie Weil →
Magical: On Writing a Poem (or Two or Three) a Day at Haystack
Sam vs. Debbie on the Yin vs. Yang of Stonington and Brooklyn