{Update from Sam} In case you think that I am only concerned with old age pensioners, death, and dying, here’s a thought on a different subject.

I can’t look at, drive over, or walk on the Brooklyn Bridge without remembering that it is built with granite from Carver’s Harbor on Vinalhaven, a small island community on the coast of Maine.

Similarly, my adopted community of Stonington on Deer Isle contributed granite to New York City’s Triborough Bridge, The Statue of Liberty, Rockefeller Center, and the JFK Memorial in Arlington National Center, among countless other buildings, foundations, and statuary.

This is a reminder that great edifices, literally and figuratively, rely on small villages for their foundations and support. 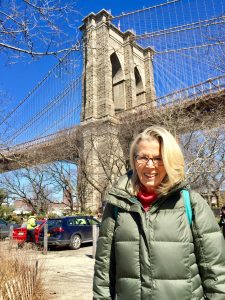 When the bridge was built, Brooklyn and Stonington were not that different in terms of economic vibrancy, although they have grown apart in this regard. Brooklyn has expanded and Stonington has shrunk (although Deer Isle has produced the best sailors in the world and Stonington remains the most important lobster port in the world, today – a point of enormous pride to those of us who call it home, no matter how late we arrived there).

How to recognize, appreciate, and bridge the divides between the rural villages like Stonington and the urban villages that together make up Brooklyn?

Immerse yourself in both and savor.

The wheels might be slowing down, but my gerbil is not dead yet.

View all posts by Sam Harrington →
Getting to Your Happy Place: How Long Does It Take?
Déja Vu All Over Again: Three Physicians: