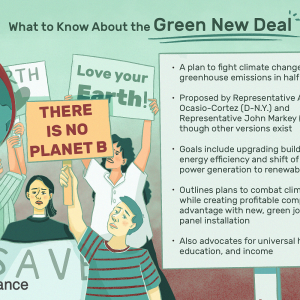 Today’s post is written by Debbie’s cousin Andy Franklin, a longtime and loyal reader of this blog.

During the Presidential primary season we heard talk about a Green New Deal that was generally associated with the “extreme left” of the Democratic party.  The Green New Deal is a House Resolution, introduced by Rep. Alexandria Ocasio-Cortez (D-NY) in Feb. 2019, that is a roadmap for what needs to be done to get the U.S. to be carbon neutral (actually, to cut carbon emission by 71%) by the year 2030 and carbon zero by 2050. These goals are modest and are believed by many climate scientists to be the minimum requirement to limit global average temperature rise to 1.5 degrees Celsius. Beyond this 1.5 degree change, scientists warn that the earth will reach a tipping point where there will be catastrophic and irreversible global warming which will be devastating to life on the planet.

Rep. Alexandria Ocasio-Cortez (D-NY) has been labeled by Republicans as a far left nut case. Senate Majority Leader Mitch McConnell maligned the proposal and quickly stopped the resolution from moving forward by forcing a vote on the floor of the Republican-controlled Senate. Nevertheless, this climate proposal has taken root in Europe where the European Parliament is about to adopt legislation called the “Green Deal” (always named in English) that would bind its 27 member countries to achieving similar goals.

Your children’s and grandchildren’s lives will be very adversely affected if the Green New Deal is not adopted soon.

How did this happen? I strongly urge you to listen to this Science Vs podcast, which explains how young activists in Europe were inspired by Greta Thunberg’s passionate plea before the UN. Thunberg, TIME Magazine’s 2019 (youngest ever) Person of the Year, inspired students to skip school on Fridays and to demonstrate in the streets, demanding that elected officials take action, and prompting conservative leaders to embrace the Green New Deal proposals or lose votes.

Although the idea for a Green New Deal was born in America, it took the youth of Europe to embrace it and demand action. So, if America can no longer lead the world, then we must follow. I am calling on the youth of America to become climate activists, to take to the streets and demand that our elected leaders follow the lead of the European Union in enacting legislation that addresses our need to stop burning fossil fuels and to create a new green economy with good jobs that will bring prosperity and pride to our country.

I am an aging Boomer. When I was in my 20s, our country faced serious issues. An unpopular war in Vietnam, with no clear goal, was killing too many of our generation. Seemingly intractable racial violence and women’s inequality were among the moral issues of our time (although both continue to this day). Our generation took to the streets to demand action from our elected leaders. It wasn’t always a straight line toward solutions and there were some who acted out violently, harming the cause. But with continued and persistent pressure, our elected leaders heard the calls for change.

Although this blog is aimed at Boomers reinventing their lives in their retirement years, this same audience has children whose lives will be very adversely affected if the Green New Deal is not adopted soon. If Europe and the U.S. can change their economies away from ones that produce greenhouse gases toward ones that rely on clean renewable energy sources, that will prove to the rest of the world that it can be done and China and India and the rest of the world will follow our lead.

So I urge you to speak to your children and grandchildren about the need to “take to the streets.” To build a real movement of young people in America to demand that our elected leaders take the Green New Deal seriously and enact legislation very soon that will change the situation on the ground and prevent us from slipping into an unlivable climate.

I will be talking to the young people in my family about this. I hope you will do the same. Although literally “taking to the streets” may have to wait a few months until the pandemic is behind us, there’s no time to waste. The groundwork for this movement can begin immediately with protests beginning this Spring. Let’s all make this happen!

Editors’ Note: While President-elect Joe Biden does not specifically support the Green New Deal, he has made addressing the climate emergency a central part of his agenda. But that is not enough. We need European-style protests by students to persuade the Republicans to engage and not obstruct and to move public opinion to press for legislation that will save the planet. – Debbie and Sam

IMAGE CREDIT: About the Green New Deal (The Balance)

Andy Franklin is a retired but still curious software engineer who lives in Boulder, CO with his wife, Audrey, and Golden Retriever. His baby granddaughter, Max, lives in The Hague.

View all posts by Debbie Weil →
Alex Trebek’s Legacy: What Has It Taught Us?
Was Dr. Birx correct about excess COVID deaths?

4 Responses to It’s Time to Take to the Streets: The Green New Deal could save the planet for our grandchildren