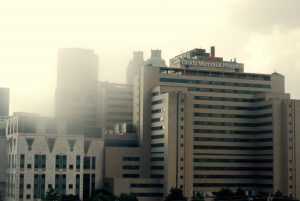 Grady Memorial, the sprawling public hospital in Atlanta where I trained.

{Update from Sam} Natural selection is a process that many non-scientists deny in terms of evolution but embrace as an explanation when elderly people die because of the inability to outrun flood waters or a fire. Those deaths are caused by natural disasters and represent, to some, a “culling of the herd.” Through science and engineering we mitigate those disasters with flood levees, fire breaks, and controlled burns.

Pandemic illness is another form of natural disaster. Similarly, science teaches us to mitigate the spread of pandemic illness with modifications in social behavior and to minimize fatalities among the infected with general medical technology and disease specific treatments.

The successful treatment of infectious diseases represents some of modern medicine’s greatest advances. Still, infectious disease can have tragic consequences. Most, but not all patients respond to antibiotics. Poor antibiotic utilization leads to antibiotic resistance and increased mortality. Sometimes infections cannot be cured before they have caused permanent damage. Examples of this include brain damage from bacterial or viral meningitis, or organ failure and gangrene from sepsis, the widespread breakdown of the immune system caused by toxins and cytokine storms.

Widespread infections are inevitable until herd immunity is achieved. As a result, we understand that some people will inevitably die. And one could argue that failures of antibiotic treatments are a variation on the process of natural selection. But sometimes people die because mistakes are made either at the level of governmental and social mitigation or at the medical delivery level. This is not natural selection. This is science denial and poor preparation.

The reports that the ICUs in Texas and Arizona are now at full capacity are evidence of such consequences. The Federal and state governments have failed to mitigate the pandemic adequately. And, as a physician, I know that people, who would otherwise have survived the pandemic are going to die. They are going to die because society did not supply the means to wait out the disease process pending a vaccine and they are going to die because medical care will be rationed, and mistakes will be made by overtaxed doctors and nurses in an overburdened system.

When I was a medical resident, I experienced two episodes when the system I was working in was overwhelmed. Memories of the related failures and mistakes born of overwork remain with me today.

The first occurred in the late 1970s when I was a junior resident in the emergency room of a large public hospital in Atlanta. It was the middle of winter. This Southern city was unprepared for the coldest night of the year. Street people were arriving in droves with symptoms of the flu and hypothermia. The ER was overwhelmed.

One coughing, bearded, bedraggled, and presumably homeless man of indeterminate middle-aged years, was triaged and assigned to me by the senior resident. Because he was walking and talking, and in the absence of a vacant gurney, he was placed in a multiple use, wooden lounge chair. I introduced myself, explained that I would be right back, and went to wrap things up with my last patient. When I returned, and I don’t remember how much time had passed, he was dead. Not just dead, but cold and dead. The ER was so busy, overwhelmed in every respect, that no CPR was attempted. He was pronounced dead and taken straight to the morgue.

In today’s world of quality control, and in current hospital lexicon, his death would have been treated as a “sentinel event” or a “never event” – something that should never, ever, occur in a well-run hospital. On that day, and in those circumstances, he was just another statistic.

Misfortune Awaits Those Treated by the Unprepared and Understaffed

A year later, I was the senior resident in the same ER. Now I was doing the triage, the discharge reviews, and handling the worst crises. On this particular evening, two patients were brought in simultaneously from the immediate neighborhood. From one side of the hospital, a middle-aged man arrived in cardiac arrest. From the other side of the hospital, a mid-thirties female arrived in near cardiac arrest. He had been arrested for criminal activity and suffered a heart attack in the Forsyth County jail. She was a young mother taking evening classes at the community center when she suffered a seizure, collapsed, and choked on her vomit.

Now I cannot begin to describe the organized chaos that occurs during the initiation of CPR, situating the patient on a bed board while starting the IVs, managing the airway, compressing the chest, and drawing blood – but we have recently seen images of it on enlightened news casts. Suffice it to say that one cardiac arrest is a challenge and two, occurring simultaneously in an era before today’s staffing and equipment redundancies, are a catastrophe.

Fate intervened. He lived. She died.

Every pandemic will cause death. But no one’s death should be the result of avoidable medical mistakes. Yet, in the crush of critical illness, caused by prematurely relaxed social distancing and the inadequate use of facial coverings, thousands of fatal mistakes will be made in overburdened ERs and ICUs. Unnecessary deaths equal unnatural selection.

View all posts by Sam Harrington →
What Covid-19 Teaches us About A Good Death
Listen to Debbie’s podcast!

One Response to Houston, We Have a Problem: A Retired Physician Remembers Fatal Mistakes