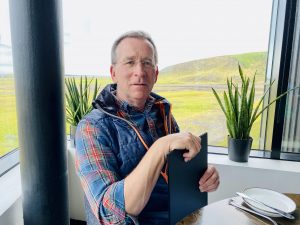 {Update from Sam} When I went into the practice of gastroenterology and internal medicine 40 years ago, I was excited about being the new kid on the block. I was well trained in the most up-to-date treatments and endoscopic techniques. I was looking forward to a busy career.

New techniques were on the horizon. I was excited about preventing colon cancer, inserting balloons into the stomach to promote weight loss, altering pressure in the lower esophagus to cure reflux, and more.

The occasional patient with a bleeding ulcer or a common bile duct stone was the reason to go to the office every day but more mundane problems represented the bread and butter of my work. A large subset of patients in any general GI practice has some variation on irritable bowel syndrome (IBS – a non-progressive disorder of abdominal symptoms with varying degrees of cramping aches and pains and waves of diarrhea or constipation) and sorting through their symptoms was an interesting challenge with a pleasant reward if the symptoms could be improved with simple dietary measures and life-style changes.

A less frequent, but all too often, challenge was the patient with IBS that overlapped with another chronic, somatic symptom such as chronic fatigue. These patients represented an emotional drain for me and many other physicians. Intellectually, I knew there was nothing that I could do for them with routine diets, medical treatments, or scopes. Medical school had not prepared me for them; in fact my medical education and training was largely dismissive of somatic pain syndromes.

At the time, the mid-to-late 70s, these patients were thought to have a largely psychiatric disorder tinged with a hint of a malingerer. These were patients with unquantifiable symptoms and undefinable problems, who usually had a history of failed treatments and complications with standard Western medical practices and a broader history of dabbling in alternative medical practices. To top it off, they appeared helpless and depressed. Or am I projecting?

The recognition of fibromyalgia as a diagnostic entity, but without known cause, was published in a major academic journal in 1987. The connection between Epstein-Barr virus and chronic fatigue was defined by the CDC in 1988. The recognition of Lyme Disease as associated with multiple inexplicable manifestations (including chronic fatigue, fibromyalgia and other idiopathic pain syndromes) came in 1991 when the CDC began a national surveillance program.

Heretofore, those associations were being made by a few responsible physicians and a large group of fringe physicians marketing wildly disparate treatment regimens based on pseudoscientific theories and occasional bio-plausibility. Even in retrospect, recognizing that some of these fringe players were on the right track, most were charlatans.

But a young, energetic physician, interested in scoping patients from top to bottom, had no extra time for studying these infectious disease issues, for sifting through the reams of medical records these patients had acquired, or for the compassion and emotional support these so-called malingerers needed.

(At that point) I began to change my perspective on the mystery of chronic illnesses caused by infectious diseases.

My perspective began to change when I read Seabiscuit: An American Legend by Laura Hillenbrand, published in 1999.  The book is a masterpiece of writing and storytelling but what caught my attention was that Ms. Hillenbrand suffered from chronic fatigue syndrome and lived a stone’s throw from my office. How could someone, effectively a neighbor, suffer from this malingerer’s syndrome and create such a compelling work?

Somehow, without the benefit of meeting her, but knowing that a gifted author was living a life trapped by inexplicable fatigue, her story resonated with me and I began to change my perspective on the mystery of chronic illnesses caused by infectious diseases.

Fast forward to the final years of my practice. I was no saint, but I was much more sympathetic to the mysteries of chronic fatigue and chronic pain syndromes. As one of my mentors, Jim Kane, a Washington DC infectious disease specialist and a middle-of-the-road practitioner when it came to diagnosing and treating chronic Lyme disease, said, “Sam, the practice of medicine is humbling.” I generally found more time for my IBS patients, especially when they overlapped with chronic fatigue symptoms.

Now, nine years into retirement, it appears that I must have developed some empathy too, because two years ago, when COVID 19 first rolled across the country, my greatest fear was the possibility of “long COVID.” It didn’t much weigh on me that I might die from it (although I knew intellectually that was a possibility) and I assumed that I would eventually get it, but my real fear was developing a prolonged case of inexplicable symptoms, which at my semi-advanced age would be life changing, in the sense that any new major problem would define the last chapters of my life.

And then I returned from Iceland.

In Which I Contract Viking COVID

In early July of this summer Debbie and I took two grandchildren, curiously compatible cousins, on a Backroads adventure around the south coast of Iceland. It was challenging in a variety of ways but wonderful until five hours after touching down in Boston on our return when suddenly I noted that I had a sore throat. Remembering that one of our guides had dropped out of the trip after testing positive for COVID, but reassuring myself that I had had no close contact with him, I antigen tested myself and, you guessed it, I was positive.

Hoping to recreate Debbie’s good experience with Paxlovid (she took it starting on Day 1 of testing positive for COVID and tested negative on Day 6 feeling completely well), I started the medication the next day and isolated for five days with mild symptoms of fatiguability, congestion, a scratchy throat and some COVID brain (in my case fogginess and distractibility). I tested negative on day nine and ten and happily reemerged into society.

Then on day 11 some throat symptoms returned and I tested positive again. I remained positive (and isolated) until day 17 when I finally tested negative. Feeling well enough to exercise, I started trying to recapture my former self.

Day 20 started out uneventfully. I felt fine. I went for a morning bike ride, did some work, had a meeting with town elders, went to an early theater performance with friends – despite feeling exhausted – and went to bed after a late dinner.

At 2:00 AM, as is my practice, I took a middle of the night trip to the toilet (if you are 70-year-old man with a prostate, you know the drill) and sometime later I found myself on the floor in front of my bureau. Clearly, I was not thinking clearly, and I crawled into bed where I slept fitfully while asking myself intermittently, “Why does my shoulder hurt?” “Why does my neck hurt?” “Why does my face hurt?” I woke in the morning to find my face covered in bloody abrasions and my neck and shoulder creaking.

Ever the diagnostician, I performed a neurologic self-exam ruling out a brain tumor and discounting a seizure (despite finding a lacerated tongue).

In retrospect, it was clear that I had passed out and had tried to break the bureau with my face before settling onto the floor to recover. Ever the diagnostician, I performed a neurologic self-exam ruling out a brain tumor and discounting a seizure (despite finding a lacerated tongue). I settled on the most likely possibility of having suffered from post-micturition vasovagal syncope (translation = fainting after taking a pee). I suspect that the confusion I suffered was related to a mild concussion.

After crawling around the upstairs to retrieve my blood pressure cuff, I quickly established that my blood pressure collapsed when I stood up, supporting my diagnosis of postural hypotension, aka orthostatic hypotension, which threatened to deprive my brain of oxygen, yet again. So, I hydrated and rested and eventually my BP stabilized.

It was at this point that I woke Debbie, dressed my abrasions, and declined to spend the day in the ER. Debbie is a very good sleeper so she hadn’t heard the middle-of-the-night thump but she gets quite excited about issues related to my health, so I felt it best not to involve her until I had a good working diagnosis.

Later that morning, and on each of the subsequent mornings, I established that when I had a full bladder my blood pressure was abnormally high, and when I emptied my bladder, it fell significantly to a lower-than-normal value. If I combined the physiological event of emptying the bladder, while sitting, with immediately standing up, the blood pressure fell precipitously to dangerously low readings. My diagnosis was now confirmed and refined to include post-COVID dysfunction of the autonomic nervous system.

Prolonging an already prolonged isolation, I was now trapped at home with a scabrous face. In short order, I visited my primary physician, who begrudgingly agreed with my diagnosis but insisted on performing the routine X-rays and cardiac tests to exclude more serious problems.

Fortunately, those tests were negative, and over the last several weeks, the objective blood pressure changes have diminished. At first, the swings from high to low lessened. Ultimately, my BP seemed to normalize. However, the subjective symptoms of distractibility, fogginess, struggling for words, mild dizziness, and balance issues (intermittently, I felt like a sailor during the first days of shore leave) though better, have not disappeared. Unnervingly, one morning, more than six weeks since the initial diagnosis and nearly three weeks after falling out, my blood pressure was objectively orthostatic again. (Orthostatic means your blood pressure changes dramatically when you stand up – not good.)

“It Could Be Worse or You Might Get Better, But You Won’t Get Well”

Fearing a relapse, anxious about a downhill slide, and concerned that I felt I had aged ten years in less than ten weeks, I ordered New York Times columnist Ross Douthat’s book, The Deep Places: A Memoir of Illness and Discovery, in hopes of gaining insight into coping with chronic illness following Lyme disease.

A searingly honest chronicle of the trials of intractable pain, it proved to be an effective morale booster – in a backwards way.

Chronic Lyme disease has defied the ability of Western medicine to qualify, quantify, or treat its myriad symptoms and iterations. It has driven thousands of sufferers, including Mr. Douthat (and I am saying this very sympathetically) to the insanity of despair and to such desperate measures that, to avoid suicide itself, they adopt unproven (and unprovable) treatments – some of which have potentially life-threatening complications themselves. I learned from his book that I could be so much worse.

Technically, at this time, I am somewhere between “post-acute COVID” and “long COVID.” Now, I must start following the advice that I used to give to patients, not that I can remember what that is given my COVID brain. But let me try to reinvent it here.