Pamela Druckerman, author of the bestselling Bringing Up Bébé, recently wrote in the New York Times about Americans in Paris. She divided them into three groups: those that have to be here for their jobs or their spouse’s jobs; fantasists who come and stay longer than expected because they identify with famous expats like Hemingway and, finally; dreamers who simply want to learn and absorb French culture.

The first group frequently settles into a parallel universe of Anglophones. The second group happily lives their fantasy. The third group suffers the consequence of dreaming of assimilation in a cosmopolitan world that will never accept a non-Parisian. Never.

It is clear that Debbie and I fall into the third category of visitors. We each had positive experiences in France during our respective youths. We were accepted for who we were: Debbie in Chambon-sur-Lignon and myself in Pithiviers. We genuinely cared for our hosts (Debbie was at a boarding school) and they embraced us.

We wanted to recapture that positive feeling with our extended stay. Except for brief moments, it is clear after a few weeks that Paris is not the place to do it.

My French prof at the Alliance Française divides her language lessons into three levels; legal and literary French (well above our skill set); standard French (the goal for everyday reading and writing and acceptable for polite conversation); and spoken French with rapid fire elisions, colloquialisms, and polite slang. It is clear to me that no matter how much my spoken French improves it will never be sufficient except in conversations with my few close French friends.

In the U.S., when a foreigner asks a question, an American will generally pause, overlook any grammatical errors and compose a slow verbal response that guides the questioner and simultaneously seeks clarity. In Paris, a Parisian will respond with a rapid fire restatement of the question simultaneously correcting the grammar and finding a way to signal that the question was the product of mental simplicity.

At the first evidence of comprehension the Parisian will pick up the speed of their responses, throw in some argot and, if necessary to further confuse the foreigner, add a bit of vers-langue, a youthful patois created by inverting syllables (metro becomes tro-me) or using antonyms as synonyms.

Just for fun, and so as not to paint a picture of constantly rude encounters, let me relate a memorable moment. 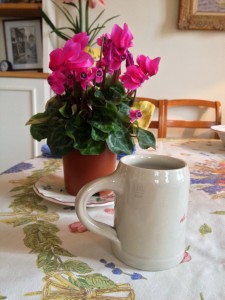 One hundred meters from our apartment, at the head of our local market street, is a studiously traditional brasserie (pictured above in a rare moment of sunlight). I enjoy it because the wood floors, the wooden bar, the decorations and the hole-in-the-floor toilet are signs of a resistance to change and modernization that exceeds my own.

It has been my custom to stop at the bar for a “un demi bière pression” (beer on tap) every evening before making my grocery shopping rounds. This translates into five nights per week of patronage. The barmen know my face. Frequently Debbie will join me. When she does she often asks how much it would cost to buy a bar mug as a souvenir. The response has been, in rapid-fire French, “They are not for sale, we do not have enough.” Last night, the bar man gave her the stock reply. Then, without another word, he picked up a mug,  reached over the bar and slipped it into her bag.

I know what my Christmas present will be.

View all posts by Sam Harrington →
Paris: Dark Corners in the City of Light
Midpoint Review: “Why” a Gap Year